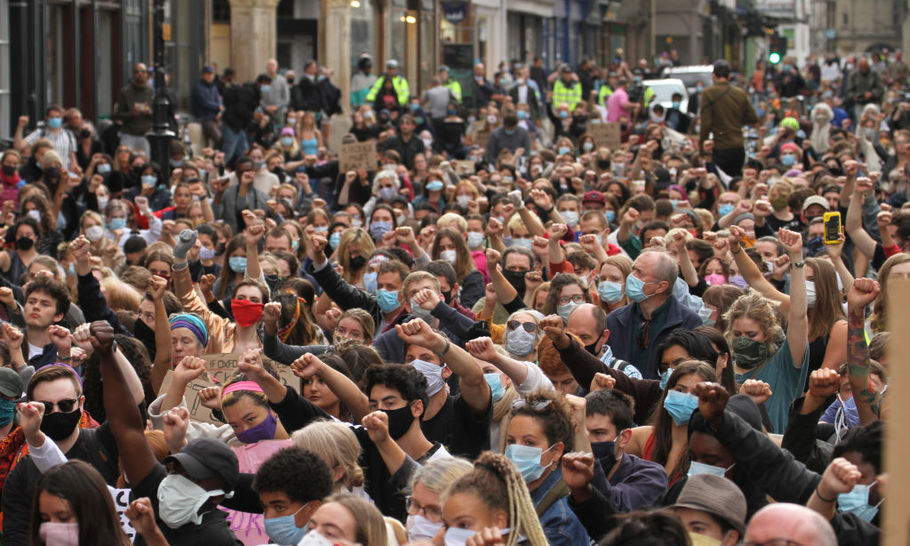 There is perhaps no better marker that a political movement has arrived than when its slogans are echoed by a famous ice cream maker. So when Ben & Jerry’s released a statement calling on people “to take concrete steps to dismantle white supremacy in all its forms”, it was clear that something had shifted.

The company has joined other businesses, public figures, and the Church of England in decrying the West’s alleged culture of “white supremacy” after the killing of George Floyd in the US. The Archbishop of Canterbury Justin Welby said: “Systemic racism continues to cause incalculable harm across the world.” Tim Cook, chief executive of Apple, described the “everyday experience of deeply-rooted discrimination” that non-white people face. “To be silent is to be complicit,” was the view of the streaming service Netflix, while the fashion company Dior said, “we are allies in the fight against racism”.

Celebrities were equally effusive, with Kim Karsdashian confessing “the privilege I am afforded by the colour of my skin” and the pop star Taylor Swift accusing US president Donald Trump of “stoking the fires of white supremacy and racism” throughout his time in office. Meanwhile One Direction’s Harry Styles wrote online: “I do things every day without fear, because I am privileged, and I am privileged every day because I am white. Being not racist is not enough, we must be anti-racist.”

What is striking about such statements, which appeared alongside bromides about peace, love and justice, is that they echo the language of previously obscure social justice activism. Such terminology speaks to a particular view of racial, sexual and other inter-group relations that is profoundly different from the old liberal focus on individual rights.

“White supremacy”, for example, is usually associated with neo-Nazis and skinheads who seek white dominance and even deportation for non-whites — the kind who make fodder for a Louis Theroux documentary. Cambridge University Press defines the term as “the belief that people with pale skin are better than people with darker skin”.

Yet social justice activists have broadened the meaning, based partly on an academic movement called “critical theory”. Critical theory differs from the traditional sort in that it does not just seek to understand the world. Instead study is predicated on a desire to reform society to address injustices.

In this view “white supremacy” covers any aspect of racial inequality in a society, whether it be the job market, incarceration rates, health outcomes, or whatever else. A “white supremacist” likewise includes anyone who is not fighting against this system as an anti-racist activist, including those who only passively consider racism to be bad.

This view partly explains the widespread confessions among white celebrities for the privilege afforded them by their skin colour, as well as the videos circulating online of white people physically or verbally submitting themselves and asking forgiveness. The parallels to the religious concept of original sin are self-evident and troubling.

This is only the tip of things though. Under the rubric of critical theory, a broad ideology about “white fragility”, “complicity”, “unconscious bias” and much else has emerged. Had it remained confined to universities and obscure activist groups it would not have much mattered, but it has spread well beyond the campuses.

The calls to break up police forces in Minneapolis and other American cities are one example of this. Many social justice activists are revolutionaries, advocating for the wholesale remaking of societies alleged to be only serving white people’s interests. Rather than seeing Western societies as largely good and in need of reform, they are considered beyond repair.

One of the ironies is that many activists’ rhetoric implies a caste hierarchy that Western states, for all their problems, have moved away from. In what is sometimes pejoratively termed the “oppression Olympics”, people with privileged characteristics (male, straight, white, able-bodied) are to be relegated in favour of those deemed to have suffered oppression because of their characteristics.

The implications go beyond racism. Recent attacks on freedom of speech, attempts to educate against unprovable unconscious bias, and campaigns for quotas in education and employment are smaller signs of how a society oriented around demographic justice would detract from the individualistic liberalism that has dominated in the West.

Such change would be for the worse. Although the new social justice movements have highlighted genuine problems in Western societies, they’ve fostered resentment, blamed people for their ancestors’ actions, and created a culture where people’s lives can be ruined over minor social blunders.

These movements have only got so far because people in the West are largely sympathetic to promoting racial, sexual, and other forms of equality. Indeed, the receptiveness of public figures and companies to their ideas proves the central tenet of social justice movements wrong: our societies are not irredeemably flawed, but capable of improvement. The fight should be to continue this, not begin anew.