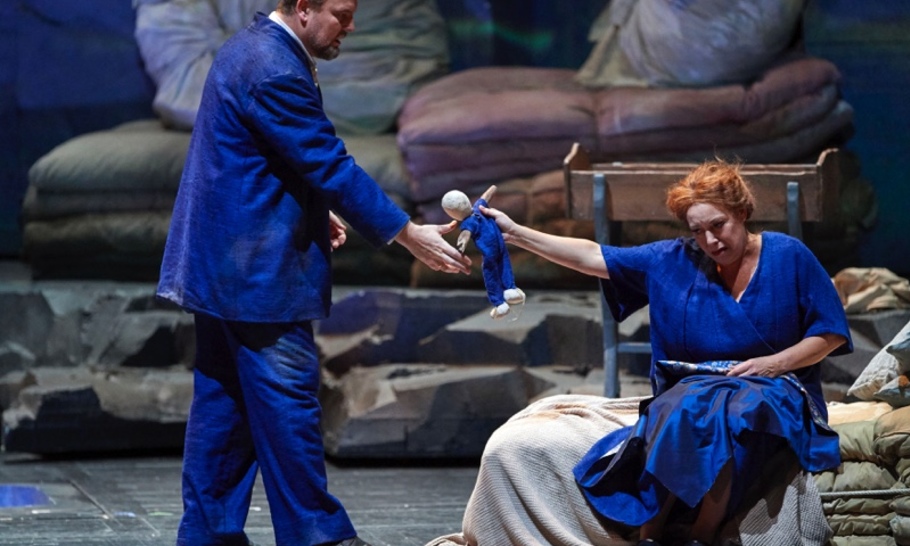 Exactly 100 years ago on Friday, 10 October 1919, Richard Strauss’s new opera Die Frau ohne Schatten (The Woman Without a Shadow) premiered in Vienna, and this centenary under the baton of Christian Thielemann provided a performance of huge clarity and power. With a superb cast headed by Camilla Nylund (Empress), Nina Stemme (Dyer’s wife), Mihoko Fujimura (Nurse), Stephen Gould (Emperor) and Tomasz Konieczny (Barak the Dyer) it brought to life this most abstruse of Strauss’s operas, and in the final quartet, after the Nurse has been banished from the spirit world the voices of the Empress and the Wife came shining through amid the huge orchestration, before giving way to the voices of the Unborn Children on stage holding candles. Resolution and redemption that left the audience spellbound, and after a moment’s silence they roared their approval, giving a standing ovation to Thielemann.

Strauss’s seventh opera, and the third in his collaboration with Hugo von Hofmannsthal, is an extraordinary work inspired by von Hofmannsthal’s urge to create an ‘adult fairy tale’. In 1911 he decided to bring Strauss in to new realms of fantasy, sorcery and symbolism, and promised him the first act by summer 1912, though clearly underestimating the task he had set himself, he began seeing this opera as the one Goethe had always hoped to write. When the director of the Vienna State Opera came on stage at the start to award Thielemann a facsimile of the annotated original score he compared this Strauss/ Hofmannsthal collaboration with the interaction between the earnest young composer and the audience-pleasing Zerbinetta in Ariadne auf Naxos, composed during the same period, but with Hofmannsthal in the role of the composer.

The symbolism has been called impenetrable, but the essence of the story is clear. Like Mozart’s Magic Flute, there are three levels of existence – here seen as the spirit world, the world of humankind, and a level floating in between, where the Emperor and Empress live. There are also two couples to bring together in harmony: Emperor and Empress, and Barak and his wife, who must each undergo trials. In Magic Flute these are overseen by Sarastro (named after Zoroaster), and here by Keikobad (a silent and invisible role named after the 13th-century Sultan of the Seljuk Turks, Kayqubad).

Only Barak and Keikobad are named – the others defined solely by their roles or characteristics, such as Barak’s brothers, the One-eyed, the One-armed, and the Hunchback. The saintly Barak embodies the strength of a camel (Hofmannsthal’s phrase), working to provide for his family, and Tomasz Konieczny gave him huge power, gentleness, and simple wisdom. As his shrewish wife, who reviles him as a “mule that walks along the abyss and is not troubled by the depths and the mystery”, Nina Stemme was sensational. The essence of the story is that the Empress, daughter of Keikobad, has been with her husband for almost twelve months without casting a shadow, and there are three days left to correct this or the Emperor will be turned to stone. The Nurse proposes the Dyer’s wife as someone who will sell her shadow, renouncing her unborn children, and the Empress and Nurse descend to do a deal. Yet the Empress, gloriously sung by Camilla Nylund, ensnared in this evil game, is innocently guilty, but enormously moved by the noble Barak. Although the Nurse succeeds and the shadow is released, the Empress declines to take it, though in Act Two during the trials she admits to doing that which she has not done. The lives of the Emperor and the Wife are now essentially forfeit, but Act Three brings resolution to the two couples, while the Nurse from the spirit world is condemned to the purgatory of human existence for ever.

Fully understanding the abundant symbolism, which includes the Emperor’s falcon and the Empress’s talisman, is a step too far, but the music creates its own implicit connections and understandings. Under Thielemann’s direction the beautifully played bass section helps give hidden meaning to the Nurse’s claim that Übermächte sind im Spiel (higher powers are in play). Unsurpassable singing from the five principals and supporting cast, with a production by Vincent Huguet that eschews additional imagery in favour of a simple staging, with mostly one imposing background set, and subtle lighting that allows a clever juxtaposition of the spirit world with humankind. A worthy 100th anniversary for Strauss’s glorious and most unfathomable opera.

The performance on 18 October will be broadcast live in HD.