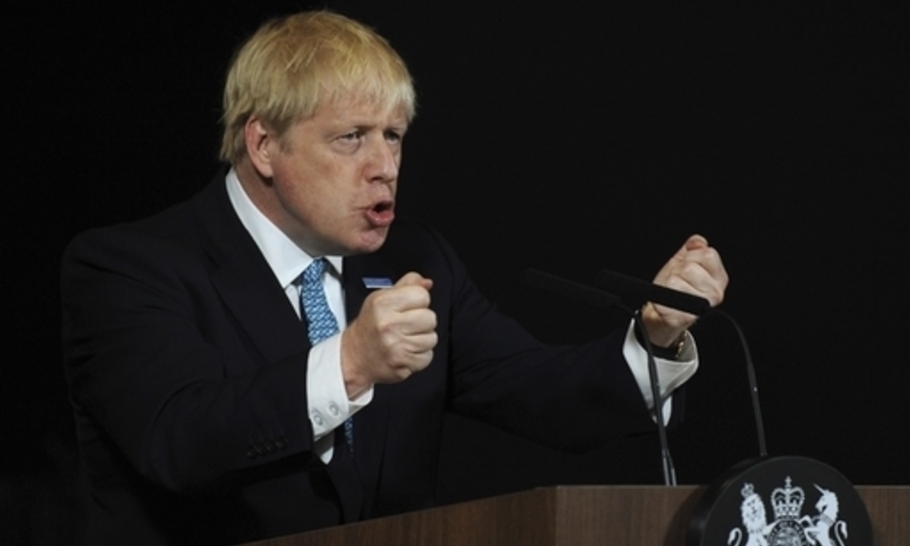 It’s that thing they do with their hands. When making each desperately important point, politicians just can’t help themselves from forming two fists with their thumbs perched on the top. There they will remain, pinching down doggedly, as if on a brace of invisible beermats, or an unusually confrontational pair of nipples. I expect you’ll have seen it, and are very probably sick of it. If you don’t know what I mean, watch any recent political speech or interview and inspect their hands as soon as that clarion call is given: “Let me be clear.”

First Blair did it, then Brown, then Cameron. May didn’t, and Johnson long tried not to — before Covid forced his hand. Corbyn never did, but Starmer does like clockwork. What we have is not quite an importation of the “Clinton thumb”, already road-tested by JFK, which jabs pointedly at the audience. Instead, it’s an appreciably tenser compression of thumb and fist. No-one knows what to call it, but Julia Louis-Dreyfus gave us a suitably dismissive term, when researching Vice-Presidential quirks for the sitcom Veep: this monstrosity is a “thist”.

Now then, let me be clear: no normal human makes this gesture. If a teacher ever tried it, they would be laughed out of the staffroom; if someone attempted it in the pub, friends would have a quiet word over by the gents. In ten years of university lecturing, I have never come close to doing it, whether by chance or design. Even the baby drifting unthinkingly towards a thumbsuck fails to find the position.

So why is seemingly every modern politician trained into this bizarre groupthist, a gesture totally unevidenced in the real world? Yes, we’re all taught as children that pointing is rude, and the finger-jabbing orator typically comes across as a censorious scold. Similarly, few would welcome fists rhythmically hammering the lectern, or raised in ill-judged triumphal salute. But why this total aversion to pointing with the index finger — literally named to do that job?

The expert advice, I presume, is that keeping hand movements to a minimum places focus on the words; the thist tempers any unhinged gesticulation. But, when politicians have so little to say, whether constrained by their whips or their wits, this seems an unhappy outcome. In our present nadir of parliamentary oratory, the hands really will need to do some talking. In fact, research shows that the most popular TED talks use 70 per cent more hand gestures than the least watched. Free and expressive use of the hands, changing organically with tone and meaning, clicks with an audience.

No doubt the firmly-held thist is intended to portray self-confidence and intellectual precision. In practice, its very oddness reveals a mixture of stage-managed artificiality and middle-grounded vacuity. The gesture, now several decades old, is a fossil from a different age of politics, when the warm embrace of centrism could carry the nation by a landslide. But in the jaded light of 2020, few, in truth, are moved by the glib words and polished smarm of the Macron-Trudeau-Starmer bureaucratic class. Instead, politicians prepared to take a principled stance on a difficult issue are admired for their honest convictions, however divisive.

If populism connotes anything meaningful as a term, it’s that a large proportion of the populace, seeing themselves as everyday people, are drawn to figures who seem (authentically or not) to understand their everyday concerns. This is hard to fake. Yes, Wilson and his pipe, or Farage and his pint, have been cynical confections, but at least these props were relatable. Yet the thist, with its self-satisfied, anally-retentive clutch, falls entirely flat. Tellingly, no doubt, the gesture has not impressed itself upon Trump, who endorses the lapidary phrases tumbling from his lips with a double-handed OK symbol.

Strangely enough, politicians don’t bother making the thist among their own kind in Parliament, on the benches or over Zoom. It’s all just a show for us impressionable folk on the outside. Instead, in the architecturally adversarial House of Commons, we find one political party arrayed against their literal opposition. Parliamentary business thrives on exposing the deficiencies of others’ arguments, albeit via courteous address of the speaker. Finger-pointing has never been banned, and pops up all the time. Look at historical pictures and you’ll find Pitt the Younger or Balfour pointing across the dispatch box, Disraeli appealing with open hand, or Gladstone with pointing fist aloft. In fact, almost every MP finds their finger extend when denouncing a particular Honourable Member or not-so-honourable party. That is part and parcel of live debate.

Why, then, can politicians not allow themselves such freedom of expression when encountering the public at large? Why do they cede all independence and idiosyncrasy to the soulless advice of the media trainee? Why give up the credible gestures of humankind to become yet another vapid Member of the Order of the Thist? Once “normality” returns to current affairs, perhaps we could adopt a simple rule for political speech: if you have something to say, stand up and say it however you like; if not, sit tight and keep your hands on your lap.