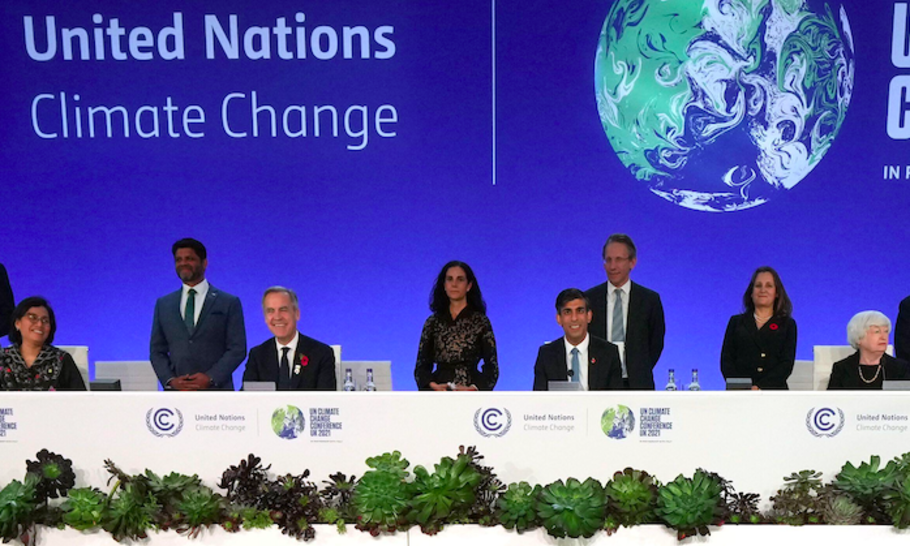 There are now sufficient funds to finance the global transition to net zero. That is the message from the COP26 Finance Day, which took place on Wednesday this week. We have to unlock more funding to move the global economy to a net zero emissions basis and the pledges are impressive. But they need to be examined carefully because it is not totally clear what they mean. Basic economics cannot be ignored and there is a lot more work to do. The big message from COP26 is that, one way or another, government action is required. Where governments lead, finance will follow.

The big announcement came from Mark Carney, former Bank of England governor and chair of the Glasgow Financial Alliance for Net Zero, known as GFANZ. The news was that GFANZ had over 450 members, from 45 countries, “controlling” assets of $130 trillion, representing 40 per cent of the world ’ s financial assets. Members are financial institutions such as banks, asset managers, investment consultants, stock exchanges, and ratings agencies. To sign up to GFANZ, they have to commit to various net zero emissions goals which will be integrated into their investment and lending decisions. Carney declared that this $130 trillion membership and the net zero commitments attached meant that the financial sector can deliver the estimated $100 trillion of finance needed over the next 30 years for the world to achieve net zero.

The $100 trillion figure comes from a study, entitled “ Net Zero Financing Roadmaps“  commissioned by the High-Level Climate Champions — individuals recruited to encourage and cajole sectors of the economy to make net zero commitments. The study, produced by Vivid Economics, concludes that $125 trillion of investment is required over the next decade for the world to achieve net zero emissions by 2050. Of this, 70 per cent could come from the private sector: hence the $100 trillion. The study suggests over half of this figure could come from the corporate sector, as companies decarbonise their operations, funded by their own balance sheets for example, with the rest from finance. The study makes projections of the investment required, based on an International Energy Authority net zero scenario, and assumptions about the carbon price and the relative costs from low versus high carbon technologies.

These are big numbers, but then the challenge is enormous. The global economy has developed around the use of fossil fuel energy and it will take time and resources for it to decarbonise. It has therefore been quite an achievement to marshal financial institutions to make net zero commitments. And while it is impossible to make a financial forecast with any useful degree of accuracy more than a couple of years out, the estimates of the investment required give a sense of the scale of the task. In fact, the requirement is larger than this because there are other costs, such as ensuring countries and communities experience a just transition, so that the poor are not made poorer by rich countries decarbonising.

The numbers do raise questions, however. It is difficult to see how we can conclude that because financial institutions responsible for $130 trillion have made net zero commitments, they will now direct $100 trillion to finance the transition to a low carbon world. The COP26 statement makes the link, but does not explain how it is made. The $130 trillion includes all sorts of funds, including pensions and savings, and bank loan books too. An investment fund invested in pharmaceutical company shares, for example, is not about to fund a wind farm in South Africa. A mortgage provider in the UK is not about to fund efforts to prevent deforestation in Brazil. There are no data linking GFANZ members to the increased investment required.

Another important question is: whose money are we talking about? The $130 trillion is not a figure sitting on the combined balance sheets of banks, fund managers and consultants, owned by their shareholders. It is money already doing something, owned by others such as companies, pension schemes, and households. It cannot be shifted around arbitrarily. Considerations of risks and (sustainable) returns do matter. Ignore them and we will have problems bigger than any mis-selling scandal seen to date.

Governments look at aggregate figures for the financial sector and wonder why some of that vast amount of money cannot be used to fund policy goals. That is too simplistic and betrays a misunderstanding of the financial sector. However, the role of government is vital. Perhaps the private sector can indeed provide $100 trillion of investment to save our world from global warming. But this figure is based on a scenario that sees the world align to a maximum temperature rise of 1.5C. That is going to take government action.

Subject to any responsible investment criteria investors may have, finance responds to where it can see the highest return for lowest risk. That is probably why global banks are continuing to fund fossil fuel projects. Finance will play by the rules but the rules need to change. The externalities, those costs to the environment that companies incur but which we all pay for, need to be internalised. And net zero rules need to apply to everyone, private as well as public listed companies, to avoid what Blackrock CEO Larry Fink warned was becoming “ the biggest capital markets arbitrage in my lifetime ”.

This is why Mark Carney stresses that financial institutions cannot tackle climate change by themselves. They need government “…to provide the commitment, clarity, and coordination required to accelerate progress. Without such policy action, the world cannot achieve an orderly transition to a net-zero global economy.” Last month, he wrote in the   Financial Times that governments needed to institute carbon pricing, ban internal combustion engines, stop subsidising fossil fuels, and require companies to make climate-related financial disclosures. Some of these rule changes are happening. For example, the UK government announced at the Finance Day a commitment to tighten financial regulations further in pursuit of net zero. The big one, global carbon pricing, seems some way off.

Finance wants more, however. It also wants governments and multilateral institutions to stand behind the more risky investments, protecting it against losses. This is the socialisation of investment, in this form a subsidy from taxpayers, and it is needed when markets fail. However, some of those risks, especially in emerging markets and new technologies, are real. This raises important questions about who pays and who gains. Government does need to stand behind decarbonisation because time is not on our side. It should do so while promoting a dynamic market economy, not trying to pick low carbon winners but putting the right market incentives in place.