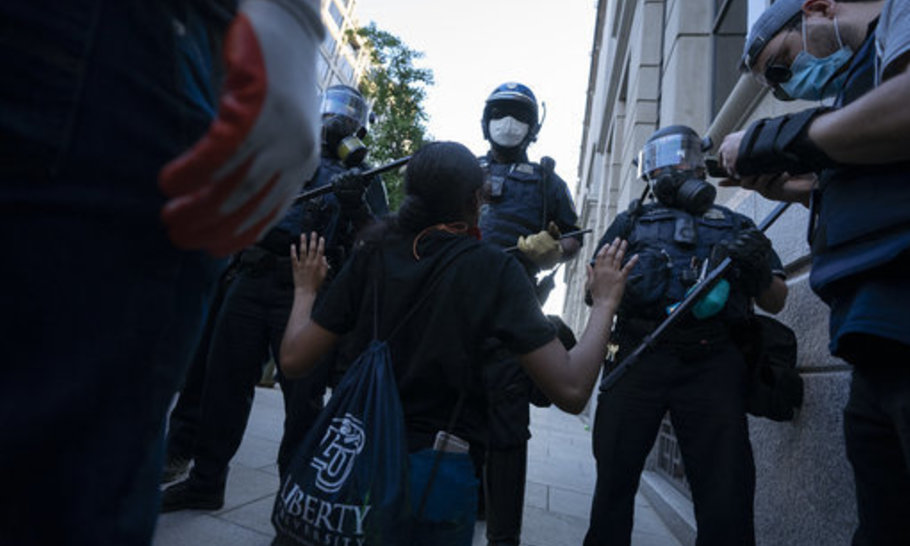 One of the most extraordinary headlines I came across last week topped an article in the magazine Live Science, and read “Will the US Really Experience a Violent Upheaval in 2020?” On first view, you may think this unremarkable, but written in 2012, it was amazingly prescient. Looking at America’s renewed convulsions and divisions over race, this article, which cites the work of tracing historical patterns, reminds us that the simple comparison between now and the late 1960s is narrow historically, and inadequate as a reflection on what’s happening now.

An elementary Wikipedia “civil unrest” search reveals the frequency and regularity of public expressions of outrage and protest, riots and insurrection. The list of 380 or so incidents going back to the 18th century is probably incomplete and makes no mention of the campaigns against Native Americans by American settlers or armed forces. But it is useful, nonetheless. They start with the tarring and feathering of British tax collectors in the Boston area in the 1770s culminating in the Boston Tea Party and the War of Independence. They speak to a sort of rhythm of state violence, vigorous public reaction in which the destruction of property has been common, and then official responses, which have often resulted in social change and compromise that allowed America’s modernity and prosperity, and more importantly, its democracy to evolve, if not always peacefully.

Major disturbances, sometimes about food and borders, but mostly about slavery and slave revolts, preceded and succeeded the Civil War (1861-65), but the period from its conclusion to the end of the century was especially unsettled, with more than twice as many instances as from 1800 to its start. Reconstruction in the following decade was notable for violent outbursts related to the passage of so-called Jim Crow (segregation) laws, which actually endured until 1965. Lynchings became common in the last quarter of the century and continued regularly until the Second World War.

The 1870s and 1880s, also known as the Long Depression, and book-ended by financial panics related to railroads going bust and state government defaults in 1873 and 1893, also spawned considerable social unrest. It was a period of rising economic growth, but of falling prices that brought great hardship to farmers as well as chronic conditions for the newly emerging industrial working class, which regularly fought the “haves” and bosses for better wages and working conditions, inevitably, but also among themselves for jobs and pay — white and black people and immigrant workers, such as Chinese “coolies” working on the transcontinental railroad.

Bankers and sophisticates on the East Coast were viewed with disdain. Anger fuelled the rise of the Populist Party, a left wing, anti-corporate, and mainly agrarian organisation, which emerged as a major political force in the South and the West until its demise after the 1896 election. It nominated a Democrat, William Jennings Bryan — he of “cross of gold” fame — as its presidential candidate, who lost. L. Frank Baum’s famous book, The Wizard of Oz, is a popular fantasy story, but is, at its heart, an allegory for the politics and crusade for farmers of this time.

However, the two most intense periods of civil unrest, measured by the number of serious incidents, were still to come. About 115 of the 380 recorded instances occurred in the first four decades of the 20th century, especially in the 1910s. Many of these were race riots, including the so-called Red Summer in 1919, following the Spanish flu epidemic, but a considerable number revolved around labour unrest too. While there were riots and other serious forms of unrest during the Second World War, including particularly serious instances during 1943, the post war period represented something of a hiatus before the turbulent period ushered in by the Watts riots in 1965.

About 150 or just over two-fifths of the recorded incidents of civil unrest have occurred since then, especially from 1965-1980, and again since 2010. The more recent history is readily accessible, and many of us can still recall the earlier period well, including the violent confrontations involving those protesting the Vietnam War, and striking out in favour of the “counter-culture”, women’s liberation and so on. For African-Americans though, additional themes were depressingly familiar, ranging from police treatment and or brutality, to broader discrimination, and an array of social, health, education, housing and economic issues.

It is perhaps no accident that the former period was marked by huge social change, industrial decline, and chronic stagflation and high unemployment, and by the demographic surge in young people (baby boomers) born after 1945. The last decade, moreover, has been marked by significant changes in social consciousness following the financial crisis and the decay of manufacturing towns and cities and by the surge in millennials, that is, people born between 1981 and 1996, who now outnumber the baby boomers.

Since the pandemic started, moreover, high unemployment has been a particular source of angst, and it has hit the African-American population especially as they account for a disproportionately high share of workers in the most vulnerable sectors (to both infection and unemployment), such as grocery and convenience stores, public transportation, trucking, warehouse & postal services, building and cleaning, health and social care. While labour market conditions have become terrible for most people, unemployment among African-Americans in May was 16.8 per cent, the highest for a decade, and the share of African-American people in work, measured by the employment to population ratio, stood at just under 49 per cent.

Just as in so many other cases, it just takes one incident to spark an eruption of outrage, itself an accumulation of rising levels of economic and social stress. It seems of huge significance. There is an election coming up in November, and President Trump hopes to benefit from playing the law and order card. The question is whether his already sullied reputation and the empathy of many white Americans for their African-American peers will suffice to negate it.

The most widespread protests that America has seen in a long time are a sign of both despair but also of hope. Fifty years ago, the dismantling of the legal structure of segregation had only just started. There was only a small African-American middle class. The National Advisory Commission on Civil Disorders, better known as the Kerner Commission, called out “white racism” as the foundation of “pervasive discrimination”.

It is clear that a lot of people today think that their life-experience, especially of late, hasn’t moved on much. Yet that’s only partially true. On the one hand, African Americans are much better educated today, with more than 90 per cent of 25 to 29 year-olds having completed secondary school, compared with just over half in 1968, and more than twice as likely to have a college degree. Higher educational attainment has been the biggest single contributor to absolute improvements in wages, incomes, wealth, and health since 1968.

On the other hand, the relative situation of African Americans (vis-a-vis white Americans) in these areas still lags, healthcare remains a major issue for the relatively poor to which a proportionately high share of African Americans belong, and little progress has been made in lifting their rates of home ownership, or lowering their high unemployment and incarceration rates. Police departments across the US are too numerous and varied to be pigeon-holed as one, but too many are seen, and have recently been proven to be patently hostile. Things have moved on since 1968, but self-evidently, there remains much to be done.

Last but not least, and for those of us looking on from overseas, we should be mindful of the corrosive effect that division and violence in America has for the wider world. It is a time of great danger from the pandemic, a shocking economic aftermath, and a serious breakdown in geopolitical relations between the US and the West on the one hand, and China on the other.

We need the US to heal and repair, and ultimately to pick up again at least a good part of the leadership role that Trump has abandoned. History has shown the US to have evolved through alternating long cycles of extreme violence and disruption, and extraordinary periods of progress and enlightenment. We must hope that these cycles are still at work. The alternative doesn’t bear thinking about.

Covid-19 George Floyd The US Trump