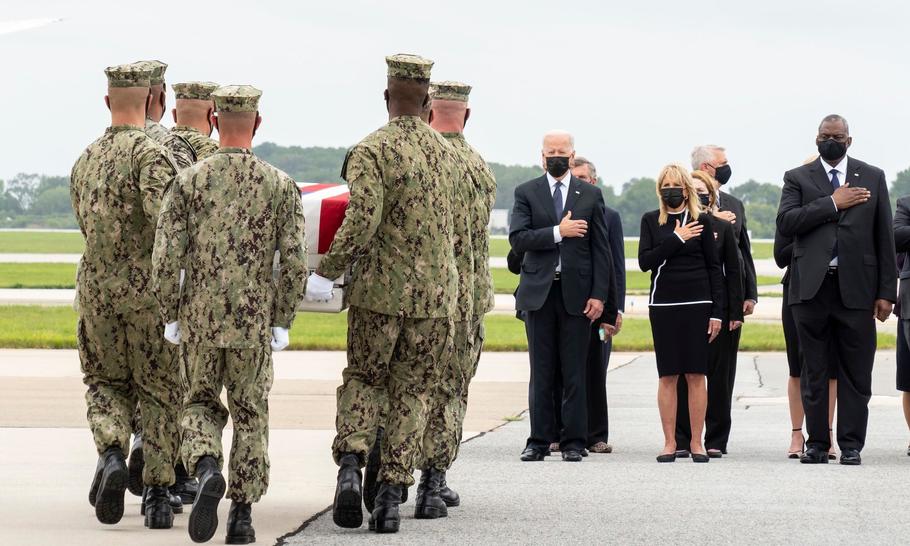 Hours after the last US plane left Kabul, marking the end of Afghanistan’s Twenty Years’ War, Joe Biden gave a televised speech to the American people. The ostensible aim was to justify his decision to leave and the manner in which it was conducted. But the President’s defiantly unapologetic apologia also contained the core of what may in future become known as the Biden Doctrine. It is this, rather than his self-justification, that repays analysis and reflection. For this insight into the thinking behind the abrupt exit from what he again called “the forever war” is loaded with significance not only for US policy, but for the future of the West.

“The fundamental obligation of a president, in my opinion, is to defend and protect America, not against threats of 2001, but against the threats of 2021 and tomorrow,” he declared. After Biden had insisted that he was not ending the war on terrorism, but merely updating the methods for prosecuting it, he turned to the other threats now facing the United States: “The world is changing. We’re engaged in serious competition with China. We’re dealing with the challenges on multiple fronts with Russia. We’re confronted with cyberattacks, and nuclear proliferation.” Biden does not see these new (or not so new) threats as an alternative to the war on terror. Insisting that “we can do both”, he argues that the war in Afghanistan was a hindrance rather than a help to fighting either. It’s unclear how this fits with the risk assessments of Western intelligence agencies, most of whom see the triumph of the Taliban as having inspired jihadis everywhere. As for Biden’s claim that he can now focus on China and Russia: that remains to be seen. The perception of an America in full retreat may even embolden the designs of Xi Jinping or Putin on their neighbours.

Nothing daunted, Biden presses on to articulate the principles underlying his foreign policy. He identifies two “paramount” mistakes of the past two decades from which lessons must learned. “First, we must set missions with clear achievable goals, not ones we’ll never reach. And second, we must stay clearly focused on the fundamental national security interests of the United States of America.”

For Biden, anything that smacks of “nation-building”, let alone spreading democracy around the world, by the use of “large-scale troop deployments” is to be avoided at all costs. This “mindset” — whether it be defined as “liberal internationalism” or “neoconservative interventionism” — is now anathema to the Biden Administration.

Biden concludes his remarks with a moving and personal tribute to the sacrifices made by US troops. “I don’t think enough people understand how much we’ve asked of the one per cent of this country who put that uniform on, willing to put their lives on the line in defence of our nation.” He mentions his son Beau, who died of natural causes after a year’s service in Iraq, and his own experience of US forces around the world over a long career in politics. And then he adds: “A lot of our veterans and their families have been through hell.” He cites “the shocking and stunning statistic” that 18 veterans commit suicide every day in America. A grim note to end on, but one that Biden knows will resonate with countless relatives of those who returned from active service with post-traumatic stress syndrome or other mental illnesses. He quotes Lincoln’s memorable phrase about the dead, who gave “their last full measure of devotion”. Yet Lincoln, like every other president before and since, took it for granted that Americans would make that ultimate sacrifice for their country. Biden is almost certainly the first to have made his foreign policy conditional on not placing servicemen and women in harm’s way, at least by implication. The message this sends to the enemies of the United States is that they only have to inflict enough casualties, physical and mental, to bring about another Saigon or Kabul.

In this sense, Biden is very much a product of his time, a typical member of the post-Vietnam generation. The military retrenchment and global activism that took place under Reagan, Clinton and the two Bushes passed him by. For him, no purpose is served by young Americans dying far from home, unless in pursuit of a narrowly defined, time-limited and clearly achievable objective that directly serves the US national interest.

What this means is that Biden has returned to the pre-1917 era of US foreign policy, before Woodrow Wilson, Franklin Roosevelt and Harry Truman sent Americans to fight and to die in Europe, the Far East and elsewhere in defence of much more broadly defined national, but also Western interests. The presidents of the 20th century saw the US as the leading power of the free world, for the sake of which they were prepared on occasion to police the seas and airspace, to create alliances and deploy forces in hundreds of bases around the globe. More recently, what became known as the Bush Doctrine (after George W. Bush) meant that the US reserved the right to act unilaterally and if necessary pre-emptively against its enemies: with or without allies, with or without UN authorisation. That doctrine was later expanded in President Bush’s Second Inaugural Address of 2004 to include the promotion of liberty and democracy in the name of security: “So it is the policy of the United States to seek and support the growth of democratic movements and institutions in every nation and culture, with the ultimate goal of ending tyranny in our world.”

That goal has now, in effect, been renounced by Biden. There is no indication that his administration stands ready to echo Bush when he told “all who live in tyranny and hopelessness” that “the United States will not ignore your oppression, or excuse your oppressors”. Bush told these dissidents and reformers around the world: “When you stand for your liberty, we will stand with you.” Neither Donald Trump nor Joe Biden could possibly have uttered these words. That tawdry old slogan “America First”, revived by Trump and now adopted by Biden, is the antithesis of such a universal perspective of America’s manifest destiny. The Biden Doctrine is the result of the long march through the institutions of a disillusioned generation. The defence of the West or the free world plays no part in this doctrine, except insofar as these concepts serve the geographically and temporally limited interests of the United States.

It is time that America’s allies, from Tallinn and Tbilisi to Tokyo and Taiwan, woke up to what has happened. Here in London, Boris Johnson and his colleagues must engage urgently with their counterparts in Washington to ascertain what is, and is not, now defined as part of the US national interest. The rising powers of India, Latin America and Africa should be enlisted to join the coalition of the willing against tyranny. Dark days may lie ahead, but we cannot let our American ally abandon its mission of more than a century so easily. War weariness is an understandable emotion. Isolationism would be a catastrophic miscalculation.