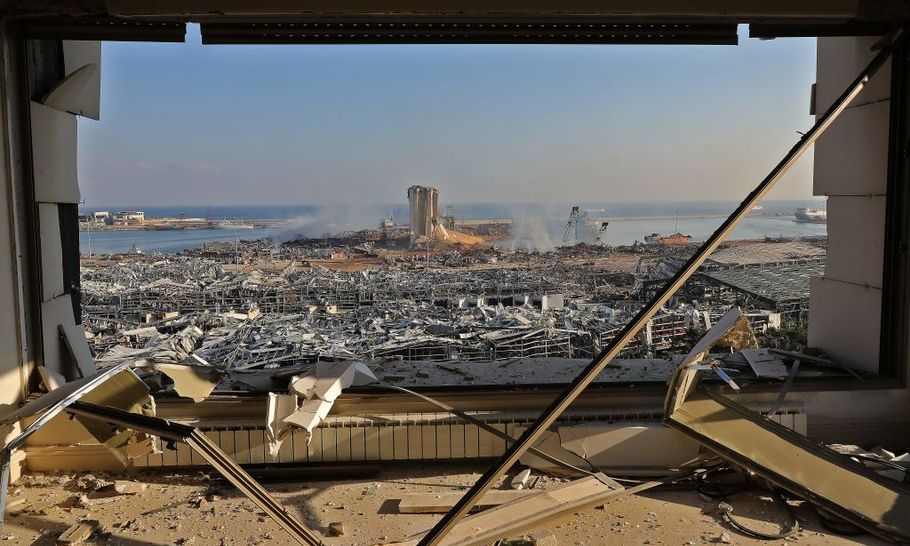 The calamity that befell Beirut on Tuesday was almost biblical in suddenness and scale. Two explosions, the second loud enough to be heard hundreds of miles away, devastated one of the greatest ports in the Levant. The toxic mushroom cloud that followed will have added an additional hazard to the thousands of injuries. At least four hospitals were severely damaged; the others lost electricity. Poor Lebanon: a divided country, still recovering from civil war and in the throes of a seemingly endless economic malaise, has now been laid low by a catastrophe that could bring chaos in its wake.

The initial reaction of the authorities was unpromising. Hospitals were reported to be overwhelmed and the power cuts that afflict Beirut at the best of times may now cost lives. President Michel Aoun threatened severe punishments against those found to be guilty, but he offered no apology or explanation for the presence of a warehouse full of ammonium nitrate — traditionally known as saltpetre, the main ingredient of gunpowder. The responsibility for allowing huge quantities of this notoriously combustible chemical to be stored near the centre of the capital for several years lies squarely with the Lebanese government.

The most likely explanation is official corruption, which is endemic in this dysfunctional state. Few capitals have a greater gap between rich and poor than Beirut: the former are above the law and the latter at their mercy. The assassination of Prime Minister Hariri in 2005, which took place near the epicentre of Tuesday’s blast, has never been satisfactorily solved, though verdicts on four accused are due this Friday. Foul play in this case, too, cannot yet be ruled out: President Trump claims that his generals told him that “some kind of bomb” must have been involved. We may not know for some time, because the blast is likely to have vapourised any evidence at the scene.

The deeper, more urgent question for the people of Lebanon is: how much longer can they tolerate the presence of up to 50,000 heavily armed Hezbollah fighters in their midst? Proscribed by the US and the UK as a terrorist organisation, Hezbollah likes to present itself as “the resistance” to potential Israeli aggression. Over the past 35 years, however, it has grown into a state within a state. Though its leader Hassan Nasrallah boasts of the movement’s welfare and religious roles as well as its military functions, all three are largely financed and controlled by a foreign power: Iran.

For the Supreme Leader Ali Khamenei and his satrap Nasrallah, Lebanese lives are expendable. Why else would Hezbollah station as many as 100,000 missiles in and around the population centres of Beirut? The fact that the government dares not force them to disarm demonstrates its weakness on a daily basis. The world now knows that Beirut was literally a powder keg. But the even greater disaster that is waiting to happen there concerns the use of more than two million civilians as human shields by Hezbollah.

The world cannot stand by while Lebanon deals with the aftermath. The loss of its main port means that the country will quickly run short of food and other essentials. Britain can and should offer to airlift medical supplies and aid via the RAF base in nearby Cyprus. The US and the EU will doubtless contribute to emergency relief. Though it has no formal diplomatic relations with Lebanon, Israel has offered to treat victims at its world-class hospitals just a few miles across the border. It will be interesting to see whether the government of Prime Minister Hassan Diab accepts the Israeli offer — and whether other regional powers such as Turkey, Saudi Arabia and, above all, Iran are ready and willing to deliver not merely sympathy but real assistance.

This bolt from the blue has highlighted the fact that Lebanon is unable to protect its citizens. The conspiracy theories that invariably circulate in the Middle East after events of this kind will lay the blame everywhere except where it belongs: with the self-aggrandising leaders of Lebanon and the sinister interlopers of Iran. The blast in Beirut poses an existential question: is Lebanon a failed state?