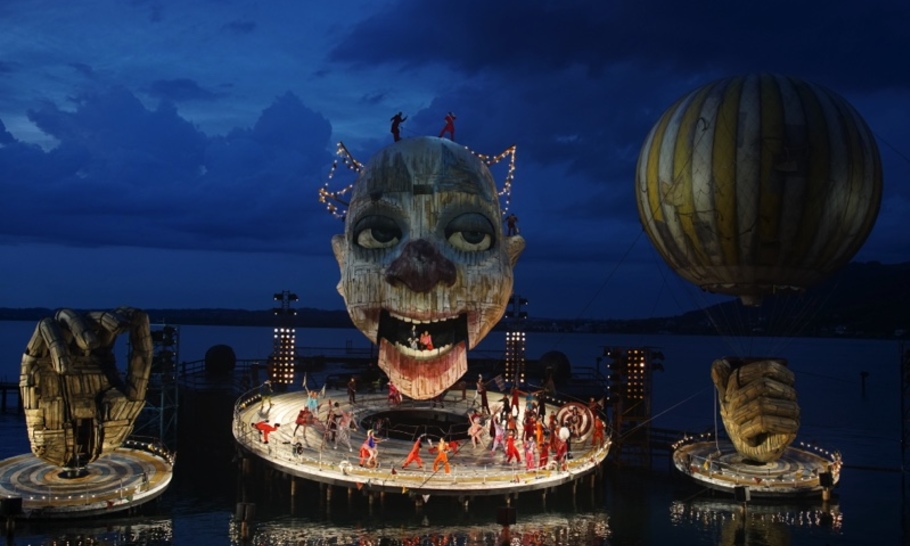 Every summer the Austrian town of Bregenz on Lake Konstanz hosts an opera and concert festival. The lake stage is home to a vast open-air production, half surrounded by a modern amphitheatre seating seven thousand, the rest is in the Festival Theatre. The massive construction of the lake stage starts nearly a year ahead, remaining in place for two summers, and this was the first for Verdi’s Rigoletto, with Massenet’s final opera Don Quichotte in the theatre.

On the lake, director Philipp Stölzl had engineered a huge moving head for the jester plus two enormous hands with movable fingers, one holding a giant balloon. Rigoletto is a middle period Verdi opera where the court jester connives with his master the Duke in procuring ladies and hoodwinking their husbands or fathers, but when it concerns the jester’s own daughter his revenge misfires. The dead body that the assassin delivers in a sack is the girl herself, and in a final duet with her father Rigoletto she promises to join her mother in heaven and pray for him there. While her lifeless body lies on stage a double ascends to the heavens in the balloon, a very effective ending to an otherwise over the top staging where performers and acrobats, some dressed as monkeys, appear all over the place: inside and on top of the giant head, climbing into precarious positions and clambering from hands to face.

Kathi Maurer’s excessively colourful and outrageous costumes helped emphasise the youthful hi-jinks at the Duke’s court, and English pantomime lovers would have found plenty of opportunities to call out “behind you!” before someone was tipped into the lake. But if it all seemed too much, the music was wonderful, dynamically conducted by Enrique Mazzola with Bulgarian baritone Vladimir Stoyanov outstanding in the title role. Lovely singing from French soprano Mélissa Petit as Gilda, even on trapezes and hanging half-out of the balloon, and Stephen Costello as a strongly sung Duke defied any sense of vertigo by clambering around the giant head and lying in a hammock suspended 30 metres above the main stage. How they coped I have no idea, but I felt exhausted just watching this hyperactive production!

No such problem with the hugely moving Don Quichotte in the Festival Theatre. Massenet’s final opera is a well-constructed drama based on a play by Jean Le Lorraine, in turn based on Cervantes. Dulcinée is pursued by five gallants, and when the Don arrives protesting undying devotion, she suggests he can prove it by recovering her necklace, stolen by bandits the day before. In the third act of five he and the loyal Sancho Panza confront the bandits, a gang in a run-down neighbourhood in Mariam Clément’s eclectic production, recovering the necklace through the Don’s conviction that he is here to do good and treat all men with respect. Ms Clément’s production takes a view of the need for masculinity to be respected, and in his encounter with the gang our hero is a crusader for justice dressed as Spiderman. Bloodied but unbowed he leaves them to ponder the goodness in their lives.

When he returns to give Dulcinée the necklace she is now a manager with her own office, but laughingly rejects his proposal of marriage, though she immediately regrets her insincerity. As the staff make fun of him, Sancho Panza rips into their insufferable mockery and takes his master away. In the brief fifth act the two of them are alone, away from the trite world of the everyday, and as the Don realises death is on its way he stretches his arms towards the stars. Dulcinée then steps from stage to auditorium and out through the back, her voice calling from the distance le temps d’amour a fui (the time for love is past).

Suddenly we are left to contemplate what modern life is doing to men, to women, to love itself in the pure realm inhabited by the Don, and as Dulcinée herself says in Act 4 when her associates mock him, Oui, peut-etre est-il fou, mais c’est un fou sublime! (Yes, perhaps he’s mad, but it’s a sublime madness). A lesson here for us all. After seeing each of the five acts in a different setting, starting with the Spain of the past on a stage within a stage, where audience members argue with one another but eventually take their seats to watch the play, we find at the end a stage within a stage within a stage, and as Sancho Panza weeps over the Don’s dead body the music draws to a close and three stage curtains close one behind another.