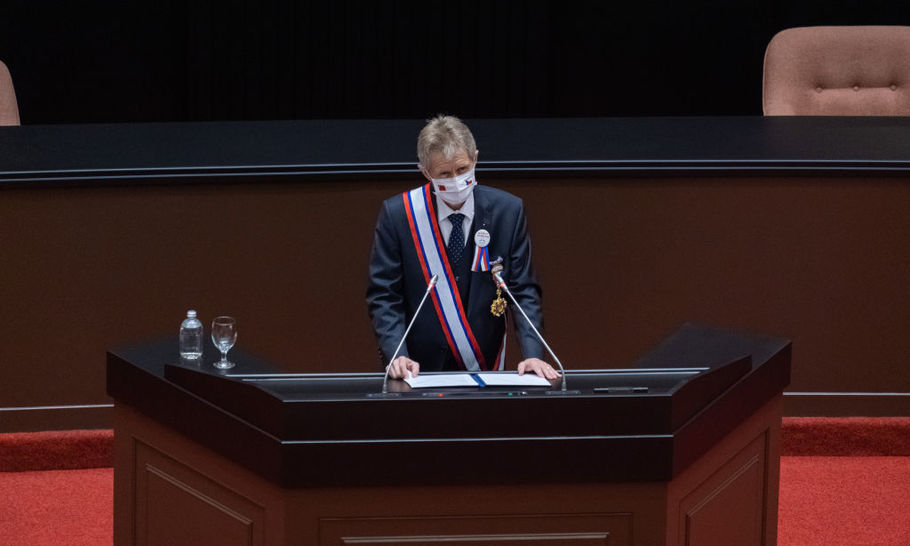 Has invertebrate Europe found its backbone at last? This week, a blazing row erupted between Germany and China over the visit to Taiwan of Milos Vystrcil (pictured above), the Speaker of the Czech Senate. The Chinese Foreign Minister Wang Yi, who was himself on a trade mission to Germany, threatened to “make [Vystrcil] pay a heavy price for his short-sighted behaviour and political opportunism”. Now Wang’s German counterpart, Heiko Maas, has supported the Czechs, with a blistering attack on Beijing’s human rights record. He warned his Chinese guest: “Threats have no place here.”

It is difficult to recall such an open diplomatic clash between the EU and China, which are one another’s biggest trading partner. An official visit to Taiwan was bound to rile the Chinese, especially given their tactic of “wolf diplomacy”. Beijing has sworn to cut off relations with any country that maintains diplomatic ties with Taiwan.

What has given this row additional vehemence, however, has been Vystrcil’s allusion to one of John F. Kennedy’s famous speeches. Speaking before the parliament in Taipei, the Czech senator recalled the time in 1963, at the height of the Cold War, when Kennedy rallied the isolated people of West Berlin by declaring: “Ich bin ein Berliner.” Vystrcil then added: “I am Taiwanese.” Just to make sure that he was understood in Beijing, he repeated the words in Mandarin, adding for good measure: “I wish you an independent, true and just future. It is in your hands.”

It is no accident that the first official recognition of Taiwan by a senior European politician for many years has come from the Czech Republic. After 40 years of Communist dictatorship, including the Soviet invasion of 1968, the Czechs rose up in the 1989 Velvet Revolution under Vaclav Havel. Despite Chinese ire, Havel made a point of befriending the Dalai Lama. Referring both to his own country’s past and to Taiwan today, Vystrcil emphasised that democrats have a duty to support those “who find themselves building democracy under difficult conditions”. The Speaker of the Czech Senate is the first European statesman to address Taiwan’s parliament for nearly 50 years.

The Czechs have also not forgotten how they were betrayed by Britain and France in 1938, when Neville Chamberlain sought to appease Hitler at Munich. In his speech, Vystrcil quoted Winston Churchill’s celebrated denunciation of appeasement in the House of Commons: “You were given the choice between war and dishonour. You chose dishonour, and you will have war.” The Taiwanese gave their Czech guest a standing ovation.

This reminder of the most traumatic period in modern Czech history evidently also struck a chord with the German Foreign Minister. Heiko Maas put his remarks to Wang Yi in the context of Europe’s determination to “represent its interests more confidently”. He confronted the Chinese Foreign Minister with the persecution of the Uighur minority in Xinjiang, the crushing of freedom in Hong Kong, and concerns about Huawei, the technology giant accused of acting as an arm of the Chinese state.

Whereas China can punish the Czechs without serious consequences, the Germans are among China’s most important economic partners. Any rift between Beijing and Berlin is bound to have repercussions for both sides. Hitherto, when other European leaders have stood up to Chinese bullying — as Boris Johnson has done over Hong Kong — German politicians have been wary of putting their heads above the parapet.

This time, however, the German government evidently sees the need to offer the EU some leadership. The fact that a Czech parliamentarian sees Communist China playing the same role vis à vis Taiwan as Nazi Germany did towards prewar Czechoslovakia is not lost on Maas. It would be unforgivable for him to remain silent while the Chinese Foreign Minister, speaking on German soil, threatens a fellow European.

Are Vystrcil’s historical comparisons fair? The parallels between his own visit to Taiwan and Kennedy’s to Berlin in 1963 are striking, especially as the Cold War has never ended for the Taiwanese. Indeed, the very existence of Taiwan as a de facto independent country is a result of the refusal of the United States to recognise Communist China until 1979. For three decades after the Communist Party’s victory in the Chinese civil war and Mao Zedong’s establishment of the People’s Republic of China, the US held out against recognition. Kennedy was particularly hostile to diplomatic relations with Beijing, because he saw China as more dangerous even than the Soviet Union. The Kuomintang regime in Taiwan held China’s seat on the UN Security Council and, as it was a usually reliable American ally, successive presidents maintained the status quo. Only after Nixon’s famous visit to China broke the ice was Taiwan pushed into diplomatic isolation.

What about Vystrcil’s allusion to Munich and appeasement? It will have infuriated Xi Jinping to be implicitly compared to Hitler, which may explain why Wang reacted so aggressively during a diplomatic visit that was intended to smooth over differences with the EU rather than exacerbate them. But Xi himself has repeatedly warned the world that the People’s Republic will regain control over Taiwan by 2050, if necessary by force. There is an obvious similarity between the One China policy and Hitler’s demands for the return of German-speaking regions, such as the Sudetenland, in the 1930s. At that time, Czechoslovakia was the only true democracy in Central Europe. Within months of the Anglo-French betrayal of the Czechs at Munich, the Germans marched into Prague, confident that they could do so with impunity. The question now posed by Vystrcil’s historical parallel is: in the event of a Chinese invasion, is the West any more likely to come to the aid of Taiwan than it did in the case of Czechoslovakia?

What the present dispute between China and Europe undoubtedly shows is that history matters in politics and diplomacy. After decades of turning a blind eye to the appalling behaviour of the Chinese Communist regime towards its own people and, increasingly, its bullying of its neighbours and even Western nations, Germany is putting principles before profit. At last, the European worm seems to be turning.