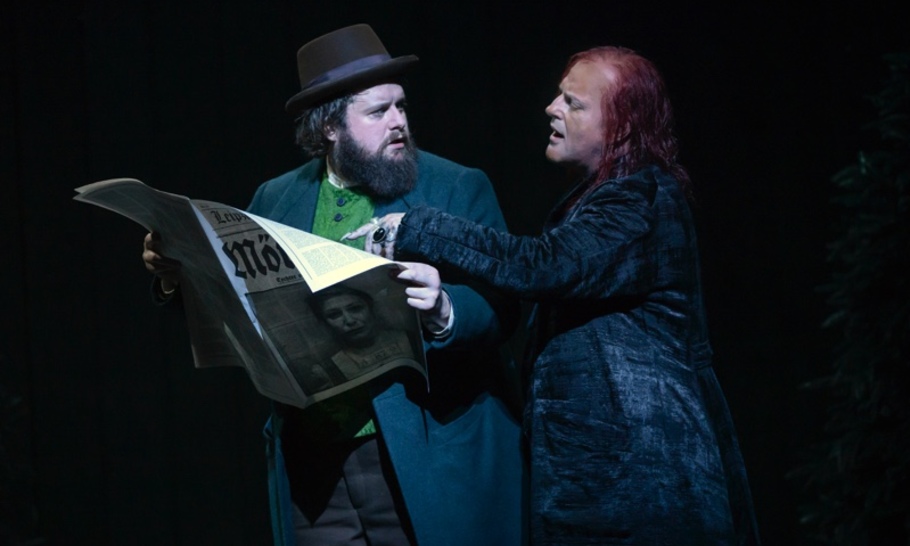 Méphistophélès on the right, plus Faust holding a newspaper with a picture of Marguerite © Glyndebourne Productions Ltd. Photo: Richard Hubert Smith.

In the usual version of Berlioz’s Damnation of Faust, Marguerite is redeemed at the end. Her only fault was to love and the heavenly spirits transport her to paradise. In the new production at Glyndebourne, the director, Richard Jones, changes this. After the stage plunges into blackness at the end, the lighting slowly returns and Christopher Purves as Méphistophélès comes forward to introduce demons from hell, who dance for all they are worth to an orchestral interlude extracted from the opera. A staging where the devil gets the last laugh.

On the opening night of the season after this unexpected encore, splendid fireworks marking the 25th anniversary of the current Glyndebourne opera house opened up over the main lawn, with an orange full moon shining through from behind. This magical ending to the evening helped to remove the impression of a production that didn’t quite work.

Berlioz’s take on the Faust story is as much secular oratorio as it is opera, and can be theatrically static without some well choreographed action. But Jones’s choreography was itself strangely static: stylised movement, freezes, stationary military cadets gawping into Marguerite’s house. The only robust action was the dance sequence of the finale.

Towards the end of the second of the four parts of this work, when Faust is transported into a dream state, the tarts surrounding him move lazily, entirely without the allure expressed in the music. This is symptomatic of a staging that conveys a stark coldness about any aspect of sexual gratification or passion. Thus, when Faust and Marguerite express their love for one another, they stand at opposite ends of a kitchen table, while he simply turns away. As a director, Richard Jones always expresses original ideas, which sometimes turn up trumps. In this case they produce only an interesting mixture of low value cards in the minor suits.

Excellent singing though, supported by the music director Robin Ticciati’s exemplary conducting of the London Philharmonic. The star of the evening was undoubtedly a thoroughly Méphistophélian Christopher Purves. A memorable Saul at Glyndebourne four years ago, Purves completely held the stage, from his initial spoken introduction to his final presentation of the diabolic ballet at the end, his French diction wonderfully expressive, his vocal warmth subtle and seductive. As his willing dupe Faust, Allan Clayton sang a plaintive but robust tenor, though the staging rendered him more as unworldly PhD teaching assistant than world-weary intellectual. The young French-Canadian mezzo Julie Boulianne made a vocally outstanding Marguerite in her Glyndebourne début, when at last she had the opportunity to express her feelings towards the end, and Ashley Riches sang a strong Brander in the earlier visit to Auerbach’s Keller with his song of the Rat. The irreverent fugal Amen that follows it was brilliantly sung by the chorus, but awkwardly staged as a freeze, followed by an odd staging of Méphistophélès’ Song of the Flea, where Faust helps him play the three-shell game, collecting the punters’ money in his shabby backpack. This come-down from his earlier role in academia is a mere way-station in his degeneration; he later stabs one of the cadets.

Berlioz does not redeem Faust, Richard Jones declines to redeem Marguerite, and even the final dance of the demonic spirits does not redeem this darkly unromantic production.