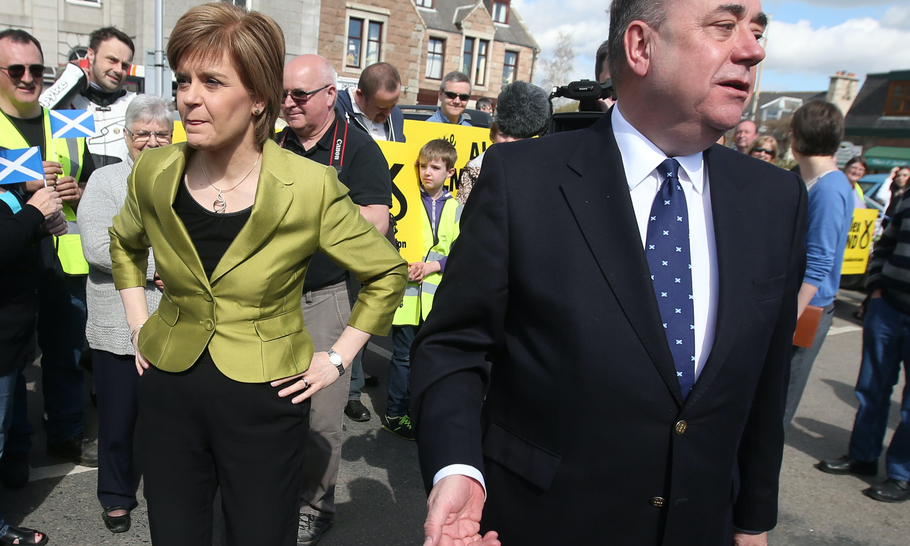 In normal times there is no competition in the drama stakes between Westminster and Holyrood. With its confrontational history and geography, the mother of Parliaments provides a far more exciting spectacle than the Continental-style consensus of her younger Scottish rival. But these are not normal times. The weekly knockabout over Covid between Boris Johnson and Sir Keir Starmer cannot disguise the fact that, on the great issue of the day, there is little of substance that divides Government and Opposition.

In Edinburgh, however, MSPs can scarcely breathe amidst the sulphurous fumes of internecine warfare. No blood feud among Highland clans could match the mutual loathing of the two camps within the ruling party. Never have Nationalists fallen out with one another over independence as bitterly as now. Alex Salmond and Nicola Sturgeon, the two personalities who have dominated Scottish politics for a decade, are now tearing one another apart. As their rivalry descends from duel to dogfight, its heady mixture of sex scandal and skulduggery has held ordinary Scots spellbound.

This week the clan warfare seems to be reaching a climax. As First Minister and party CEO respectively, Nicola Sturgeon and her husband Peter Murrell run the SNP like a family business. But when they invited her predecessor — the man to whom she owes her career — to their home in April 2018 for an informal and unminuted meeting about allegations of sexual abuse against him during his time in office, the couple made a possibly fatal mistake. Ms Sturgeon later claimed that this meeting was the first time she heard about the allegations and that she had “forgotten” about an earlier one in March with Salmond’s chief of staff. She has been accused by Ruth Davidson, her Tory opponent, of a cover-up, as Holyrood seeks to establish the precise chronology and details of events that led to Salmond’s trial on 13 counts of sexual assault. He was acquitted of all criminal charges and in a civil case was awarded more than £500,000 in damages. Though his conduct as revealed in court was seedy and unedifying, to say the least, in law Salmond is innocent man. He has had justice, but he now wants vengeance.

Salmond claims that Ms Sturgeon has misled the Holyrood Parliament, broken the ministerial code by casting doubt on the jury’s verdict and — most sensationally — that she and her husband conspired to destroy him by encouraging women to accuse him of assault. The First Minister vigorously denies all these allegations. But she has lost control of the process, which now has a momentum of its own.

The allegations are contained in a dossier about the affair submitted by Salmond himself in evidence to an investigating parliamentary committee. Much of this evidence has been redacted on the orders of the Crown Office, Scotland’s equivalent of the CPS. This act of censorship, denying the Scottish Parliament evidence that Salmond claims is crucial, has caused almost as much indignation as the affair itself. As a former Supreme Court justice, Lord Hope of Craig puts it, “That could not happen at Westminster.”

Today the drama will reach a climax when Salmond is grilled by the committee. He has already had his day in court — quite a few of them, in fact — but this is the first time he has had a chance to set out his case against his successor. Though Ms Sturgeon’s former mentor will be fiercely cross-examined by her supporters, both MSPs and the public too will have to decide whether Salmond’s story adds up.

The First Minister is fighting for her political life. Yesterday she defended the intervention of the Crown Office and, in a fiery peroration, rounded on her critics: “What is not legitimate is to pursue a conspiracy theory, a scorched earth policy that threatens the reputation and integrity of Scotland’s independent justice institutions, just because you happen to dislike this government, and to sacrifice all of that on the altar of the ego of one man.”

By reminding Scots of their independent institutions and legal system, Ms Sturgeon is seeking to move the agenda on. She hopes rally support for her plan to press ahead with an “advisory” referendum on independence soon after the parliamentary elections in May. Salmond’s faction in the SNP opposes this policy of defying Westminster as too risky and unnecessary.

By mentioning “the ego of one man”, she also reminds voters of another important political dividing line: the “gender war”. Younger Scots especially back her promise of enshrining trans rights in the Gender Recognition Act, but this issue has pitted her against senior colleagues — not only male, but female too. Joanna Cherry, one of the SNP’s few stars in Westminster and the QC who successfully challenged Boris Johnson’s prorogation of Parliament in the Supreme Court, has been sacked as home affairs spokesperson by Ian Blackford, the party’s leader in the UK Parliament. Blackford is a close ally of Ms Sturgeon and the humiliation of Ms Cherry is seen as punishment for her “transphobia”. As a lesbian and a traditional feminist, she opposes the provisions of an Act that would make it much easier for teenagers to switch gender identity. As Graham Stewart writes in The Critic, “Scottish separatism advances under the creeping barrage that it is progressive.” But a policy that prioritises sexual as well as national identity politics is not to the taste of all the Scots who consider themselves social liberals — let alone those who are social conservatives.

Under Salmond and Sturgeon, the Scottish National Party has routed its rivals and come close to turning Scotland into a one-party state. So far their feud has yet to destroy their party’s popularity. But if the sorcerer and his apprentice continue to savage one another in public, they will wreck the SNP. The seemingly unstoppable cause of Scottish independence could yet come unstuck on the altar of the ego of one man — and one woman, too.