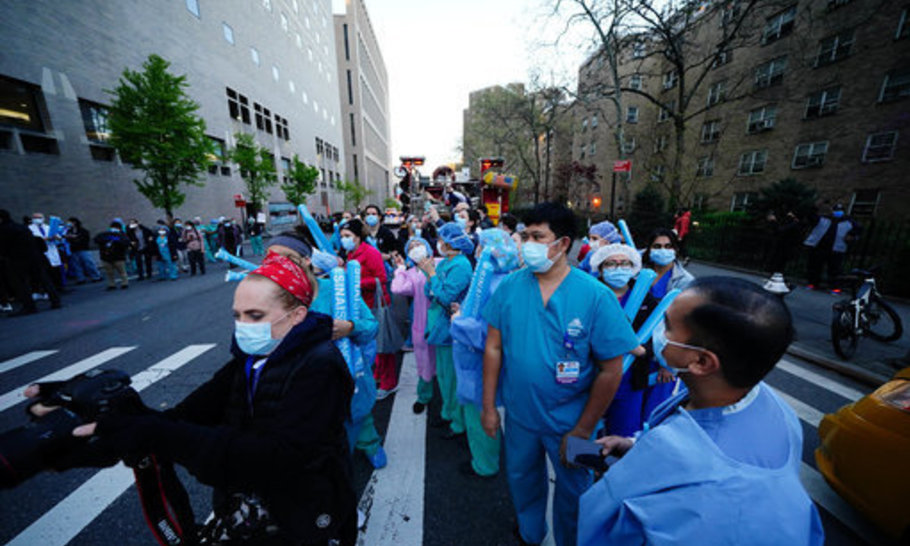 A small group of Sarajevo residents were going about their day on June 28, 1914, when they saw a man come out of a shop, raise a pistol, and assassinate Archduke Ferdinand as he sat in the back of his car. On the morning of September 1, 1939, the German battleship Schleswig-Holstein fired its guns at the Polish Military Transit Depot on the Westerplatte peninsula, beginning the first battle of World War Two. On the morning on September 11, 2001, the Naudet brothers, a pair of French documentary filmmakers, was following firefighters on a routine call of a gas leak when they looked up and saw a passenger airplane crash into one of the towers of the World Trade Center.

These are the sorts of moments where people who just happened to be in the wrong place at the wrong time caught a glimpse of the course of history changing, suddenly and dramatically for the worse. Right now, all of us are experiencing our own version of that ominous moment of witnessing history.

The threat of the SARS-CoV-2, the virus strain that causes Covid-19, is the most serious threat to the world since the Cuban Missile Crisis, the World Wars or perhaps the 1918 influenza pandemic. We have lived through terrible wars, terrorist attacks, and natural disasters. But only a handful of the most aged of us have experienced anything close to this, the kind of crisis that manifests in Chinese cities, Italian villages, Washington suburbs, London neighborhoods, Indian slums and almost every community in the world simultaneously. Some places are hit much worse than others, but no place on earth is immune. Daufuskie Island in South Carolina, accessible only by ferry and with only 445 residents, has a case of coronavirus.

By now the whole “it’s comparable to the flu” argument should be fully dispelled in your mind. Even a bad flu season doesn’t require hospitals to rent refrigerated trailers for storage of bodies. No flu season overwhelms hospitals in northern Italy and forces most of the world onto lockdown. The flu almost never kills men in their early 50s after three days of “mild symptoms.”

The argument that almost all of the world’s governments are overreacting like a bunch of Chicken Littles to a virus that is comparable to the flu is a vivid demonstration of “normalcy bias” — the idea that because today was pretty much like yesterday, tomorrow is certain to be pretty much like today. We don’t like to think that terrible things could happen to us or our loved ones. We don’t like to think about the possibility of a supervolcano erupting in Yellowstone Park, an electromagnetic pulse attack knocking out the power all over North America, an accidental launch of a nuclear missile or an alien invasion — and thankfully, those doomsday scenarios are extremely unlikely.

But it turns out a dangerous viral pandemic isn’t so unlikely.

In the United States, we grew particularly immune to dire warnings about viral outbreaks in faraway lands as the 21stCentury progressed. Very few Americans even remember the SARS outbreak in 2002-2003, because while it was going on, the U.S. was debating and launching the invasion of Iraq. The Middle East Respiratory Syndrome — another kind of coronavirus — in 2012 barely touched the United States, with just two cases and no deaths. The Western African Ebola virus outbreak that started in 2013 did garner considerable public attention, but for all of the public fear, the US had only four cases and one death. The 2009 H1N1, a.k.a. “swine flu” hit Americans the hardest, but even that virus put about one-tenth of one percent of Americans in hospital. About one in five Americans caught it and probably thought it was just the regular flu.

Americans in particular got used to dire warnings amounting to nothing much, or at least nothing that affected their daily lives.

This is the big one. This virus is something new, and much more dangerous, and still not understood in many ways: how long do those who fight off the virus keep antibodies? Which drugs and treatments work? How many are asymptomatic and unaware? Why do some people experience extremely mild symptoms, while other succumb so quickly?

I could quote the counts of cases and deaths worldwide at the moment of writing, but by the time you read this, they would be significantly higher. We are thankfully not in the societal-collapse scenarios out of apocalyptic fiction like The Stand or The Book of M. But this is going to be bad, the hardest hard time that most of us have ever seen. We are probably in for something out of Steven Soderburgh’s film Contagion or “the other side” in the television series Counterpart — a lasting crisis with long-lasting economic, social, medical and psychological aftershocks.

Maybe tomorrow some genius in a laboratory will have a “eureka!” moment and discover a vaccine or a cure. But barring something miraculous, life is not getting back to normal anytime soon. We’re going to be learning to live with social distancing, on-and-off quarantining, wearing masks in public and keeping our distance from the elderly and immunocompromised for a long while. We can and will get through this, but we need to be prepared for this to be a long, hard slog.

These are daunting thoughts — but similarly daunting thoughts probably ran through the minds of the Sarajevo pedestrians, the Polish troops in Westerplatte, and the New York firefighters as they realised how the world was changing before their eyes. Sometimes history throws its worst at you, and survival counts as a major victory.