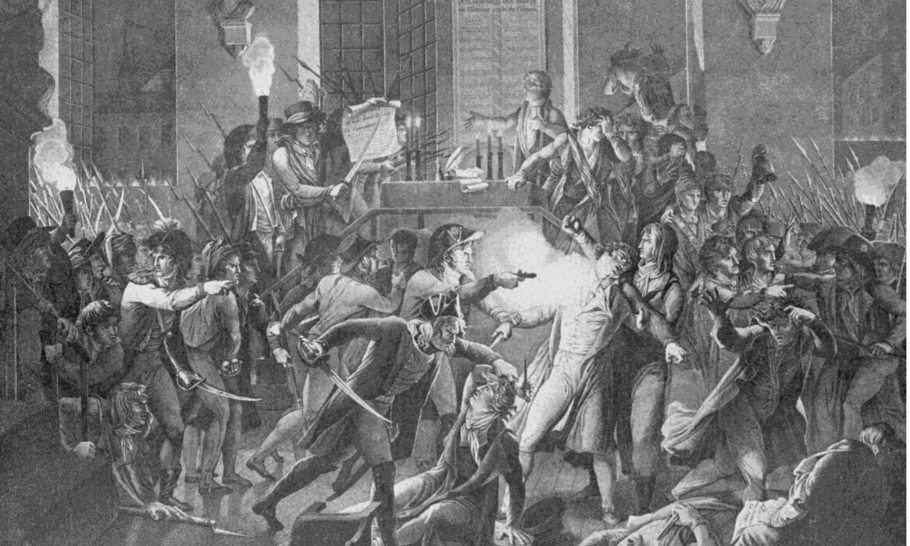 Peaceful development is good for the citizens but bad for historians because it is rather dull. Obviously, it is more interesting to write about a juicy revolution than about everyday life of everyday people. If there were no major changes in the affairs of men there would be no need for historians. One historian went so far as to claim that the end of the Cold War spelt the end of conflict, the end of history. He was wrong.

Let me enumerate a few of the common features;

Next, let us see a few parallels: institutions and people who played similar roles in the two revolutions.

The two lists above shows the basic relationships, but a few of them need further discussion:

Storming. There is no doubt that the Bastille was stormed. The main evidence for storming the Winter Palace comes from Eisenstein’s film produced 10 years later. It has been said, since the collapse of the Soviet Union, that more people died in making the film than  on the actual day, in action. Also, the only eyewitness account we have (that of John Reed’s Ten Days that Shook the World, banned in the Soviet Union) mentions no storming, only some sneaking in at an open back entrance.

Thermidor is a month in the French revolutionary calendar. The 9th of the month is well known. On that day Robespierre, with two of his lieutenants, was sent to the guillotine, signalling the end of Terror. Since then historians mean by Thermidor the time when moderates took over the government. In the Soviet context, one might call the so-called New Economic Policy of 1921 as thermidorian because it was a sharp reversal of policy, allowing a certain measure of private enterprise. Alternatively, one could maintain that Thermidor in the Soviet Union came only after the defeat of the anti-Gorbachev coup in 1991.

Devouring children. The original quotation is from Vergniaud who said that “La revolution, comme Saturn, devore ses infants.” A sample of those devoured are Brissot, Danton, Desmoulins (both man and wife), Hebert, Robespierre, Ronsin, Vergniaud and Vincent in France, and Antonov-Ovseyenko, Bukharin, Kamenev, Piatakov, Radek, Rykov, Sokolnikov, Tukhachevskii and Zinoviev in the Soviet Union.

Finish with one man at the top. It happened in both countries. In France it was Napoleon Bonaparte, after his coup d’etat of the 18 Brumaire. Stalin had no coup d’etat. He did not need one. His grip on power was gradually tightened, starting with the job of Secretary of the Bolshevik Party. He was given the most boring job and he did it with enthusiasm. One might argue that he reached perfect control by the end of the 17th Congress of the Bolshevik Party in 1934. When the leadership was elected Kirov happened to receive more votes than Stalin. That sealed Kirov’s fate. In addition, of the 1966 members of the Congress, 1108 were sent to the Gulag, as Nikita Khruschev revealed in his report to the 20th Congress in 1956. Nobody knows how many people were liquidated during Stalin’s rule. Estimates vary from five million to 20 million.

What made possible such disregard of human life? There was a new ethics, best described by Rubashev’s Diary in Koestler’s novel, Darkness at Noon:

“We were the first to replace the nineteenth century’s liberal ethics of ‘fair play’ by the revolutionary ethics of the twentieth century. In that we were right. A revolution conducted according to the rules of cricket is an absurdity. Politics can be relatively fair in the breathing spaces of history: at its critical turning points there is no other rule possible, than the old one: the end justifies the means.”

Napoleon ruled on his own, conquered umpteen countries, but there the comparison with Stalin stops. In England he was known somewhat derogatively as Boney; that is not surprising, considering that Britain was his main adversary, ultimately his nemesis. He fared much better on the Continent, even among the people he conquered. In the French satellite, the Duchy of Warsaw, he introduced a new legal system that liberated the serfs and made everybody equal before the law.

His score on judicial assassination is much better than Stalin’s. He was responsible for one single execution, that of the Duke of Enghien. He also brought a degree of freedom to the people of the Rhineland. See the very emotional poem celebrating the Emperor by Heinrich Heine, a Rhinelander, entitled “Zwei Grenadiere” (“Two Grenadiers”). These are the last two lines:

(I shall then rise from my grave fully armed, the Emperor to protect.)

Heine was not an exception. Goethe and Napoleon are known to have mutually admired each other. True, Stalin also met stars of the Soviet literary establishment. Some (like Ilya Ehrenburg) survived; others (like Isaac Babel), did not.