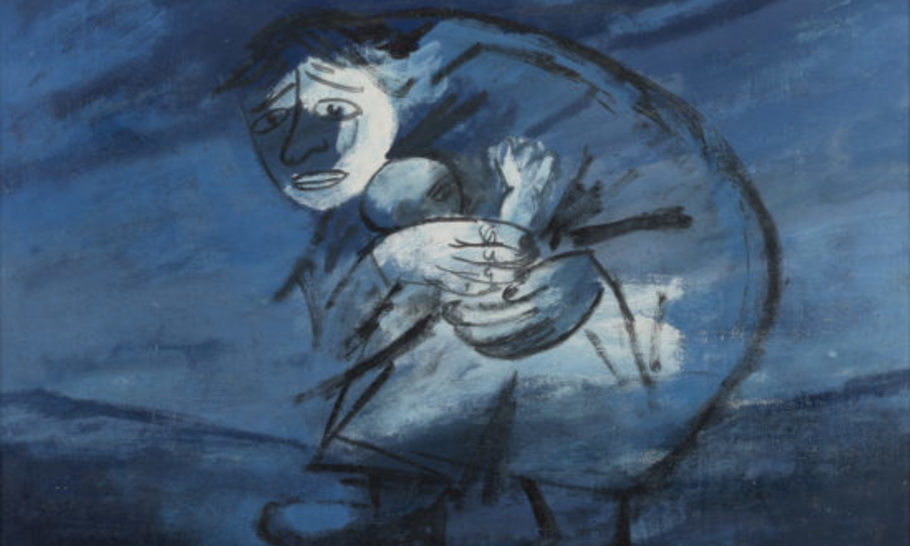 Mother and Child Fleeing 1942, The Estate of Josef Herman Courtesy of Flowers Gallery

On Friday an exhibition of paintings by the Polish refugee artist, Josef Herman opened at the Flowers Gallery in Hoxton, London. The title, “Journey”, is appropriate. He spent years on the move, fleeing from persecution. He also went on a very different kind of journey, finding a new voice as an artist.

My father, Josef Herman, was born in 1911 in a poor working-class community in Warsaw. His family were Jews and he left in 1938, to escape from rising anti-Semitism. He never saw any of his family again. “I am sure they did not hear my last good-bye,” he writes of the farewell scene at the station. “I did not hear theirs.” He moved first to Brussels, then France, and after the German invasion, to Britain in 1940.

What is striking about the early works in the new exhibition at the Flowers Gallery is the subject matter. Herman painted Jews. In Glasgow, during the early war years, he created a series of elegiac images of Jews from his childhood in Poland: klezmer musicians, rabbis, storytellers and workmen. In these works, he reimagined the lost world of his childhood, a world that was being destroyed as he was trying to recreate it. His biographer, Monica Bohm-Duchen, wrote, “there is nothing remotely like them in the history of art in Britain.”

Perhaps the greatest change in his work came when he moved to Ystradgynlais, a mining village in South Wales, in 1943. He stayed there for more than ten years. He moved from painting Jews to painting Welsh miners and other working people: peasants, fishermen, farm labourers. It was as if the world of his childhood, now destroyed during the Holocaust, had become an impossible subject. Instead, he painted a more universal subject: working men and women.

Not only did he find a new subject, he also found a completely different artistic style. Instead of evocative pen and ink drawings, he moved to rich oils and pastels, glowing sunsets, copper and golden skies, great monumental figures set against a bare landscape.

This change is caught in one extraordinary moment on 1 October 1948. He wrote in his journal, “Took out for burning some pictures and stacks of drawings: a curious delight. I know exactly how I got on to this Chagallic trick but it has no longer any interest for me.”

This new lyricism and subject matter seemed to speak to the British art world of the 1940s and ‘50s. A huge mural of coal miners was chosen for The Festival of Britain in 1951. Exhibitions sold out. The writer JB Priestley bought an entire exhibition before it had even opened. In the years after the Labour election victory of 1945 and the nationalisation of the coal mines, Herman’s miners had an appeal, especially for Left-wing collectors and critics like John Berger.

There was another audience too. For Jewish refugees and dealers, this continental Expressionist style seemed familiar and evocative. Not Jewish but intensely European. Herman’s family tree was dominated by a particular European tradition of artists who had painted working people and the poor, from Courbet and Van Gogh to Meunier and Käthe Kollwitz. From the 1940s to the 197os this was the work Herman was associated with and led to an OBE and RA.

And yet, arguably, Herman missed his moment. In the last few years, it has been his depictions of refugees and Jews that have driven the revival of interest in his work. This major new exhibition at the Flowers Gallery, a powerful show at the Ben Uri in 2011-12, an authorised biography, recent TV programmes on BBC4 and Sky Arts, paintings at the Ben Uri centenary show at Somerset House and this summer’s exhibition about émigré dealers at Sotheby’s have led to his rediscovery. Refugees have become a major subject and his haunting images of a lost world speak to a new audience. Instead of monumental figures of labour, still, rooted in working class communities, he is now becoming increasingly associated with people on the move, fleeing for their lives.

Haunted by the past, my father was a warm and compassionate man. But he loathed sentimentality, in life and in art. What he tried to do was to capture something very uncomfortable and disturbing about people. He saw people as social, longing for community and companionship. But he also saw people as deeply alone, unbridgeably distant and apart. His humanism has something to do with bringing intimacy to aloneness. Only someone who had experienced — and continued to experience — such solitude could bring this to life.

Josef Herman’s exhibition, Journey, will be on show at the Flowers Gallery, 82 Kingsland Road, London E2 8DP to 20 January 2020