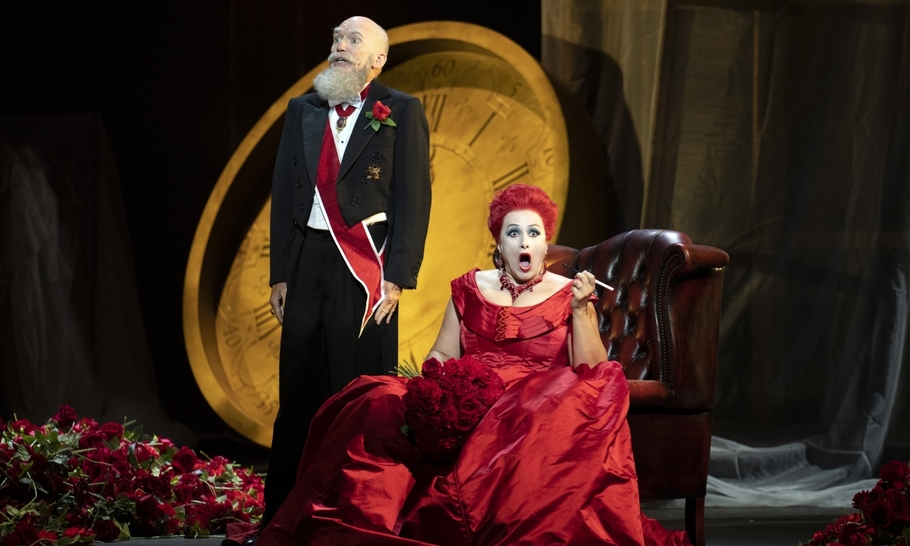 A centuries-old lady retains her youth and beauty thanks to an elixir. In Karel Čapek’s story, the Habsburg Emperor Rudolf II — notorious for his patronage of the occult — asked his alchemists to create a potion that would confer an additional 300 years of life. Hieronymous Makropulos, a Greek physician from Crete, provided it. He was told to try it out on his sixteen year old daughter Elina, and when she became gravely ill he was imprisoned as a fraud. But Elina recovered and escaped, taking with her the Greek document containing the formula. She became a great singer, reinventing herself under different names in different countries, but always with the same initials: E.M.

It is now 1922 and she is back in Prague, where Rudolf II’s court was based, to get hold of the document with the magic formula. While there she hears of a lawsuit that has been going on for 100 years: the Gregor family has been trying to prove their claim to a lucrative estate left to their ancestor Ferdinand Gregor by the Prus family in 1827. What Elina knows is that the Greek document she needs lies in an envelope stored with a will in favour of Ferdinand Gregor, the illegitimate son of Joseph Ferdinand Prus and … herself! She tells Gregor about the will, which lies in the house of his adversary Baron Jaroslav Prus. Gregor sends his lawyer Kolenaty to find it, and he returns triumphant.

This extraordinary story gradually emerges in the course of the opera, and the banishment of Doctor Makropulos from Rudolf II’s court is entirely in keeping with the emperor’s character. A true Renaissance man, he loved the advancement of knowledge, from astronomy to astrology (he was a patron of Tycho Brahe and Johannes Kepler, but also of Nostradamus) and from chemistry to alchemy (he also admired John Dee). When the English scryer and alchemist Edward Kelley failed to transmute base metals into gold, as promised, Rudolf had him thrown into prison.

In this new production of The Makropulos Affair for Welsh National Opera, director Olivia Fuchs has staged it in the time Janáček intended, after the First World War, when the newly founded state of Czechoslovakia was full of optimism and energy. The end of the war ushered in a 20- year period of democracy following the collapse of Habsburg rule. Prosperity continued until Hitler was handed the Sudetenland in 1938 and then occupied Prague the following year. There are parallels with what Russia has now done to Ukraine.

The opera’s staging works brilliantly well. In line with modern times Fuchs sees Emilia Marty, the latest incarnation of Elina Makropulos, as both victim and perpetrator. Bringing this compelling character to life is Spanish soprano Ángeles Blancas Gulin, who sang with passion and life- affirming energy.

An audience unfamiliar with the opera can be excused for finding it baffling without paying close attention to the surtitles, so it was an excellent idea for Mark Le Brocq to appear stage front during the scene change from Act 1 to 2 to explain the background. Le Brocq himself gave a fine account of Vitek, clerk to the lawyer Dr Kolenaty, sung by Gustáv Beláček — the one real Czech in an excellent Czech singing cast. As the contestants for the estate, Nicky Spence gave a superb performance as Albert Gregor, and David Stout sang with authority as Baron Prus, who finally hands Emilia Marty the document she desires in return for a sexual favour, though he feels cheated by her coldness. Yet she can still cast a spell over men, emphasised by Alan Oke as a delightful old aristocrat who recognises her as his mistress from 50 years ago, and the young Janek (Alexander Sprague) who is in love with her, despite also having a girlfriend (Harriet Eyley).

The ending is unexpected for those who do not know the opera, but suffice to say that three centuries living under assumed names in various countries is not to be wished on anyone. The Makropulos Affair, Janáček’s  penultimate opera before From the House of the Dead, is a fantastic work in every sense of the word. Under the baton of their music director Tomáš Hanus, the orchestra of the Welsh National Opera gave it a terrific performance. Well worth the trip to Cardiff to catch this rare but brilliant masterpiece.