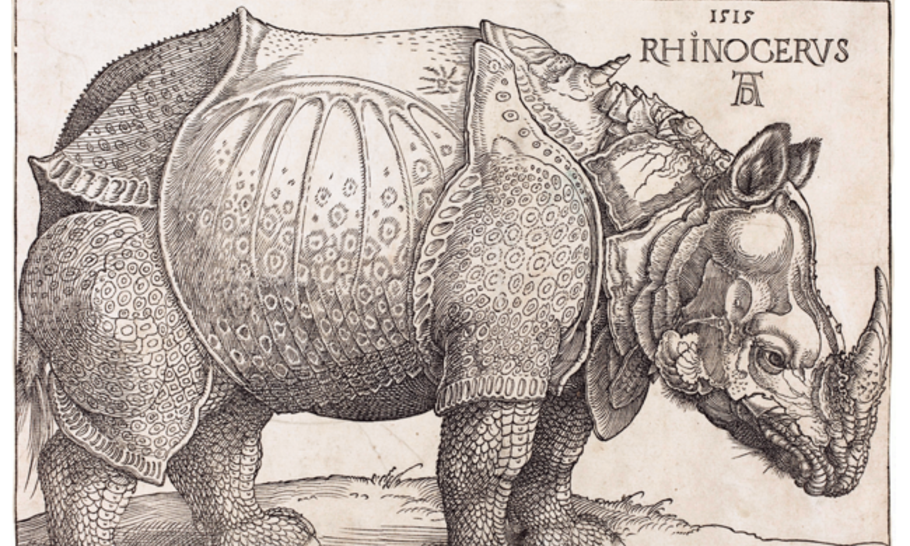 ‘Dürer's Rhinoceros’, a woodcut by German painter Albrecht Dürer in 1515

On Sunday July 18 2021, Trafalgar Square will be taken over by numerous chess manifestations designed to introduce the general public to the game. There will be opportunities to challenge Grandmasters, as well as receive tuition, but the highlight of the day will be a display of living chess, with actors taking on the characters of the chess pieces. Whether this will be a genuine clash between Grandmasters, as on similar occasions when, in the past, I have played against Viktor Korchnoi and Tony Miles, or whether the game will be a choreographed reconstruction of a classic masterpiece, is as yet unclear. In any case, living chess always offers a colourful large-scale spectacle, and, as we draw near to the revised “Freedom from Covid-19 Day”, it is certain that considerable crowds will be drawn to this chess-based entertainment in the heart of London.

Living chess represents slaughter without killing, while checkmate is death without dying. In a sense, this type of public extravaganza is a harmless recreation, representing a civilised reboot of the more murderous gladiatorial shows staged in the Colosseum and all over the Roman Empire. The citizenry of Rome in the first century AD were notably reliant on the superficial appeasement of “bread and circuses”, or “Panem et Circenses” as noted in the Roman poet Juvenal’s Satire X. Such inducements were usually provided by the Emperor of the time to ensure his popularity with the masses.

The Roman audiences were certainly offered some blood-curdling fare. Before lunch a variety of imported captive beasts were set upon each other. Following this carnage, criminals were executed at noon, and thereafter festivities continued with gladiatorial combat and set-piece battles, even extending to naval warfare, during which the Colosseum was ingeniously filled with water!

The Roman poet and satirist Martial (38–102 AD) in his Liber de Spectaculis (Book on the Spectacles), records an impressive litany of wild animals which found themselves facing unexpected, diverse and largely carnivorous opposition. The roster included: bears, tigers, leopards, lions, as well as some easily irritable and dangerous herbivores, such as elephants, wild bulls, boars, buffalo and Polish bison called wizants or wisents. After Martial’s time, for example, the games of 248AD involved 60 lions and 32 elephants, all facing a bloody fate, since the Roman audience definitely expected the animals to be slaughtered by the score. However, there was one exception, and this exception, the rhinoceros, oddly enough, might well have exerted a future influence on an obscure sub-variation of chess.

This variation was the so-called “Great Chess”. I have previously animadverted upon a chess variant with an extended board, preferred by the megalomaniac world conqueror Tamburlaine (1336–1405) in my column “White Queen – Black Queen” of June 12 2021. A type of Great Chess is also mentioned in the important manuscript of board games, chess, dice and backgammon, produced by the court of the enlightened Spanish King of Castile, Leon and Galicia, Alfonso X, known as El Sabio, or The Wise (1221–1284). This so-called Libro de Los Juegos contains an extensive collection of writings on chess, with over 100 chess problems and chess variants, and among those variants we find a type of Great Chess which incorporates a piece called a rhinoceros. It was, by the standards of early chess, with its restricted powers of Queen and Bishop, a powerful unit, combining the moves of the knight plus a diagonal element. 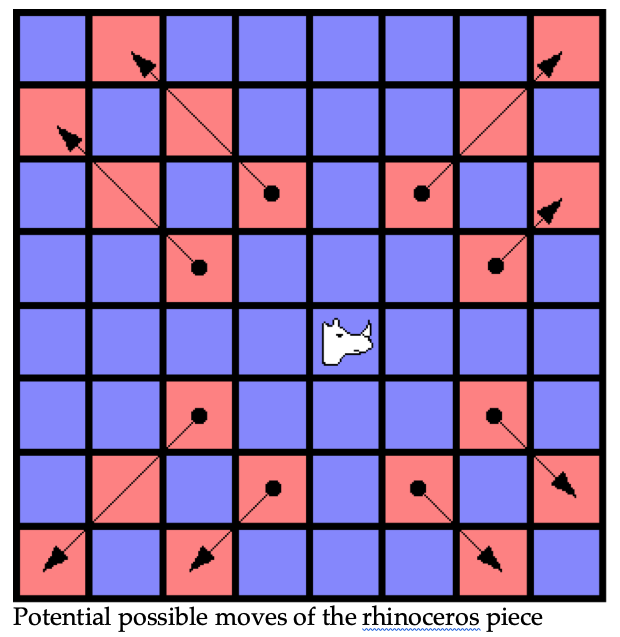 But whence originated that knowledge of the rhinoceros? When German artist Albrecht Dürer created his famous woodcut of a rhinoceros in 1515, he had to rely exclusively on eye-witness descriptions from Lisbon, since that same Lisbon Rhino, intended as a gift from the King of Portugal, Manuel I, to Pope Leo X in Rome, was the first living example of a rhino to have been seen in Europe since Roman times. So how did a rhinoceros end up as a chess piece in Alfonso’s book of board games (the original of which I had the privilege of inspecting in 1993 in the library of El Escorial, the monastery-fortress-palace of King Philip II of Armada fame)?

I believe that there are two routes to the formation of the Great Chess Rhinoceros of King Alfonso El Sabio. One is a poem by the aforementioned Martial, writing at the end of the 1st century AD, which describes the dramatic intervention of the rhinoceros in the Roman Colosseum. The other is a coin struck by the Emperor Domitian, featuring said rhino, used as a propaganda weapon to emphasise the dominating power of the Emperor (who owned the rhino) and by extension the Roman state. Both of these templates have survived and would have been available to Alfonso and his contemporaries, who clearly made good use of them, even to the point that modern board games enthusiasts can still play Great Chess, complete with rhinos, crocodiles, camels and giraffes, just as it was enjoyed in the royal courts of Alfonso and Tamburlaine over six centuries ago.

In Martial’s Liber de Spectaculis, he describes the fierce action of the rhinoceros in the Colosseum, while the coin, a “quadrans” (the lowest denomination of coinage in the Roman Empire between 27 BC and 301 AD), translated as a “farthing” in the King James Version of The Bible, was virtually unique in replacing the habitual portrait of the Emperor in most Roman coinage, with an image of the supremely powerful beast in the Emperor’s service. To emphasise the propaganda element, the quadrans was struck in vast quantities, dwarfing other denominations. 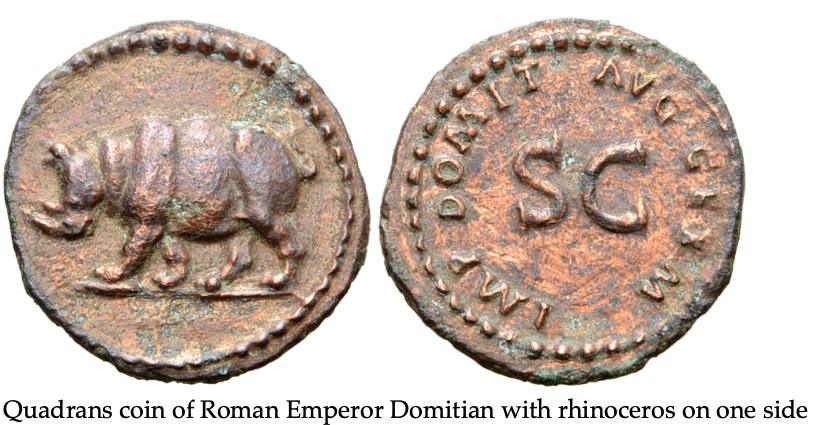 I conclude with Martial’s ringing words in description of the rhinoceros’ impact in the games. Taunted by the vociferous crowd, it emerged from its original placid, vegetarian torpor, into enraged fury, attacking furiously, tossing a full grown bear in the air like a bundle of straw, flinging two steers off the ground and causing lions, buffaloes and wizants to flee before it. From the point of view of the Imperial Exchequer, the rhino had one other big advantage: lions, tigers, leopards, bulls and boars might expire in hecatombs, but the impressively impervious rhino could be used time and time again.

“The rhinoceros did not at first promise much in the way of a lust for battle, but then, exhibiting its outstanding powers for you, Caesar, it displayed all over the arena, lowered its head and ignited into a terrible rage! How mighty a bull was it, to whom the bull was a mere projectile.

While the trembling trainers were goading the rhinoceros and the great beast’s anger was welling up, those watching were giving up hope of the promised battles of combat. But at length the fury we previously knew returned. For with its double horn it tossed a heavy bear thus, as a bull throws its own impaled victims to the stars.”

This week’s game is a living chess victory by José Raul Capablanca against Herman Steiner in 1933.

Raymond Keene’s latest book “Fifty Shades of Ray: Chess in the year of the Coronavirus”, containing some of his best pieces from The Article, is now available from  Amazon , and  Blackwell’s .