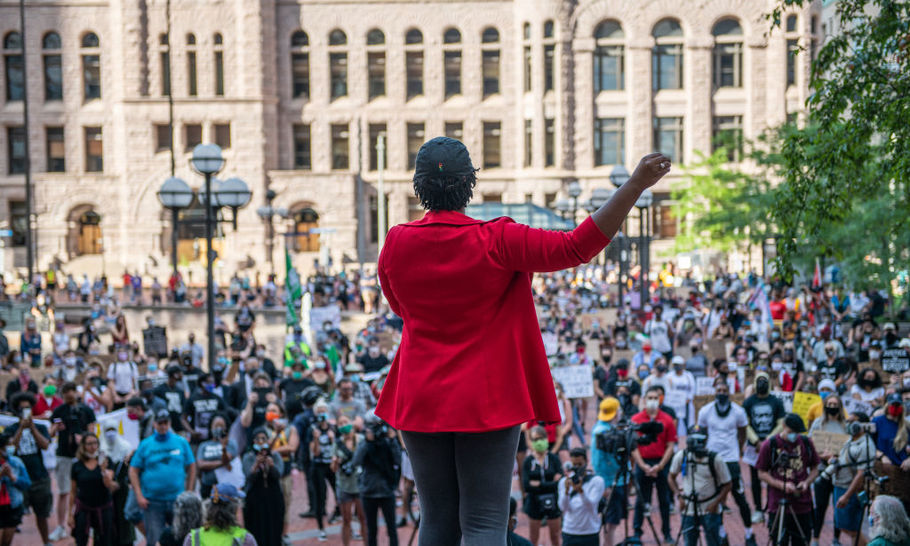 For one of my college courses, I read the Kerner Commission Report. It was an attempt by President Lyndon Johnson to investigate the police violence and protests during the summer of 1967. I read the report in 1993, the year after four police officers were acquitted of beating Rodney King, leading to five days of uprisings in Los Angeles. Sadly, those two moments were connected by brutal policing.

The Kerner commissioners tried to outline remedies: “This alternative will require a commitment to national action — compassionate, massive and sustained, backed by the resources of the most powerful and the richest nation on this earth,” the report reads.

Compassionate. Massive. Sustained. I would argue that these requirements have been a constant in Black protest in 1967, 1992, and in 2020. George Floyd was slowly asphyxiated over nearly nine minutes. Breonna Taylor was murdered by police officers who raided her home. To bring justice for them, Black Americans and those allied are not starting a call to action on police violence. This is a renewal.

The reason that these current protests are different in the aftermath of profound tragedy is that activism has challenged two structures identified in the Kerner report, police departments and news organisations. According to the findings, the media often exaggerated the “scale and character” of violence and property damage. This trend continues sadly, as I saw more coverage of a vandalised Minneapolis Target store than of the three officers who killed Breonna Taylor in her bed.

In the 1998 documentary, The Black Press: Soldiers Without A Sword, Vernon Jarrett, founder of the National Association of Black Journalists, said that white newspapers rarely reported on African American life and culture. They instead followed a singular focus.

“We were truly invisible, unless we committed a crime,” he said. Jarrett, born in Tennessee in 1918, lived through the segregation era of “separate but equal,” and the nod to that phrase in the Kerner Commission Report indicted the racial disparities that continue.

Consider the white protesters last May demanding an end to quarantine meant to slow the spread of the Covid-19 pandemic. Some of them carried assault-style weapons into the Michigan Statehouse, and in Kentucky, hanged the Governor in effigy. Defenders say they were never a menace and would never have used use deadly force. Neither were Floyd or Taylor a menace. American law enforcement has a history of treating passive black presence with more force than white aggression.

One of the Kerner Commission witnesses, the psychologist Dr. Kenneth B. Clark, gave a vivid but damning description of how past protests — and the conditions that made them necessary — were shown. He read the reports on the Chicago protest of 1919, Harlem in 1935 and 1943, and Watts in 1965.

“I must again in candor say to you members of this Commission — it is a kind of Alice in Wonderland — with the same moving picture re-shown over and over again, the same analysis, the same recommendations, and the same inaction,” Clark said.

Historically, the protest has been the people’s op-ed page. Of the five first amendment freedoms — press, speech, religion, redress of grievances, and assembly — freedom of the press was restricted by the wall of nearly all-white newsrooms. The difference now is that the changes called for by organisers and protesters mirror the recent shakeups in major newsrooms.

A coalition of black writers and allies at The New York Times pushed for change after the opinion page editor James Bennet approved a factually inaccurate editorial by Tom Cotton, Republican Senator of Arkansas, that condoned violence against protestors. A coalition of insiders and observers pushed for staffing changes at the Philadelphia Inquirer after a “Buildings Matter, Too” headline riffed on Black Lives Matter in a way that was dehumanising. The Dred Scott case famously affirmed that black lives were merely property and subhuman. The risk of recreating that notion should have been clear.  Even a clueless editorial call is a dangerous one, showing the lack of historical perspective that undermines progress. While the black newsroom numbers remain woefully small at 7 per cent, personnel changes are measurable in ways that apologies or diversity statements never will be.

The activism among journalists and commentators continues the work of the protestors and organisers.  This coalition has done a better job of responding to a note in the Kerner conclusion: “We have provided an honest beginning.”

The “honest beginning” is a staple of the black demands. A sustained vigilance in the new era of media and activism is the key to make sure the next steps are equally honest. We’ll see.

George Floyd LBJ Minneapolis The US