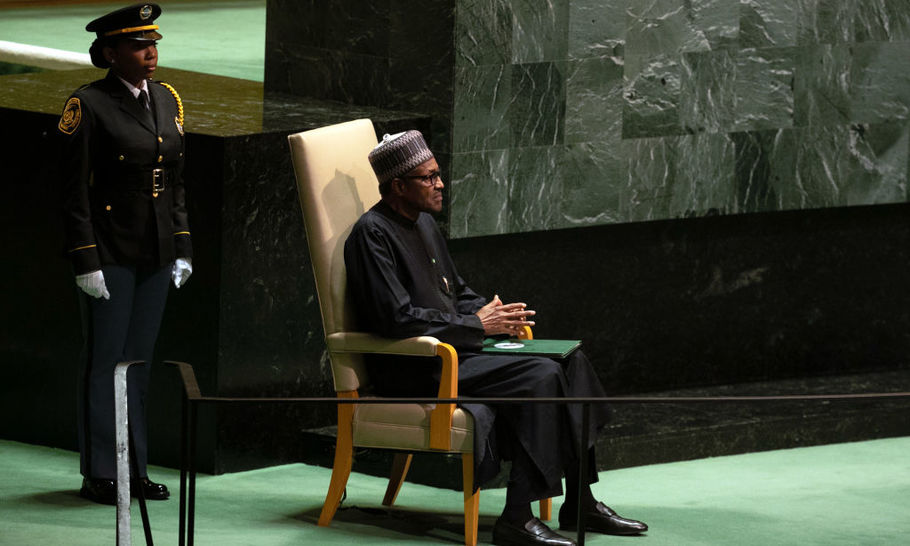 In 1972, six years after a coup d’etat launched an era of dictatorship in Nigeria, the celebrated musician and social activist Fela Kuti’s song “Je’Nwi Temi” (Don’t Gag Me) became an unofficial anthem for the struggle for freedom and democracy.

Kuti was jailed in the 1980s, and designated a prisoner of conscience by Amnesty International, which said his incarceration was a politically-motivated attempt to silence his criticism of the military government, led by General Muhammadu Buhari.

Buhari is back at the helm in Abuja, having declared himself a “reformed democrat” ahead of election wins in 2015 and 2019. EU election observers said voting in 2019 was “marred by violence and intimidation.”

Kuti died in 1997 but his fight for freedom of speech has come back to life in a country where journalists, activists and bloggers are harassed, detained, arrested, charged, or simply disappeared.

Buhari’s government has sought to legitimise its crackdown on freedoms that are guaranteed by the constitution by claiming it is acting in the interests of national security. Its armed forces are currently fighting a violent insurgency by Boko Haram Islamist extremists in the country’s northeast.

Now it wants to push through what is widely known as the “social media bill” — officially the Protection from Internet Falsehood and Manipulation Bill 2019, which aims to regulate social media.

If it becomes law, it would empower the authorities to shut down the internet in order to silence voices on social media. Anyone deemed “likely to be prejudicial to national security” and “those which may diminish public confidence” in Nigeria’s government could fall foul of the proposed law. (A major supporter of this bill is Senator Elisha Abbo, who was caught on camera earlier this year hitting a female sales assistant in a shop selling sex toys.)

Many Nigerians are asking how a law that includes fines or imprisonment as punishment for stating opinions that might annoy the government would work in a democracy with free speech as a core principle.

When campaigning for the presidency in 2015, Buhari promised the heads of major media organisations that he would uphold the constitution, and maintain “respect for the media, respect for the right to free expression and freedom of speech”. If they believed him then, they know better now.

Many journalists fear for their safety, and some have even left the country. “I’m hearing things like incitement, treason and sedition charges against me. I’m scared and worried for my safety,” one journalist said by text message.

The previous day, the broadcaster he worked for was temporarily closed down by the state-run regulator amid allegations that it had breached its licence. The next day, the journalist left Nigeria and has not returned.

His is not an isolated case. In January, soldiers raided the offices of one of the country’s leading newspapers, The Daily Trust, and arrested reporters after the publication of a report on the war against Boko Haram. The newspaper was accused of divulging “classified military information”.

In March, newspaper editor Jones Abiri was re-arrested after previously being detained for two years, with no access to a lawyer or his family. He was held on charges of terrorism, sabotage and accused of committing cyber-crimes. It is believed that he was investigating a story about corruption in the oil rich Niger Delta region. His case is due before federal court in December. In both these cases, national security was cited as justification.

Elsewhere, radio stations have been bulldozed and presenters taken off air on the regulator’s orders.

In August, the activist and former presidential candidate, Omoyele Sowore, who runs an online news outlet called Sahara Reporters, was arrested on charges of treason, money laundering and harassing the president. He pleaded not guilty and was released on bail in December — only to be rearrested within hours.

Social media regulation was first tried in 2015 but the government dropped its plans amid a public outcry. A cyber crimes law did get through that year, and has been used to charge at least five bloggers, as well as Sowore. A hate speech bill — which allows for the death penalty if hate speech is proven to have led to a person’s death — has passed a first reading in the Senate.

Nigerians are loquacious, and have taken to social media with gusto. As a result, platforms like Twitter and Facebook have become hugely popular as communication tools in a country lacking state-of-the-art infrastructure. This has made people vulnerable to disinformation.

One rumour that Buhari apparently disliked concerned his significant weight loss after he re-emerged into public view after an illness. Social media circulated stories that he’d been cloned, or replaced by a Sudanese — some Nigerians seemed to believe the claims.

The military hasn’t escaped either, facing criticism for its failure so far, as West African’s biggest military, to defeat Boko Haram. In 2018, senior leaders began attending workshops on how to reclaim the narrative, which the Army’s spokesman, Sani Usman, said was “critical to the public perception and image of the Nigerian Army.”

Human rights activists view social media as one of the last remaining outlets where Nigerians can express their opinions. They fear a return to the oppression of the 1970s and 1980s.

In a brave and telling move on December 11, the Punch group of publications announced that it would reinstate the president’s military rank when referring to him, highlighting the repressive shadow under which the media now operates.