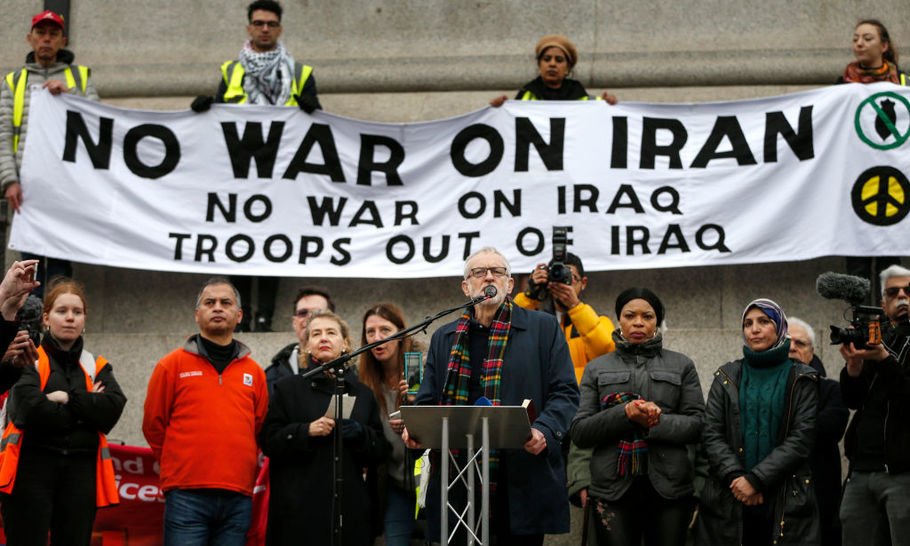 Jeremy Corbyn’s anti-imperialist ideology has seen him align with brutal dictatorships, lay a wreath on the grave of terrorists and remain uncritical of the Venezuelan regime and Putin’s actions on UK soil and in Ukraine. When it came to the recent rising tensions between Iran and the US we knew where Corbyn would stand: staunchly against the US, while clumsily trying not to show an overt support for Iran. But does Corbyn really understand the Middle East?

Predictably, Corbyn’s tweet referred to the shooting down of a Ukranian passanger jet by Iranian missiles as a “crash”. (The Iranian government later admitted its responsibility.) He has since gone on to compare the killing of these 176 innocent civilians with the US drone strike on General Qasem Soleimani, leader of the Quds Force, an organisation listed as a foreign terrorist organisation by the US. The Quds Force is renowned for supporting terrorist organisations, including Hezbollah and Hamas, in their work as killing machines across the Middle East.

Some may ask “What does it matter what Corbyn says anymore?”. He was a catastrophe for Labour and will soon disappear from UK politics. This misses the point. The threat is not from him as a leader, but from the Corbynista far-left climate he leaves in his wake.

This month began with a UK-registered charity, the Islamic Centre of England, holding a vigil for Soleimani. Seyed Moosavi, director of the Islamic Centre, praised Soleimani as a “dedicated soldier of Islam” who had died at the hands of “the most wicked members of the human race”. Video shows Massoud Shadjareh, from the Islamic Human rights Commissiomn, calling the West the “enemy” and vowing to “make sure there are many more Qasem Soleimanis”. The event saw more than 2,000 attend.

For those working in counter-extremism in the UK, the rise of Corbyn was a troubling time. His affiliation with Islamism and anti-Semitism made him a rich fertiliser for extremist views. Once extremism had become embedded in the UK’s left, this gave it an almost impenetrable defence. The view became not only that the West was evil, Israel needed to go, but that other people who held to that narrative including (but not limited to) Islamists, anti-Semites, Assadists and terrorists, were allies. The brave Muslims and human rights activists who took a stand were few in number and arguably limited in effect.

However, as the month developed, news emerged of anti-regime protests in Iran and across the Middle East. In Syria, people gave out sweets to celebrate the death of Soleimani. In Iraq, people marched in celebration, glad that the deaths of Iraqi protesters had been avenged. In Tehran, crowds refused to walk on US and Israeli flags painted on the ground, stating that the “US is not our enemy, our enemy is right here”. Anti-Iran protests in Lebanon have been ongoing since October.

The Palestinian women’s rights advocate Ali Fanoun Tamimi, expressed the desperate longing for peace in the region. He asserted that Soleimani and organisations like Hamas, which receive support from Iran, bring chaos and instability to Palestine. He also said there was widespread disgust at the actions of Soleimani, claiming that he has been responsible for killing millions in Syria and Iraq.

The people of the Middle East are not, as Corbyn and his left would have it, entirely anti-Western. Not all of them are pro-Islamism either. What people there want, is what people want everywhere — human rights, freedoms and human dignity. This overwhelming opposition to Iran’s tyrannical Islamist regime may be the crack in the far-left narrative we so desperately need.