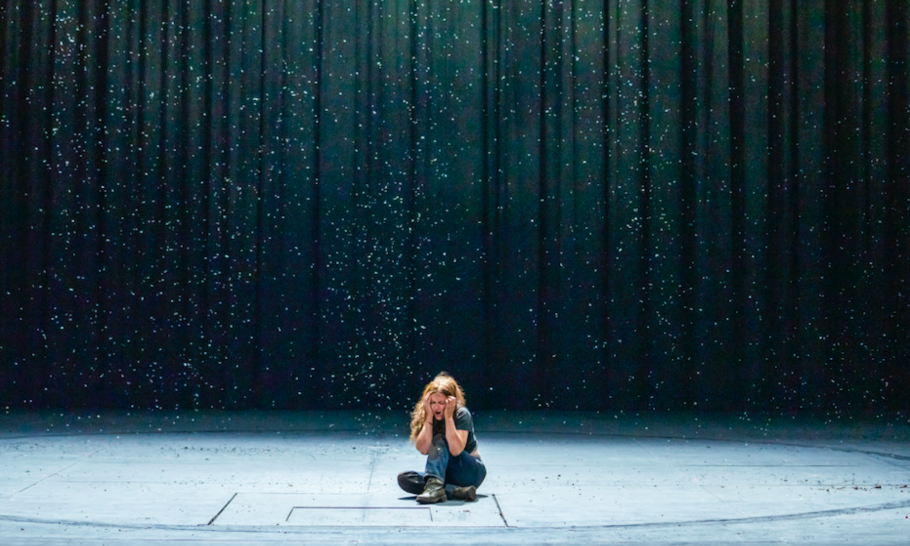 When the composer Anton Bruckner once attended a performance of Die Walk üre (“ The Valkyrie ”), he opened his eyes towards the end and said, “ Why are they burning Brünnhilde?”

They weren ’ t, of course. Wotan had merely recovered his composure and agreed to surround her with a ring of fire, so that only the noblest of heroes (Siegfried in the next opera of the Ring cycle) could break through to take her as his wife. Sadly, at the last minute some bureaucrat at Westminster City Council objected to the flames and, as the English National Opera ’ s Artistic Director Annilese Miskimmon told the audience before curtain-up, we would just have to use our imaginations.

Fortunately, the ENO orchestra , under the baton of Music Director Martyn Brabbins, gave a superb account of Act III, which features Wotan ’ s wonderful farewell to his daughter. As the sleeping Brünnhilde rose above the stage to be suspended in mid-air, however, the flames were grievously missing. This new production by Richard Jones inaugurates a new Ring, with Rheingold appearing in the 2022/23 season, and Siegfried and Götterdämmerung in 2024 and 2025. It is a joint production with the Metropolitan Opera in New York, whose huge clout would surely prevent spoilsports in City Hall from ruining the end of the show there.

Here in London , however, we already gain an intriguing glimpse into Jones ’ s ideas. Three large birds that appear twice on stage right represent Wotan ’ s ravens, the Valkyries ’ horses (magnificent heads atop a body loosely covering an actor) tremble meaningfully, dead heroes are raised high above stage on their way to Valhalla, and a dancer in black performs an extraordinary routine at the start of Act III. On her back is a mass of what looked like metal tubes, the same as the equipment carried by black-clad figures during Hunding ’ s appearance early on, but what they represent was a mystery to me.

Less mysterious was the image of Alberich, his forehead stamped with the word Nibelung, appearing in the background during Act II. He it was who formed the ring that Wotan stole before being forced to give it up to the giant Fafner as payment for Valhalla. The pregnant woman we also see in these background images is the mother of Alberich ’ s son Hagen, who attempts to recover the ring, and who speaks the last words of the text (“Get back from the ring!”) at the end of Gö tterd ä mmerung as the Rhine overflows and the Rhinemaidens take back their stolen gold. There is still four years to wait for that finale, but in the meantime there is intriguing imagery in this production, and the musicianship of singers and orchestra did the ENO proud.

Matthew Rose in his role debut as Wotan sang with suitable gravitas, while Rachel Nicholls has sung Brünnhilde extremely well in smaller venues but lacked the easy tone of authority one associates with this role. In other role debuts Nicky Spence and Emma Bell gave convincingly bold accounts of Siegmund and Sieglinde, and Brindley Sherratt made an outstanding Hunding, his rich bass allowing such perfect diction that one could grasp every word. In fact the diction was so good throughout that the surtitles were almost entirely unnecessary. Sadly, Susan Bickley as Wotan ’ s wife Fricka performed the role (very convincingly) on stage, but as she had a cold the voice was that of ENO Harewood artist Claire Barnett-Jones singing powerfully from a box on the side.

Hearing this opera in English may not be to everyone ’ s taste, but grasping the words as they are sung gives most people a readier understanding of Wagnerian opera, and the new translation by John Deathridge is very good. In view of the lack of fire it is ironic that he translates the German word Herd as “fire” when Siegmund first utters it, though later as “hearth” as he warms up under the care of Sieglinde. The performance too warmed up after a slightly slow start that lacked the urgency the music should convey.

It is now too late to change the timings, but I wish the ENO had started it earlier to allow for a long enough interval for the audience to eat out, rather than having to dine either before or after.