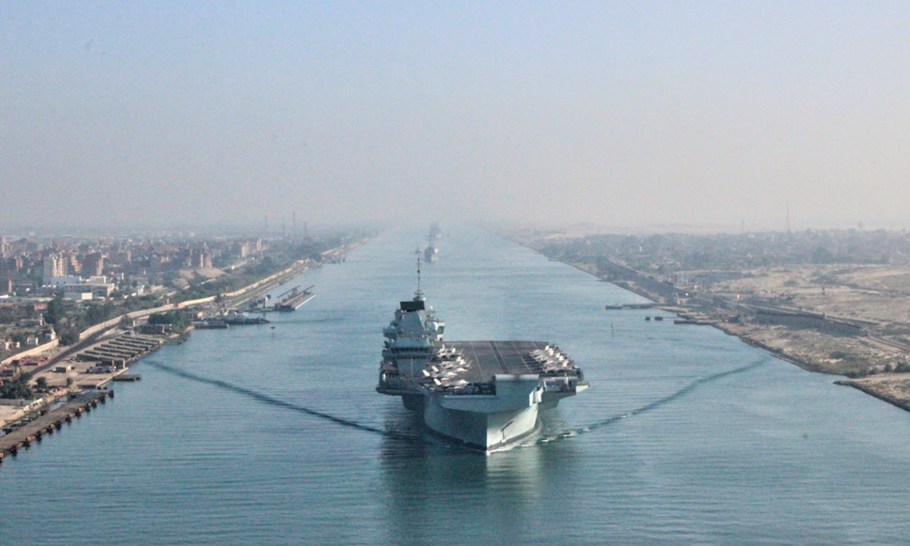 The pride of the Royal Navy, HMS Queen Elizabeth, is about to begin perhaps the most dangerous deployment by a British task force since the Falklands War almost forty years ago. This huge aircraft carrier, the largest warship ever commissioned by the world’s oldest navy, will sail within range and perhaps even sight of the Chinese mainland. Beijing lays claim to the entire South China Sea; state media have been sabre-rattling in anticipation of a tense encounter with the People’s Liberation Army (PLA) navy.

Her precise route is secret, but it is not impossible that the Queen Elizabeth will pass through the Taiwan Strait — which would almost certainly be seen as a provocation by the Chinese. It is known that as the flagship of the UK Carrier Strike Force she is accompanied by the US destroyer USS Sullivans and the Dutch frigate HNLMS Evertsen. The other British escorts include the guided missile destroyer HMS Defender, the anti-submarine frigate HMS Kent and the nuclear attack submarine HMS Artful.

The bellicose Beijing tabloid Global Times has already warned the British-led fleet to expect a hostile reception from the People’s Republic’s forces, which will simultaneously conduct exercises elsewhere in what the West is determined to preserve as a busy international waterway. “The PLA will monitor the UK warships’ activities, stand ready to deal with any improper acts, and also see this as a chance for practice and for studying the UK’s latest warships up close,” an unnamed naval expert told the paper.

While any conflict is highly unlikely, the passage of the task force through waters that Beijing clearly intends to transform into a Chinese lake is not without risk. The mere fact that a British carrier has had to sail halfway round the world to assert international law underlines the danger posed by the global ambitions of the new superpower. After Beijing’s Foreign Minister Wang Yi boasted to a visiting American diplomatic mission this week about the “unstoppable” rise of China, it is clear that under Xi Jinping the People ’ s Republic is on a collision course with the West.

Some British experts are nervous about the exposure of such a valuable naval asset to such hostile attention on her maiden global deployment. Memories in the Royal Navy are long: nobody has forgotten the sinking of the Prince of Wales and Repulse by Japanese aircraft off Singapore in December 1941 — the worst British naval disaster of the Second World War. Along with the destruction of the US Pacific Fleet at Pearl Harbor a few days before, this débacle hastened the demise of the battleship. Overnight, the new capital ship became the aircraft carrier and Midway, the decisive battle of the Pacific War, was fought between carrier-borne fleets of aircraft whose mother ships never sighted one another.

Less well-known but no less unforgettable, however, are the Royal Navy’s aircraft carriers that were sunk in the war. They include the fleet carriers Ark Royal, Courageous, Glorious, Eagle and Hermes, as well as five escort carriers. More than 2,000 men were lost with these ships. Most were sunk in the Atlantic and Mediterranean by U-boats; one (Glorious) by the German battlecruisers Scharnhorst and Gneisenau; and one (Hermes) in the Indian Ocean by aircraft from the Japanese fleet. These losses, though grievous, were not as heavy as those of the United States, which lost five fleet carriers and six escort carriers in the war, all in the Pacific. The Imperial Japanese Navy lost all 21 of its aircraft carriers, including 11 fleet carriers.

In other words, aircraft carriers are by no means invulnerable. In the Falklands War, the loss of either of the British aircraft carriers, Hermes and Ark Royal, would have been catastrophic and might have brought down the Prime Minister, Margaret Thatcher. The French-made Exocet missiles used to deadly effect by the Argentinian air force against other Royal Navy warships were kept away from the carriers by their own Harrier “jump jets”. It was, however, a close-run thing.

The weaponry available now to the Chinese and other potentially hostile powers — especially Russia — is incomparably more formidable than anything used in previous conflicts. While defensive armouries have also kept pace, the sheer scale of the PLA’s arsenal is daunting. Operating so close to the Chinese mainland renders the Queen Elizabeth a target for countless land- as well as seaborne aircraft and missiles. So there is an element of bluff about this deployment — and the presence of the USS Sullivans is essential. The Chinese know that an attack on the UK Carrier Strike Force would also be an attack on the United States. That is not a risk they are prepared to take. Not yet, anyway.

Critics damned the decision of the Blair government to build two giant aircraft carriers as an act of hubris. It is certainly true that recent Conservative governments have cut defence spending in real terms to the point where the Royal Navy has barely enough ships to escort its carriers, let alone enough aircraft to fly from them. However, the Queen Elizabeth and her sister ship the Prince of Wales are invaluable assets in all circumstances short of a Third World War.

Flying the flag in the Indian and Pacific Oceans is a visible sign of Britain’s global presence, not only as a member of Nato but also as a key player in the wider alliance of the free world. The task force will have visited 40 countries by the time it returns. Prestige is unquantifiable, but it matters. Democracies require leadership no less than dictatorships. Defending the rule of law in regions where it is endangered is what democratic leadership is all about. We should toast HMS Queen Elizabeth and her escorts on their courageous mission. Once it is safely over, we should offer up to the Almighty our gratitude for those in peril on the sea.