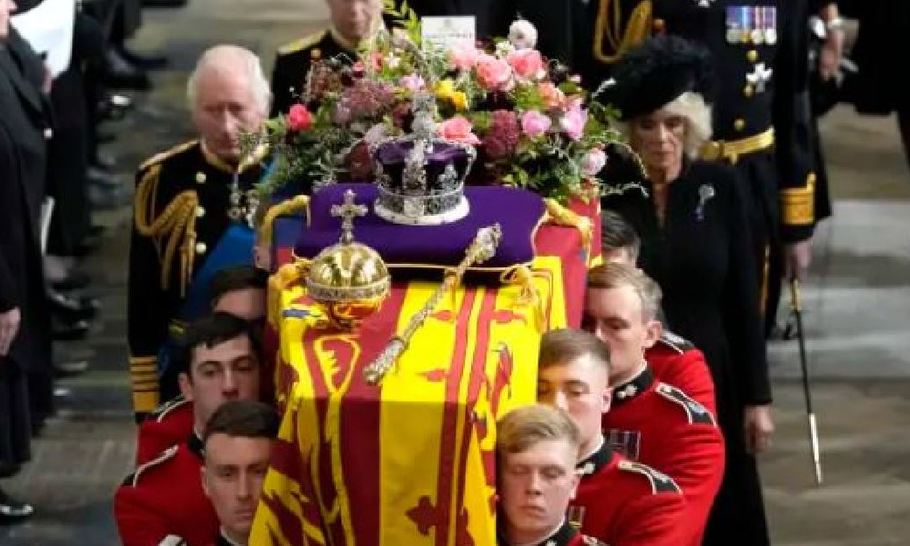 The state funeral of Queen Elizabeth II was the grandest of public ceremonies: bigger than politics or power, rising above simple understanding of nations and empires, more moving than ideology and philosophy. The whole world watched as we came to honour a woman who lost herself as an individual to become an embodiment of service to others. That is why today will be remembered in history.

Nine days ago the late Queen’s body went out the doors of Balmoral on the shoulders of estate gamekeepers. No cameras were there to witness the event. Moments later her coffin left the gates of the castle and into the public gaze. At this point the woman who, but for the Abdication crisis, might have been known as Elizabeth Mountbatten disappeared and a Queen went to be buried. For the rest of her marathon journey to the grave there were few examples of the personal: her fell pony, Emma, was brought out to watch the procession go past in Windsor Great Park; the Corgis, Sandy and Muick, came out to witness the hearse’s arrival into the Windsor Castle Quadrangle. These glimpses of the private woman were seldom and few. Instead the coffin became an embodiment of public consciousness, devoid of individuality.

The funeral excluded some of the normal themes in our national discourse. The continuing Netflix style subplot of William and Kate vs Harry and Meghan was dropped, for a few hours at least. Celebrities were cast to the wings, left madly waving from the lying-in-state queue. The funeral had none of the materialistic frocks and locks commentary endured at royal weddings. Everyone in black or uniform; anonymous in grief or service.

In essence, individualism was sacrificed on the altar of service and nation. Westminster Abbey, and London at large, could not have played the role of ceremonial backdrop better. The gathered world leaders in the Abbey seemed to be attending the canonisation of the patron saint of statesmanship, not the funeral of a mere British head of state. Prime ministers and presidents seemed like a group of bickering adolescents juxtaposed against the backdrop of history and the figure of The Queen.

The BBC was left to do its job as the national broadcaster, rather than trying to justify itself to carping critics. On television Huw Edwards did well, supported by Fergal Keane and Sophie Raworth. It was great to be back in David Dimbleby’s safe hands for the committal. The conclusion from a clearly emotional, but dignified, Kirsty Young was beautiful. The radio coverage was an alternative voice but equally professional and polished, with Martha Kearney at the helm.

Today belonged to the many institutions and little platoons who had served the late Queen and, by association, the country and the world at large. The armed forces and Church were the weightiest players but civil servants, the NHS, charities, household staff and politicians played their part. Over her life she merged herself into these institutions, becoming their embodiment, from the needy to the aristocratic.  In an age which is so focused on individualism, and contemptuous of the collective, this funeral stood for something greater and higher-minded than any personality. There was no wailing and bawling from the crowds, only reflection and silence — rarely seen in the modern world.

The military pomp and circumstance will have paraded into the consciousness, not just of this country, but the world at large.  This was in contrast to the spiritual aspects of the day, which were made all the more poignant. The committal service in St George’s Chapel bore witness to an “uncomplicated and committed faith”, which enabled the Queen to keep calm and forge a confident path into a rapidly changing future. This meant that the nation was able to grip that ever altering world too. That is why her loss has been so unsettling.

The last acts of the service in St George’s Chapel were deeply affecting and poignant: a reading from the Book of Revelation, placing the crown and orb on the altar, the strains of a lone piper and the breaking of the Wand of Office. The message: worldly things have passed away but, if we stay true to the Queen’s noble example of service to her people and the memory of her love of her fellow man, we can take on a new age with confidence.