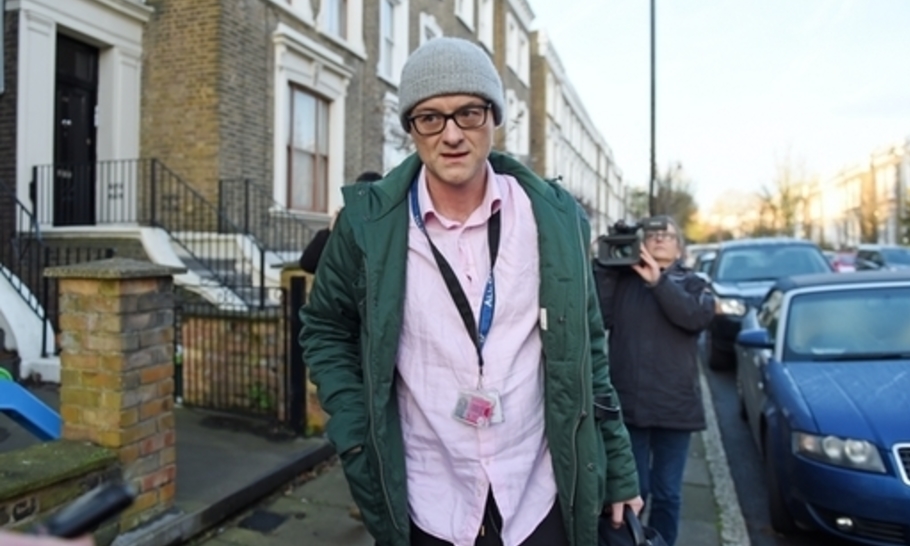 So Matt Hancock was “speechless” (though possessed of sufficient faculties to say so) when scientific adviser Neil Ferguson was exposed as having broken the government lockdown guidelines he had helped devise. The Health Secretary went further, and suggested the police should get involved. Tory MPs flocked to social media to condemn Ferguson’s hypocrisy, and to warn of the life-endangering damage his “selfish, callous, stupid” breach would do to the message that everyone “should stay home, protect the NHS, save lives.”

Tory-supporting newspapers found in the destruction of Ferguson yet another excuse not to lead their papers on death rates that had the UK racing past Spain and Italy in the Covid mortality league tables. BBC political editor Laura Kuenssberg tweeted simply a link of the Telegraph scoop on Ferguson with the words: “That’s a hell of a story.”

Yet, as the Mirror and the Guardian broke the story last night that Dominic Cummings had travelled with his family and his coronavirus to stay at his parents’ home in Durham, Hancock was silent.

Most Tory MPs kept their Twitter fingers to themselves. Right-wing journalists, as I discovered when debating the news on Radio Five Live with someone from the Guido Fawkes website, morphed into government spokesmen and defenders, urging patience “until we know the full facts.” They were quickly armed with, and seemingly happy to deploy, the threadbare defence that it was an issue of childcare that required Cummings to run in front of the cameras outside Number 10 several weeks ago (there are several back doors by the way) and head to Durham as he, Johnson, Hancock and others in a clearly not very socially distanced Downing Street were falling ill with the virus.

Laura Kuenssberg’s first tweet on the story this time was one written directly to the Mirror journalist Pippa Crerar: “Source says his trip was within guidelines as Cummings went to stay with his parents so they could help with childcare while he and his wife were ill — they insist no breach of lockdown.” Not a good look, Laura, really not. By this morning, the parents have seemingly become a sister, say “sources close to Dominic Cummings.” Same source, new bull****?

As for the Telegraph, which led the charge with the Ferguson story, they are leading this morning with something about Boris Johnson and Huawei.

I thought the reaction to the Ferguson story was over the top and disproportionate, and at the time I largely sat it out. But as Cummings is a major cog in the very government/media machine that ate up the scientist and spat him out, I think the reaction of many last night was the opposite of “over the top”. Initially it didn’t even make the main BBC headlines. As the journalist Steve Richards pointed out, had it been me under Tony Blair, (had I been so stupid/arrogant as to do what Cummings had done) it would have led the news, had at least four items on the Today programme, and spawned an instant non-scheduled Panorama special.

Is the Cummings story as important as the ever-rising death toll, and the seeming inability of our government to do as others have managed to do, and get this virus under control? No. Is it of more significance than their failures and lies about testing, their wretched incompetence in getting proper equipment to frontline staff, their near criminal negligence with regard to care homes? No. Is it of greater direct impact in the lives of more people than will be hit by the badly-timed, economically disastrous, too little too late quarantine nonsense spouted yesterday by Home Secretary Priti Patel? No.

But does it expose once more something genuinely rotten at the heart of the Johnson government? Yes it does. Should Johnson sack Cummings? Yes, he should, because Cummings was part of the campaign that saw Ferguson thrown to the wolves; he was even more so a part of the design of the messaging that led to millions of people — good, decent citizens — doing as the government ordered, even if it meant young kids couldn’t see grandparents, adult children couldn’t see elderly parents, holidays had to be scrapped, and normal life had to be suspended. “Hypocrisy” does not even get close to capturing Cummings’s lockdown breach.

Of course Johnson will do everything he can not to sack him, unless those ministers and MPs who stayed silent suddenly find a spine, because as we have seen often enough already, he sees established rules and norms as being for others, not him and his cronies. But also, it would leave him exposed to a rather important question, to which the Opposition and non-supine journalists need to get an answer: Did he know, even as Number 10 were helping to stir the pot that eventually saw Catherine Calderwood fall on her sword, that his own right-hand man was, if the Northern neighbours are to be believed, dancing to Abba in his parents’ lovely Durham garden even as Scotland’s chief medical officer was resigning?

Was Johnson among the “small number in Downing Street” who, Laura Kuenssberg’s famed “source” now tells us, were aware of Dom’s Durham flit? Or was Johnson, like the rest of us, spun to believe, not least by Cummings’s wife Mary Wakefield, that she and her husband were in “London lockdown”. I quote there from the Spectator, where she works, and where she wrote a long Mills and Boon-style piece about looking after “Dom”. I have read it again this morning, looking for another word beginning with D and ending in M – Durham. It is not there. Surely some mistake?

“Was he fighting off the bug, or heading for a ventilator?” wrote the anxious Wakefield.

Well no, it seems, the gasping, bedridden, barely able to breathe Cummings was somehow heading for the North East. This is actually far worse than Ferguson and Calderwood, partly because of distance, but also, Cummings was infected whereas they were not.

I hope the Spectator, and the BBC Today programme, which bizarrely had her read part of her paean of praise to “Dom” on Radio 4, will ask Wakefield to write a clarification. Or maybe they knew too. All in it together?

Throughout the day, expect the Tory trolls and the volunteer propagandists from the right-wing papers, and the spineless MPs hoping one day to get their bums into a ministerial car, to say that this is all a bubble story, of little interest to, or impact on, anyone beyond Westminster.

For sure, plenty will shrug their shoulders and head out to enjoy the sunshine. But never underestimate the power of the concept “Lions led by donkeys.” It emerged from the First World War, where incompetent and indifferent generals — the donkeys — were blamed for the deaths of so many young soldiers — the lions.

From Johnson down, the government has sought to make Covid their big war, with the talk of heroes and frontlines, resilience and resolve, and faux Churchillian addresses to the nation. Plenty of heroes have died on the frontline, and thousands more have died elsewhere because the “generals” in Downing Street got so many of the big calls wrong.

If the country felt that we were being well led, by an honest, hard-working, dedicated leader with his heart in the right place, and that he was surrounded by effective, capable, competent ministers and advisers, together ensuring that all that needed to be done to get us through the crisis was properly being done, most people would not give a damn about “Dom”.

But millions do not feel that. They feel this is becoming a disaster, and many more have died than should have done because neither Johnson nor his Cabinet or advisers are up to the task. Add to their deathly arrogance and incompetence the lying, the hypocrisy and the sense of an elite that believes there is one law for them and another for the people who elected them, and you have a political meltdown in the making. If it sweeps this bunch of liars and chancers away, it cannot come a moment too soon.