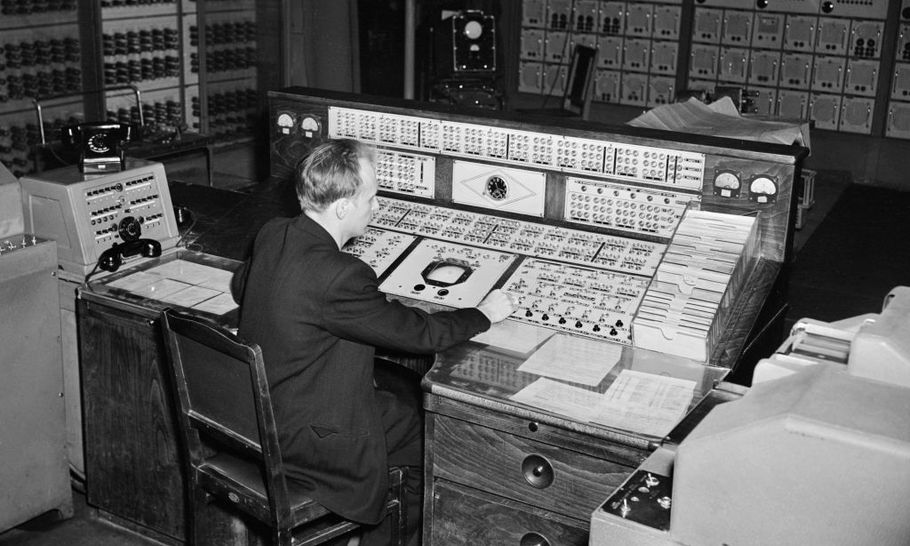 Norbert Wiener’s book Control and Communication in the Animal and the Machine was published in the US in 1948. He called this new subject “Cybernetics”, resurrecting the Greek word kybernetes meaning governance, steerman, pilot. The term first appeared in an essay by Andre Marie Ampere (the same man after whom the unit of electric current is called) on civil government that he believed did need some control. Wiener was of the same opinion, but his interests were much wider. With today’s terminology we could call his vision the communications, control, computer symbiosis.

The book, in due course, reached the Soviet Union, where it fell into the hands of philosophers. They were not amused. They could recognise an assault on the fundamentals of Socialism when they saw one. The titles of some of their articles, which are quoted by Benjamin Peters in his book How not to network a nation (2017), clearly demonstrated their disapproval: “Cybernetics, an American Pseudo-Science”, “Cybernetics, a Science of Obscurantists,” “The Science of Modern Slaveholders”. An extract from the Concise Dictionary of Philosophy, as late as 1954, retains this scepticism: “Cybernetics clearly reflects one of the basic features of the bourgeois worldview — its inhumanity, striving to transform workers into an extension of the machine, into a tool of production, and an instrument of war.”

It was never easy to rebut Soviet theories based on ideology. Trofim Lysenko managed to ruin Soviet genetics and agriculture by his theory of the inheritability of acquired characteristics, supported strongly by Stalin. Lysenko flourished for nearly three decades and was discredited only after Stalin’s death. Fortunately for Soviet science the philosophers’ stronghold on cybernetics was weakened by scientists and engineers eager to get involved with that “Obscurantist” science.

Two famous Soviet mathematicians, Alexei Lyapunov and Sergey Sobolev, and a mathematically minded young engineer, Anatoly Kitov, a colonel in the Soviet Army, took up the challenge. They published a paper, the very first paper that dared to address the issue, extolling the virtues of Cybernetics and claiming that the theory was particularly applicable to Soviet circumstances. They were right. The control and optimisation of large systems was exactly what the Soviet authorities needed. Central planning is a key element of any socialist economy where all the means of production are in the hands of the state. It was always a problem to manage such an economy, to prepare plans for 50,000 industrial units and 27,000 farms. Those in charge, who devised the plans, always reported perfect planning and perfect execution of the plans. The consumers who had to queue even for the necessities, disagreed.

With the advent of Cybernetics, there was a golden chance to solve all their economic problems. By the early 1960s, the Russians’ opportunity was cause for alarm in the US, just at the time when there was also worry about the “missile gap” between the west and the Soviets. After the Soviet successes in producing the atomic bomb, the hydrogen bomb, the launch of the first satellite, and putting a man in space, some people in  the US military genuinely feared that there might be something in Kruschev’s boast, “We shall bury you”. In particular, Arthur M Schlesinger Jr, one of Kennedy’s closest advisers believed, for a while anyway, that the combination of planned economics with cybernetics was very powerful.

Nikita Khruschev’s previous admiration of Stalin did not prevent him from denouncing his crimes in January 1956 at the 20th Congress of the Communist Party. Kitov, the most convinced believer in the power of cybernetics wrote in January 1959 a letter to Khruschev, proposing a transformation from the manual and personal forms of management (the administrative staff at the time stood close to one million) to automated systems based on computers. He proposed a unified automated management system, claiming that it would lead to an enormous increase in efficiency while acknowledging that it would also lead to drastic reduction in administrative staff..

More formal propositions came from the not much earlier established Cybernetics Council. They proposed “a single uniform system of information and computer service, meeting the demands of all institutions and organisations in the processing of economic information and in the execution of computer work”.

Kitov proposed dual-purpose communication lines accommodating both civilian and military applications. He submitted his proposal to the Kremlin, whence it was sent for evaluation to the military authorities. They were appalled. Whoever heard of allowing civilians into the heart of a military establishment? The people most shocked were Kitov’s immediate bosses. They were disappointed that a young man of promise, a good soldier, a faithful member of the Communist Party, could come up with such proposal. They rejected the proposal out of hand, and just to make sure that they will not receive another such proposal from Kitov, they expelled him from the Communist Party and discharged him from the Army.

This was a setback, no doubt, but not the end of the cybernetics project. The torch was taken up by Victor Glushkov who was by that time the Director of the Institute of Cybernetics in Kiev. In the 1960s he submitted some proposals for setting up computer systems to the relevant ministries. Not much happened. But his opportunity came towards the end of the 1960s, when the Soviet leadership became aware of the American ARPANET program. They were happy to receive proposals. Glushkov submitted his most ambitious plan, for an All-Union Governmental Automated System, or OGAS. The main opponents were the ministries, and two powerful governmental agencies, the Central Statistical Administration and the State Planning Committee. Neither of them were happy with Glushkov’s plan. They were both afraid of losing influence.

Glushkov was much better at keeping the bureaucrats on his side than Kitov. He was not in danger of losing his job. On the contrary, he was showered with medals and decorations. Among others he received the Order of Lenin, the Order of the October Revolution, the Lenin Prize in Science and he was elected a member of the Soviet Academy of Sciences at the age of 40. The Institute of Electrical and Electronic Engineers in the US also acknowledged his contribution (posthumously) to digital automation of computer architecture by granting him the Computer Pioneer Award.

So what happened to OGAS? The plan was watered down to the extent of losing its original aim of creating a single unified management system. It was in nobody’s interest to set up a unified system with universal computers. The main culprit was the Ministry of Defense. Every type of weaponry was controlled by specialised computers, each one separately programmed just for that purpose. Its whole system was the antithesis of compatibility.

Why did the proposals of Glushkov for a unique Soviet computer network fail? The mind-boggling bureaucracy was his worst enemy. A further obvious obstacle was the lack of any reliable and accurate data. In fact, collecting and publishing data was a dangerous business. The results of the 1937 census found that the Soviet Union had an unnaturally slow growth of population. These results were never officially published. They were suppressed and those responsible for collecting the data were arrested for “crude violations of the principles of statistics.”

The USSR could have had its own internet — but attempts at setting up a network of computers would have been alarming to senior officials who wanted shield their inefficient departments from oversight. And aside from anything else, the Soviet Union had a lousy telephone network.

missile gap The internet The soviet union The West