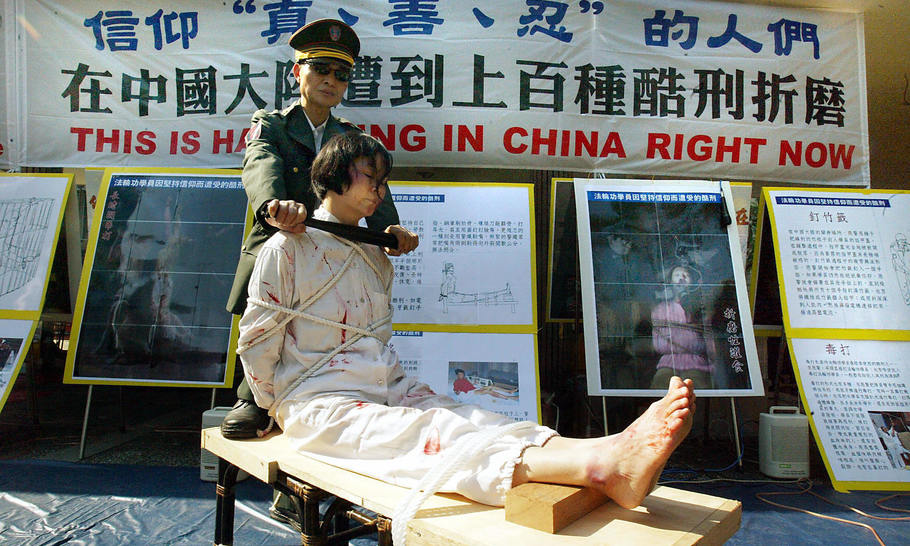 Organ transplantation is a lucrative business in China. Officially, about ten thousand operations are performed annually, but this is probably an underestimate as capacity in hospitals registered by the Ministry of Health is over 60,000. Anecdotal reports from transplant units suggest that as many as twenty operations are performed daily, and often during the night. Vital organs such as kidneys, livers and hearts are available within days, if not hours.

This apparent abundance is quite unlike the waiting times in other countries, and beyond the supply that could be expected from the Chinese donor system, which started a few years ago.

So, what’s going on?

The answer is alarming. According to a hospital worker in Shenyang, up to 4000 adherents to Falun Gong, a Chinese spiritual movement, have been killed for their organs. Her husband, a surgeon at the same hospital, had removed corneas from 2000 living Falun Gong practitioners.

This revelation was supported by undercover enquiries with doctors in twelve provinces by David Kilgour and David Matas. Published in 2009, their book The Bloody Harvest: the Killing of Falun Gong for their Organs was followed in 2014 by damning evidence gathered over seven years by investigative journalist Ethan Gutmann, culminating in the book The Slaughter: Mass Killings, Organ Harvesting and China’s Secret Solution to its Dissident Problem. Nominated for the Nobel Peace Prize, Kilgour, Matas and Gutmann have played a leading role in alerting the West to the organ harvesting scandal.

China denies use of Falun Gong practitioners for forced transplants. In 2015 it stopped using executed prisoners for organs; instead, death-row prisoners ‘voluntarily’ donate and are registered on the national donor programme, a move which has been described as a semantic trick.The law was not changed, and anyway the World Medical Association decrees that ‘in jurisdictions where the death penalty is practised, executed prisoners must not be considered as organ donors, because consent cannot be fully free from coercion.

China has been dissecting executed prisoners since transplant operations began several decades ago. Unlike recidivist criminals, Falun Gong practitioners provide a reliable source of high-quality bodily parts due to their healthy, self-cultivating lifestyle. Intricate medical examinations are performed on Falun Gong prisoners not for their own health, but to screen and match their organs for transplant patients. A prisoner’s death is then timed by the need for an organ. Reverse matching is explained in a testimonial for the film Hard to Believe by Wendy Rogers at Macquarie University: ‘Wealthy recipients are matched against a large pool of prisoners, with the best matched prisoner scheduled for execution at the convenience of surgeon and recipient’.

Gory details of the harvest, akin to a 19th-century gothic horror, have been revealed by doctors who practised in China. In Ethan Gutmann’s book, The Slaughter, Enver Tohti recalled his experience of organ plunder in 1995. Two chief surgeons ordered him to assemble a team for multiple surgery on the next day, when he and colleagues were taken to a site outside the hospital. After hearing gunshots they were taken into a yard where a man was lying on the ground. The surgical team was instructed to remove the liver and kidneys. Yet the man was still alive, as revealed by his reaction to the scalpel. This was no mishap: to minimise ischaemic deterioration and thus boost the prospects of successful transplantation, organs are taken from living donors. According to Huige Li at the University of Mainz, execution is performed incompletely, such that condemned prisoners are actually killed by the surgeon.

The public is blissfully ignorant of the provenance of these fine specimens, but neurologist David Nicholls called for a coroner’s inquest. The American exhibitor, Imagine, denies any illegality, but these are ‘unclaimed’ bodies sourced from the police in Dalian with no record of consent or cause of death.

Lord Alton of Liverpool demanded a government enquiry, and an open letter by several politicians, scholars, clinicians and others (including myself).to Prime Minister Theresa May raised grave concerns about the exhibition.

Do scholars and administrators involved in Chinese ventures know about organ harvesting? Perhaps we should give the benefit of doubt. Lecturers in any field will surely know of the subjugation of Tibet. Some may have heard of organ removal from prisoners, but with little mainstream media coverage they may lack awareness of the continuing abuse. However, a primary purpose of the university is to nurture enquiring minds and critical thinking, and reports of organ harvesting are not hard to find. Universities that develop close links with Chinese institutions should be expected to ask questions on ethical governance, particularly in fields such as medicine, nursing and law.

The European Union passed a resolution in 2013 for member states to raise awareness of organ transplant abuses among citizens travelling to China. A similar resolution was passed in 2016 in the USA by the House of Representatives, which demanded the release of all prisoners of conscience. Ethan Gutmann, at a meeting in October 2018 in the Houses of Parliament, condemned the complicity of governments, NGOs, and medical and educational establishments. There is no longer an excuse for not knowing what is happening with Falun Gong and other oppressed Chinese minorities. At this meeting the International Coalition to End Transplant Abuse in China announced an independent people’s tribunal into the scandal

Normally keen to promote their role in global citizenship, many universities have shown moral failings in their relationships with China. Apparently, universal values have been replaced by moral relativism, but not in a way that protects the vulnerable. Academic visitors to China should not necessarily abandon their collaborative projects, but they should at least examine their consciences.