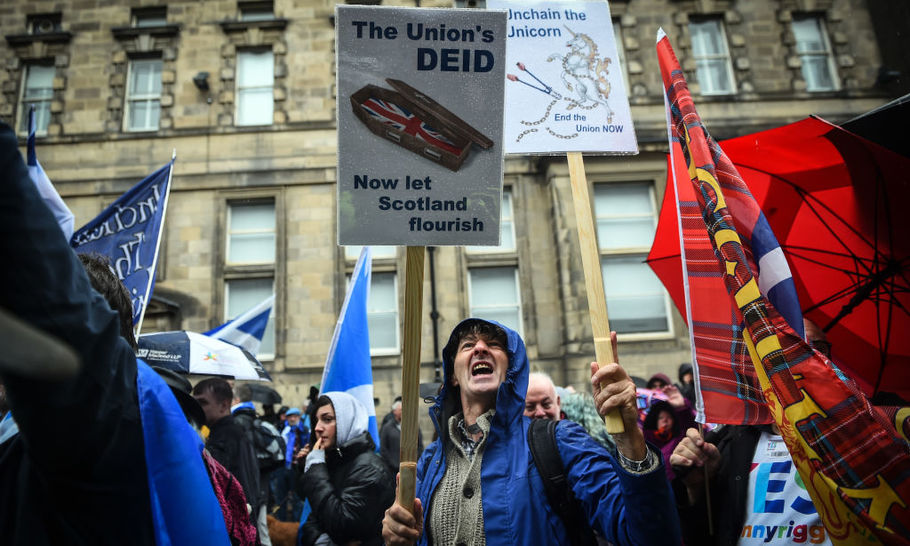 The British government wants the power to ditch the bits of the Brexit Withdrawal Agreement it doesn’t like. This has brought fire and brimstone down on its head. Five former Prime Ministers, including three Tory ones, have come out in opposition. The US Presidential candidate Joe Biden has warned that messing around with the Good Friday agreement will jeopardise a UK-US trade deal.

And just in case we didn’t get it, Number 10 put up Brandon Lewis, Secretary of State for Northern Ireland, in the Commons to say that, yes, the government did want the powers to break the law “in a limited and specific way”. It was doing this to protect the integrity of the UK and could the House see its way to giving this ploy its blessing.

This is Boris Johnson and Dominic Cummings acting out their role as the bad boys of British politics in technicolour and surround sound. Johnson appears to be climbing down somewhat in an attempt to head off a Tory rebellion over the controversial new powers. He now says that these would only come into effect with the backing of the Commons. Or to put it differently: “I’ll only break the law if you do too”. This did not prevent Richard Keen, advocate-general for Scotland and senior Conservative from resigning yesterday.

But all this furore has diverted attention from the equally far-reaching and in some respects more serious aspects of the Internal Market Bill: a significant change to the powers of the UK’s devolved nations.

The overarching political objectives of the Bill are now clear. These are: 1) to sever as many ties and obligations to our European partners as possible; 2) to claw back powers from the devolved nations while claiming this will strengthen the Union; and 3) to allow central government to make regional investments where these would yield the greatest political returns.

The first of these aims is fungible. Whatever the outcome of the talks with Brussels, Britain will need some kind of working relationship, some understanding with the 27 to continue trading. British business incessantly tells the government that it needs certainty. Tory coffers depend on British business. Even a Prime Minister who said “f*** business,” understands that.

So we need to look at points 2) and 3). There is a huge irony in the new Bill. We’re leaving the Single Market because we don’t like being told what to do, what to eat or how to live our lives. We want the freedom to set our own standards.

But the Single Market and its impositions — the so-called Acquis Communautaire — is being replaced by something very similar and equally doctrinaire. The principle of “mutual recognition” that governs the sale of goods and services within the EU will now be applied to the UK.

The effect of this will be to concentrate more powers and patronage in Whitehall, while removing significant powers from devolved governments, powers they now have under EU law. Edinburgh, Cardiff and Belfast will no longer be beholden to Brussels. Instead it will become more dependent on Whitehall.

The first power to be removed will be ability of the devolved nations to set their own standards for goods and services. Under EU law, Scottish standards can be applied to goods sold in Scotland. This goes out of the window under the Internal Market Bill.

Instead, the principle of “mutual recognition” is imported wholesale from the single market. This states that goods and services sold or used in one part of the Union can lawfully be sold or used elsewhere within the UK.

Take orange squash. Scottish law requires that squash sold in Scotland has fewer additives than squash sold in England. Under EU law, which favours higher standards, that’s admissible. But in the new UK internal market the principle of mutual recognition will apply.

Number 10 insists this is fair and will make trading across the devolved nations seamless. It also says it will not allow a “degradation of food standards”.

Devolved governments say this is a power-grab. They also worry that in the event of a trade deal with, say, the US they will be powerless to stop imports of lower quality products flooding their shelves.

This is a legitimate concern. To be successful, a trade deal with the US will require deregulation. American trade negotiators have made it clear they regard unnecessarily stringent standards as “trade barriers”. Liz Truss, the Trade Secretary who is leading the talks, is an arch-deregulator. Draw your own conclusions.

The second big change is outlined in section 46 of the Bill, which covers state aid. Currently EU structural funds intended to help less prosperous parts of Europe go directly to the UK’s regions from Brussels. Under the new arrangements, instead of being handed directly to the devolved nations to spend as they choose, the new “shared prosperity fund” will largely be in the gift of ministers in Whitehall.

Between 2014-2020 these amounted to over £13 billion. In Wales, for example, many town centres in the valleys have been given a new lease of life with EU funds administered by the Welsh government. Wales can now set its own priorities according to local needs. This will change fundamentally and the temptation for Westminster to play pork barrel politics will prove irresistible.

Nicola Sturgeon has called the post-Brexit bill a “full frontal assault on devolution”. Senior Welsh government figures have accused London of “ sacrificing the future of the Union by stealing powers from the devolved nations”.

This sets up the possibility of an almighty confrontation between London and the devolved nations, especially Scotland. It is hard to see how this will not end up in the Supreme Court. It is equally hard to avoid the suspicion that this is what Dominic Cummings and Boris Johnson want: to draw the SNP government out into open ground to fight a battle they think they can win.

There is a broader point to all this. Britain is a country at odds with itself, divided over race, over immigration, over Brexit, over social justice. The government’s shambolic handling of Covid has prised these differences further apart. The pandemic has underscored glaring inequalities. There is a yearning for more, not less, diversity; for greater focus on local enterprise and local solutions to the lives of ordinary citizens.

A post-Brexit, post-Covid Britain will need its nations to feel empowered, to feel they have a real stake in their future. Instead, they face impositions from London.

Brexit was voted down by a hefty majority of Scots in 2016. Two years earlier Scots also rejected independence from the Union by 55 per cent to 45 per cent. The latest YouGov poll points to the largest ever lead for the pro-independence side: 53 per cent to 47 per cent. This is not good news for unionists.

Boris Johnson won power largely by appealing to English nationalism. He seems to believe that he can use that power to quell nationalism north of the border. Nationalism (as opposed to national pride) is a dead end. To lead, you also have to cooperate. This bill does nothing to achieve that. It merely steers Britain closer to a calamitous fracture.