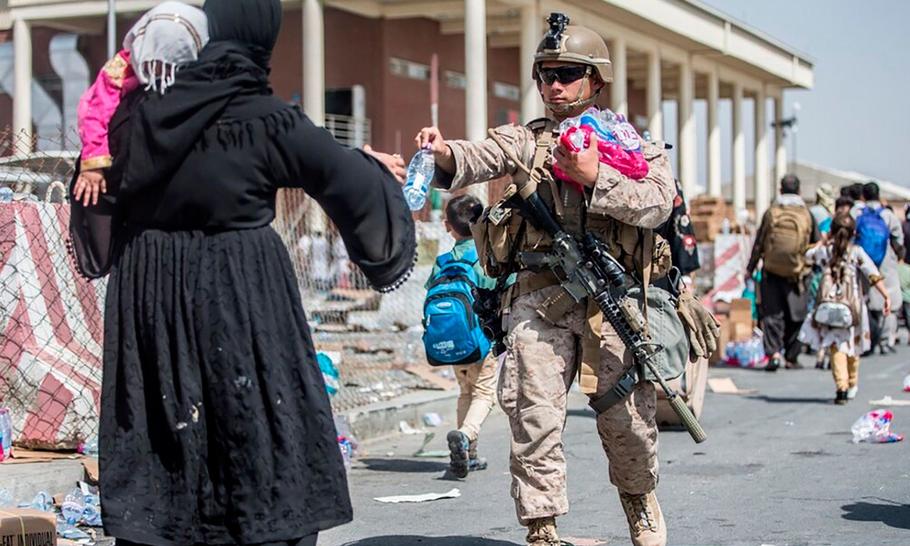 We are impotently watching Afghanistan sink into dark times, unable to save so many desperate people who are afraid for their lives. This week I witnessed heartbreaking scenes playing out in a Feltham community centre on the outskirts of London. The Afghanistan and Central Asian Association office was crowded with British Afghans, trying to rescue brothers, sisters, wives, children, husbands, cousins, mothers, and fathers back home. It would take the hardest heart not to want to allow all these trapped people a safe haven.

Mohammed Soltani arrived at ACAA at 5am. He hoped to get help for his cousin, a British citizen, who had gone back to Kabul to visit his sick father nearly a year ago. His cousin received an official email from the Foreign Office telling him to go to the Hamid Karzai airport. For three days and nights, he and his extended family camped out before being able to go inside.

And then Mohammed’s cousin had to make the impossible decision. Leave, and return to the UK. If he did that, he would have to abandon his old father, who did not have the necessary documentation to enter the UK. If he stayed to be with his family, he had to hope he would get lucky, which was unlikely.

“The UK Army kicked them out. He was outside and called me asking me to please do something,” said Mohammed, who added that the Taliban take videos of anyone who leaves the airport. “My cousin was beaten by them.” Mohammed shows me a video of a man with blood dripping down from his head. “Then,” says Mohammed, who works as an Uber driver, “these people appear at their homes later or the next day.” He says the Taliban went to the house, but they got the wrong address. “Instead, they killed the neighbour because they thought he worked with the UK Army. My relatives are in serious trouble.”

The family started Star School Education, which taught English to children. Not only does that compromise them, but so does being Hazaras, who are Shias. This third-largest minority group in Afghanistan rightly fear the hardline Sunni Islamists, who target them. “We can’t hide because we look different,” he says of his Asiatic features, which are said to come from the descendants of Genghis Khan, the founder of the Mongol empire.

“There is nothing to do except wait for the Taliban to kill them because the Taliban find out everything so easily. They know [my family] work with the United Kingdom and that we live here. We are here and unable to help.”

Like thousands of others, Mohammed went to the ACAA centre, which is very active on social media, because he heard they were helping Afghans. On the ground floor, rows of men and women sat waiting for their numbers on the green raffle ticket to be called, which would permit them to go upstairs. Volunteers help Afghan-British citizens fill out official documents to send to the Ministry of Defence, the Foreign and Commonwealth Office and Home Office.

“As soon as Kabul fell, people just started turning up,” said Shabnam Nasimi, a British-Afghan social activist and political commentator. She is the Executive Director of Conservative Friends of Afghanistan. This group exists to promote understanding and support for Afghanistan in the United Kingdom. She arrived as a child in 1999 with her family. Her father literally fell out of the back of the fridge container. He fainted when immigration officials opened the door. They were smuggled in from Europe and immediately claimed asylum, so they have a first-hand understanding of the Afghan diaspora’s problems.

“Most of the cases that come here are very complicated,” says Nasimi, “and they assume their whole family can leave, which is not the case.” Her father, Dr Nooralhaq Nasimi, his wife, two other daughters and their son work at the centre, which he opened in 2001. The Prime Minister acknowledged her work in successfully campaigning to get 35 Chevening scholars out of Afghanistan. Dr Nasimi won the Queen’s Award for Voluntary Service in 2018.

To help, a caseworker from Seema Malhotra’s office, the Labour (Co-op) MP for Feltham and Heston, was there, as was a lawyer doing pro bono work.

There was a large pile of donations, clothes and books and toys, and more people waiting outside. Dunya and Farida, sitting on a bench in the intermittent sunshine, said their family couldn’t believe how quickly Kabul fell. Farida left Afghanistan 20 years ago and had worked with the UN and other NGOs in Kabul. She was worried about her daughter, the technical and vocational education minister in former President Ashraf Ghani’s government. Nadima Sahar had already received warning letters from the Taliban and had gone into hiding before the Taliban raided her house. A day after we spoke, she was found safe in the US. Farida’s brother, who provided Sahar’s security, is still in hiding.

In the corridor, a woman is crying, wiping away her tears, and comforted by a young man, her son, Hamed, and her husband, Reza. They, too, are Hazaras. The family is desperate to have their son and daughter in Kabul join them in London. Reza, who came to the UK five years ago, speaks to his children every hour every day until 3am. “I can’t sleep since the Taliban came,” he says. “My son and daughter say please take us out. I’m scared, and I can’t do anything. Someone was killed on our road. My children won’t go out, and they don’t know where to go.”

They are hiding with friends. Zara, who speaks little English and has been here since April, makes a gesture with her finger across her throat. “The Taliban is two-faced,” says Reza. He says they cannot be trusted. Reza remembers the last time the Taliban ruled Afghanistan and thinks this time it will be even worse. “It was very bad. My son, who is with us, grew up with freedom and education, just like everything they have in the UK. There is nothing left to say. Everything is in the media. What they are showing is true.”

Another woman from Samangan tells how the Taliban are demanding money and insisting women wash their clothes and feed them. Everyone is just watching the news. There are more stories of the Taliban taking over houses to use as military bases, also beating people up. People have gone underground, changing locations at night, worried about being traced by the Taliban if they use their mobiles. One woman talked about her father being rifle-butted and saying, “It’s not so bad. We think this because we have seen women shot in the head and watched children have their throats slit.” Even the people smugglers are too scared of the Taliban to work.

It’s these stories that made Rebecca drive an hour from her home to volunteer. She likened the harrowing experience to what it must have been like trying to help the Jews who wanted to leave Nazi Germany. The Afghan refugees’ plight has parallels to what became known as the “voyage of the damned”. The German ocean liner, St Louis, set off in 1939 with 900 Jewish refugees seeking refuge in Cuba, the US and Canada. They were denied entry at every port and forced to sail back to Nazi Germany.

That sense of false hope pervades the centre, as we know most of those in Afghanistan will be stuck. After the terrorist attack on 26 August at Kabul airport, the 31 August deadline looms. Then the borders will be sealed, and Western countries will have completed their missions. While we don’t know for sure what will happen, it’s difficult to believe the Taliban will be any less violent. Ministers here have warned that “people will be left behind”.

Those of us who know Afghanistan can only ask what the past 20 years were about if this is where we have ended up. It’s a complex country in a complex part of the world, with actors internally and externally: Americans, Indians, Pakistanis, Iranians, Russia, China . It’s a long list.

I wrote an article about Afghanistan almost a decade ago when I was there, and one quote from a wise young man has always stayed with me. When I asked him about change in Afghanistan, he told me that “maybe in 200 years things would be different.” Maybe he was right. “My heart is painful,” says Mohammed, the Uber driver. So are ours. Our hearts are broken too.