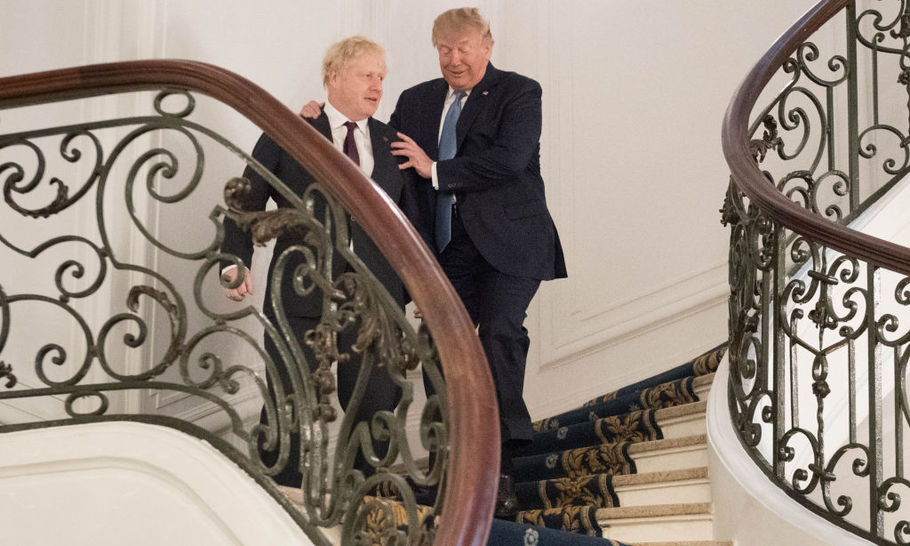 On both sides of the Atlantic, we are seeing two very different kinds of politicians in action.

In the United States, Donald Trump presents himself daily as ever nastier, ever more narcissistic, and moving ever closer to a position in which he will only accept the outcome of the Presidential election if he wins it.

In his virtual speech to the US Democrats’ Convention, Barack Obama gave us a reminder of a different kind of President. Obama was not perfect. No President ever has been, not even Abraham Lincoln, certainly not Bill Clinton, who joined Obama in speaking out in support of Joe Biden and against Trump, as Biden was formally adopted as the Democrat’s candidate for November’s election.

It cannot have been easy for Obama to watch Trump trash him, trash his record, trash established norms, trash America’s reputation in the world. But he has, by and large, kept his counsel, following the maxim of his wife Michelle, that “when they go low, we go high.”

Even in his critique of Trump there was an eloquence, and an understatement, that are both foreign languages to his successor: “I have sat in the Oval Office with both of the men who are running for President,” he said. “I never expected that my successor would embrace my vision or continue my policies. I did hope, for the sake of our country, that Donald Trump might show some interest in taking the job seriously; that he might come to feel the weight of the office and discover some reverence for the democracy that had been placed in his care.”

“But he never did. He’s shown no interest in putting in the work; no interest in finding common ground; no interest in using the awesome power of his office to help anyone but himself and his friends; no interest in treating the presidency as anything but one more reality show that he can use to get the attention he craves.”

“Donald Trump hasn’t grown into the job because he can’t. And the consequences of that failure are severe. 170,000 Americans dead. Millions of jobs gone. Our worst impulses unleashed, our proud reputation around the world badly diminished, and our democratic institutions threatened like never before.”

People’s motivations for going into politics are complex. They tend to be a mix of personal and political, but most politicians believe that they can play a role in making life better for other people. Clinton was definitely in that mould. I remember a meeting at the White House, when he and Hillary had invited a number of New Labour ministers and advisers to join them and Tony Blair in a policy think-in about the future. Everything he said was punctuated with questions and answers about the impact on struggling families in Arkansas — the kind of family in which he grew up.

Obama was perhaps more susceptible to the charge of elitism than Clinton, but he too was overwhelmingly motivated by a deep-seated belief in public service. In virtually everything Trump says and does, it is all about him.

But take a look at Obama’s three paragraphs above. Change Trump to Johnson, delete the word presidency and insert premiership, and every word could apply to Boris Johnson.

We are back to the question of motivation. When Johnson gets up in the morning, what drives him? His own interests, or those of the country and the people who live in it? Of course his own interests must have a place in any calculation. That applies to everyone. Even Mother Teresa would occasionally worry about her lunch, or where she would be sleeping. But where does the balance lie, between self and service? That is what we need to ask of our public figures.

I freely admit to a bias against Johnson, someone I have known for a long time and whose competence and character I have always felt were in question. So I won’t give my own answer. I ask you to reflect on yours. To consider whether his role in the EU referendum was motivated more by a genuine belief that Brexit was good for Britain, or a calculation that his pivot to being a Brexiteer was good for his positioning inside the Tory Party? To ask whether he took the threat to the nation’s health from coronavirus as seriously as he should, given the position he held? To ask whether his invisibility during the exams crisis is a sign of his commitment to delegation to an excellent team of ministers, or part of a pattern of laziness and a lack of attention to detail?

Just take a guess as to which of these two things concerns him more — the fact of the pain and inconvenience young people and their families have been put through, or the hope that it will all be forgotten by the time he seeks re-election? I have no doubt about the answer.

I don’t begrudge the guy a holiday, though he does seem to take an awful lot of them. But I do resent his indifference to the consequences of his policies on people’s lives and livelihoods, and I resent his, Michael Gove’s and Dominic Cummings’s belief that responsibility is something for lesser mortals.

I now present another sort of politician — Andy Burnham, Mayor of Greater Manchester. You do not have to know him as well as I do, you merely have to look at his face, his twitter feed and his public statements, to see a man genuinely worried about the impact of Covid on places like Oldham, and desperate to do what he can to help them. You see a man who once held Gavin Williamson’s current post, but, unlike Williamson or Johnson, you see a man who is genuinely feeling the pain of those young people whose lives have been messed up by the chaos for which this government is responsible.

It is often said that “all politicians are the same.” They are not. There are good and bad. The tragedy for the world is that at a time the world needs the good politicians, the bad ones are in charge. Ask yourself, on a scale of one to ten, how much do Donald Trump or Boris Johnson care that Russian opposition leader Alexander Navalny appears to have been given a taste of Vladimir Putin’s Salisbury medicine? My guess is somewhere between zero and one.

Biden isn’t perfect either, but he is motivated by the interests of other people — and for that, I would take him over Trump any day of the week.