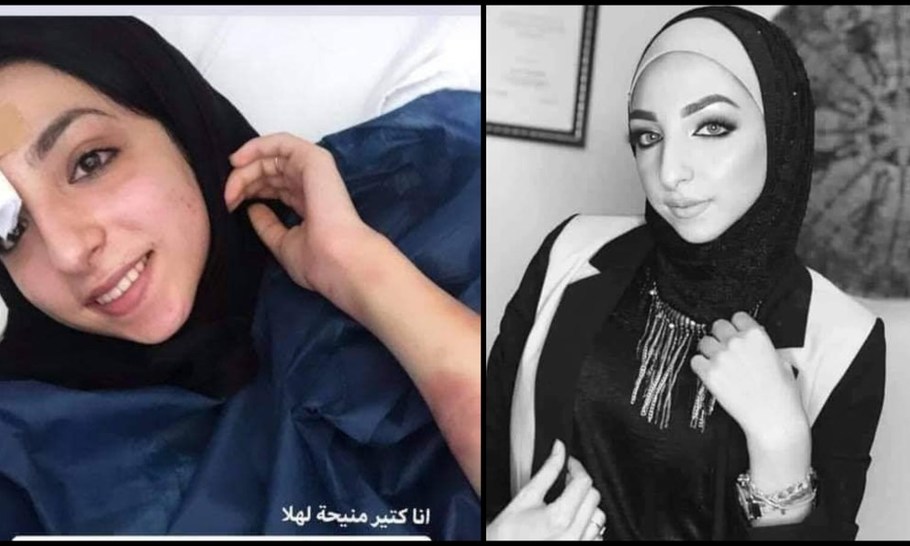 The battering to death of Israa Ghareeb, a 21-year-old Palestinian woman, at the hands of her family is causing outrage across the Arabic-speaking world. Activists and the youth are taking to social media to share their anger towards “honour” culture that seeks to “protect” the family name – even by a sickening murder. Across Twitter, Facebook and Instagram the hashtag “We are Israa Ghareeb” has gone viral and is being used by activists in Jordan, Lebanon, Egypt and Palestine to raise awareness of honour violence.

Israa, aged 21, died last Thursday, beaten to death by her family. Her “crime”, sharing a selfie in which she appears publicly with her fiancé before their wedding ceremony. The case is currently under criminal investigation. However, Israa’s friends have publicly shared screenshots of their Whatsapp conversations where she asks for “justice to be done against her oppressors”. A disturbing video of Israa screaming for the police and in pain as she is abused in hospital, is appearing on Twitter, Instagram and Facebook. Pictures taken by Israa showing her injuries in hospital have also been posted on social media.

Israa’s ordeal began after her cousin is reported to have brought her “Selfie” to the attention of her father and brother. Her Canadian brother, Ihab, is said to have agreed that it brought “dishonour” and that something ought to be done to restore the family honour.

Her father and brothers have been accused of beating Israa so badly that her spine broke. Her family are reported to have claimed she had a “jin” (an evil spirit) and her injuries were caused by being possessed. From hospital the young aspiring make-up artist updated her clients that she was unwell and unable to work for a period. She also shared with friends on social media that she had been beaten.

In hospital her visiting brother attacked her again. The family dispute that her brother beat her in hospital claiming she was visited by a Sheikh to perform an exorcism to remove the “Jin”. However, that does not explain the disturbing audio of her prolonged and piercing screams.

The audio is reported to have been recorded by a doctor or nurse. One nurse has said:

“If someone was able to record this attack could they not have done something to prevent it? We sign an oath to not allow harm to come to patients, this must be investigated.”

Israa then returned home, but was later found dead, apparently having suffered a stroke.

The head of the governorate, Mohamed Ishtaya, has stated that “we must strengthen the system of protecting Palestinian women.” There is hope that this could mean reform to the Jordanian penal code that allows for the shortening of sentences in murder cases in “extenuating” circumstances.

Protest that leads to change in the Palestinian Territories is not unheard of. In 2011 the killing of a popular 20-year-old university student, Aya Baradiya — she was thrown into a well in Hebron and left to die by an uncle who disapproved of her suitor — resulted in protests. President Mahmoud Abbas then annulled a law dating back to Jordan’s occupation of the West Bank that allowed sentences of no more than six months for “honour” killings.

The ADWAR (Palestinian Family Planning and Protections Association) commented: “The biggest problem facing women in Palestinian society is that there is little law to protect them, especially as it is still based in the discriminatory Jordanian Penal Code. We believe that the issue of killing women has recently been increasing in our Palestinian society because of the absence of the law.”

There is very little useful data on “honour” crimes in Palestine. The Washington Post reported in 2013 that 27 women were thought to have been killed in the West Bank and the Gaza Strip by family members claiming reasons of  “honour” — more than double the 13 cases documented in 2012. The Women’s Centre for Legal Aid and Counselling, reported 27 cases in 2014, and 15 in 2015. Despite an apparent dip in cases in 2014 and a lack of data thereafter, there is a perception that there is an upward trend over the last decade.

The brutal and apparently fatal attack on Israa has caused Palestinian youth to come together and, by collectively paying their respects to this young woman, make a stand against “honour” crime. Too many blind eyes in the Palestinian community have been turned for too long to this barbarity. Sahar AlKawasmeh, director of ADWAR, often pushes for legal change to improve women’s rights and makes frequent requests directly to President Abbas. But the response is often: “This is not our priority right now. Our priority is Fatah, Hamas and Palestinian statehood.”

“Palestine is too focused outwardly on its relations with Israel, so that it forgets the rights of its people and does not build a just life for citizens in the here and now.”

“We will live our whole life here with attention given entirely to a war whilst other problems are neglected.”

The multitude of young Palestinian voices outraged at Israa Ghareeb’s death understand that there is nothing honourable about “honour” crime. Attention from the governorate could mean that this case has ignited much-needed pressure to tackle honour culture in Palestine, and focus on the needs of the Palestinian community beyond that of the conflict with Israel.