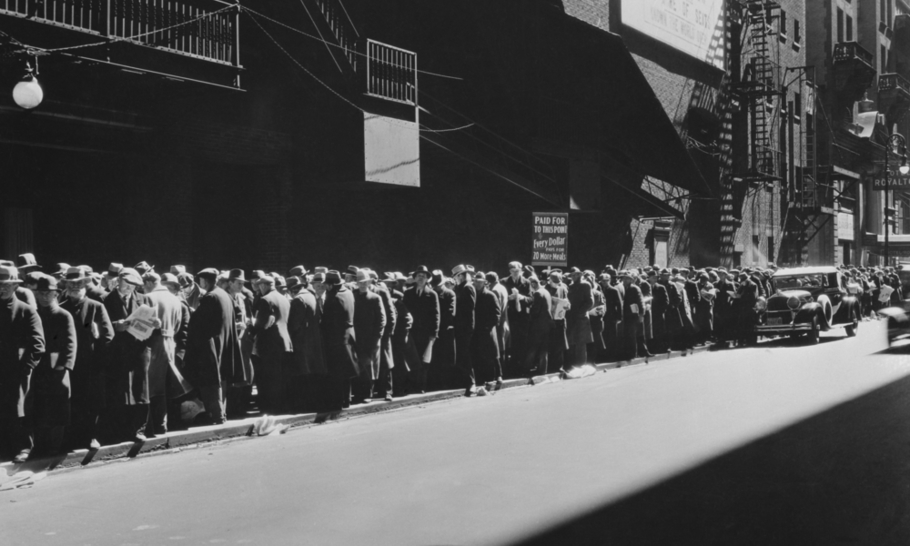 It is unequivocally grim. In the US, the weekly count of initial claims for unemployment benefit showed that 30 million people had filed in the six weeks to 25 April. This wipes out the 23 million jobs created in the 11 years between February 2009 and the same month in 2020. By June, the US unemployment rate could be 20 per cent, compared to 3.5 per cent in February, and double the post-Second World War peak recorded in 1983. In the UK, the unemployment rate is predicted to rise above 10 per cent this summer, a level not seen since the early 1980s.

Consumer and business sentiment measures are in freefall in the northern hemisphere, and the contagion into emerging and developing countries is growing. In western countries, GDP fell sharply in the first quarter, but the current quarter’s contraction will be much bigger, ranging between 15 and 35 per cent. Service industries, normally a stabilising influence in downturns, will be especially badly affected.

As people are physically unable to consume as before, savings are exploding. In the US, the household savings rate in March shot up from 8 to 13.1 per cent, the highest for 39 years. British households and businesses increased their bank deposits by over £57 billion in March, the largest monthly rise ever recorded and eight times as large as the average over the last six months. The corollary of higher private savings is an explosion in government deficits and debt to the highest levels we have seen in peacetime. Public debt to GDP ratios in excess of 100 per cent, until recently the preserve only of the likes of Japan, Italy, Greece and Ireland, are likely to become commonplace.

Can these trends get still worse? The short answer is yes.

We might end up, as some economists warn, in a protracted depression. If so, our system of democracy, and even peace between nations might be at risk. Autocrats in several countries — not just in China and Russia — have already used the pandemic to consolidate power, and others might succumb to autocracy if the veneer of tolerance in our societies were to crack. Further, just consider how Covid-19 has opened up a new front in Sino-Western tensions, as “blame” and mutual recriminations have undermined what little is left of trust relations. We are not short of triggers in Sino-Western relations.

Yet, reading some of these Cassandras, I think they are flirting with economic horror clickbait. Telling the public things are dire isn’t news, discussing with them what we might do about it is. The most important issue, of course, is to get the balance right between bad economic and bad epidemiological outcomes. And bear in mind that unlike the 1930s, can anyone seriously imagine central banks and governments today reversing expansionary policies?

Fundamentally, we must hope that governments continue to exercise caution as they ease lockdown restrictions so that they can manage both the economy and keep the infection contained. To do this they will have to adopt or approve widespread use of masks, testing and contact tracing while anti-viral treatments are being developed, and hopefully an effective vaccine.

As several European countries, including the UK, and some US states join the throng to ease restrictions, the path ahead is undoubtedly a tricky one. Re-open the economy too fast, and there’s the risk of a new wave of infections and fatalities leading to overwhelmed health services, more lockdowns, greater economic harm and popular unrest. Re-open it too slowly, and you run the risk of permanent economic damage and popular non-compliance.

All of this makes a V-shaped economic recovery a risk, rather than a base case, though the IMF for example, has precisely such a central scenario. It predicts that in the UK, for example, a 6.5 per cent fall in GDP this year will be followed by a 4 per cent rise in 2021.

Let’s hope they are right, but I wouldn’t hold my breath. If we look to China, as it is about six to eight weeks ahead of us. The streets, subways and planes are fuller again, children are at play, parents seem relaxed, production is up, but shops, restaurants and buses are largely empty. Barely anyone goes to cinemas, which remain mostly shut.

We might get a better 2021 but it might take a while to get back to the level of output and demand we enjoyed at the start of 2020. The ECB’s Chief Economist, Philip Lane, recently said it might take three years to get back to where things were. Hopefully, it will come sooner.

How so? As I stated earlier, we are creating a debt pile up, which is bad news but not without caveats. It’s bad because recourse to debt is precisely how we have gotten out of every economic crisis since the 1980s. As things stand, UK public debt could rise by 15 percentage points to about 100 per cent of GDP in 2021. There are only three ways to deal with this, and two of them are off the table. These are default — in the sense of refusing to pay creditors, eg holders of gilts — and austerity, a policy which no political party wanting to be elected can now endorse.

This leaves a third option, which is the pursuit of financial repression and inflation. This is good news not because it is to be recommended, as such, but it gives us a way out, and suggests an end to debt dependency.

Financial repression is basically about keeping interest rates below the rise in the monetary value of GDP for an extended period. It’s in effect a tax on savers, and on wealth, at a time when we do not want people to save, and a subsidy to borrowers, debtors  and those on lower incomes who tend to consume more out of income. It would almost certainly be accompanied by policies to redistribute income to lower income groups, change the tax treatment of debt so as to discourage it, and to put wider controls in the economy, possibly also over the movement of capital. It’s a policy environment not seen since before the Thatcher era.

Once the grip of vicious deflationary demand conditions eases, we are likely to see higher inflation too, which is also good to reduce debt burdens. Direct monetary financing of the public deficit has begun in a small way already, and more will doubtless occur. We should also expect higher prices to reflect supply constraints in the economy of tomorrow. Think border controls, lower immigration, travel restrictions, shorter and dearer supply chains, “just in case” production rather than “just in time”, weak investment and the ageing society effects on labour and skill supplies.

It may not be pretty, but the alternative is much worse.