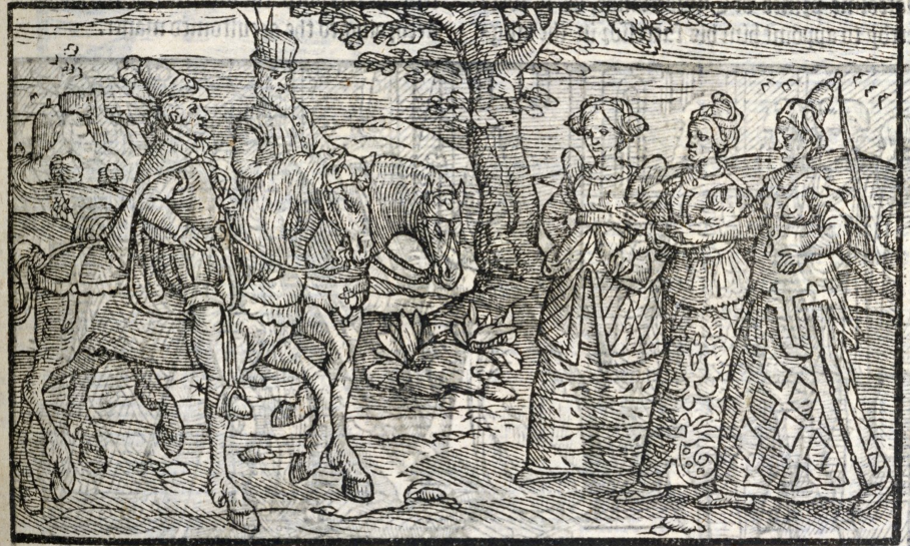 A picture of Lords meeting Ladies in the first edition of Holinshed's Chronicles of England, Scotland, and Ireland (1st edition 1577)

King James I of England, simultaneously King James VI of Scotland, had three things he badly wanted to cancel. The first was tobacco, against which he issued the first government health warning, in the sternest possible terms, in order to discourage smoking. The second was witchcraft, which attracted Draconian penalties from the monarch. The third was chess.

In his famous treatise A Counterblaste to Tobacco (1604), the King expresses his distaste for smoking the newly imported plant. He wrote:

“Have you not reason then to bee ashamed, and to forbeare this filthie noveltie, so basely grounded, so foolishly received and so grossely mistaken in the right use thereof? In your abuse thereof sinning against God, harming your selves both in persons and goods, and raking also thereby the markes and notes of vanitie upon you: by the custome thereof making your selves to be wondered at by all forraine civil Nations, and by all strangers that come among you, to be scorned and contemned. A custome lothsome to the eye, hatefull to the Nose, harmefull to the braine, dangerous to the Lungs, and in the blacke stinking fume thereof, neerest resembling the horrible Stigian smoke of the pit that is bottomelesse.”

He was also strongly opposed to witchcraft, after he was caught in a severe storm in the North Sea on the way back from collecting his regal Danish bride, Anne of Denmark. James laid the origins of that violent storm fairly and squarely at the door of Scottish witches, whom he proceeded to persecute without mercy, often relying on brutal torture to extract confessions. The principal witch-hunt took place in the notorious Berwick witch trials of 1590, a year after the storm. Indeed, between the years 1560 and 1700 up to 2000 Scottish “witches” were executed, compared with a mere 500 in far more populous England. Clearly, this massacre was not entirely of James’ doing, but the King’s writings and enthusiastic strengthening of anti-witchcraft legislation certainly ratcheted up the numbers of victims.

Here is a brief outline of the English Statutes against Witchcraft:

In contrast, James I and VI in his treatise Daemonologie (1597) writes:

“The Fearful abounding at this time in this Country of these detestable slaves of the Devil, the witches… Have moved me … to resolve … that the instruments thereof merit most severely to be punished.

What can be the cause that there are twenty women given to that craft, where there is one man?

For as that sex is frailer than man is, so is it easier to be intrapped in these gross snares of the Devil, as was over well proved to be true by the Serpent’s deceiving of Eva, at the beginning, which makes him the homelier with that sex.”

To publish one’s belief that women were more susceptible to Satan than men would now invite ridicule. But in the late 16th and early 17th centuries, the literal word of the Bible was held to be grounds for persecuting witches.

As for chess, James wrote, with all the bitterness of a man who has just been defeated over the board: “As for the chess, I think it over fond, because it is over wise and philosophic a folly. For where all such light plays are ordained to free men’s heads for a time from the fashious thoughts on their affairs, it by the contrary filleth and troubleth men’s heads with as many fashious toys of the play, as before it was filled with thoughts of his affairs.” This is from James’ tract called Basilikon Doron (1598) which means “royal gift” and was a treatise on government as advice to kings, written in the form of a private letter to James’ eldest son, Henry Duke of Rothesay.

Worse was to come. In 1624 the ingenious and prolific playwright Thomas Middleton (1580–1627) wrote his satirical drama A Game at Chess. This was unmistakably an anti-Spanish entertainment, which came at a particularly inconvenient moment for the King, since his second son and heir Charles (later Charles I), was seeking to pursue an unpopular marital alliance with a Spanish princess. The producers cunningly chose their moment to unleash the show. It was a play in which all characters were chess pieces, and one, the Black Knight, clearly identifiable as Spanish ambassador to England, Don Diego Sarmiento de Acuña, 1st Count of Gondomar, with his trademark anal fistula, cruelly portrayed on stage by the presence of his personal palanquin, fitted with all necessary 17th century mod cons. Just after James had departed for one of his lengthy hunting trips, A Game at Chess hit the stage and it took nine days (with a performance every day) for the Spanish embassy to track down the King and persuade him to ban the play. But those nine days amounted to a bumper run for the time.

Witchcraft gradually ran out of steam as a plausible excuse for stigmatising and despatching unpopular neighbours, and by the start of the 18th century, rationalism had begun to rule it out of court. As we saw above, the major anti-witchcraft act was repealed in 1736. The dawn of rationality was to be somewhat humorously observed in the case of one alleged witch, Jane Wenham:

“A warrant for Wenham’s arrest was issued by Sir Henry Chauncy, who gave instructions that she be searched for ‘witch marks’. She requested that she undergo trials to avoid being detained, such as a swimming test, however, she was asked to repeat the Lord’s Prayer. The accused was then brought before Sir John Powell at the Assize Court at Hertford on 4th March 1712. A number of villagers gave evidence that Jane Wenham practised witchcraft. The judge was clearly more sceptical than the jury at the evidence presented. When an accusation of ‘flying’ was made against Jane, as proof of her Satanic affiliation, the judge remarked tartly, that in England there was no law against flying!”

But a century earlier, witchcraft was not just a hot topic, but one in which the general populace sympathised with King James. His anti-witchcraft tract, Daemonologie, compiled from Biblical sources and the King’s own interrogation of the accused adherents of Satan, found its influence in Shakespeare’s Macbeth, where many of the spells and incantations pay homage to the King’s writings. As noted in an earlier column White Queen – Black Queen concerning Shakespeare’s play Henry VIII, the Bard could turn his hand with equal dexterity to comedy, tragedy and sycophancy.

A recent theory links Shakespeare (1564–1616), who mentioned chess specifically in both Edward III and The Tempest, not just with chess, nor the diabolical, but also with the divine. The surmise is that at the age of 46, Shakespeare also contributed clandestinely to the King James translation of The Bible (1604–1611). The coded clue lies concealed in Psalm 46. Now read 46 words into the Psalm and note the word which arises. Then go to the end of the Psalm and read 46 words backwards. I guarantee that you will be astonished. By the way, please ignore the double repetition of the word “Selah”, which is a liturgical/musical mark, and not part of the text.

The game this week is a win by Giaochino Greco (1600–1634) the chess virtuoso, who carried London by storm in 1623. Here is one of his wins in London in 1623. The Italian whirlwind may, indeed, have been the playwright Thomas Middleton’s inspiration for the use of chess in his play. Greco was lucky. When King James succeeded Elizabeth I in 1603, London would have been deserted by aristocratic sponsors (Greco’s lifeblood) and all theatres were closed because of the plague — a precursor of our own pandemic lockdowns. Twenty years later, the coast was clear of disease and Greco was even able to sell two manuscripts of his games to wealthy patrons. These still exist: one in the British Library in London, the other in the Bodleian, Oxford.

On a side note, in response to my previous column The Martial menagerie of King Alfonso the Wise , I described a woodcarving by Albrecht Dürer of a rhinoceros. A reader of The Article has now contacted me about a wine that they very much like called “Vürsù Barbaresco Valeirano by La Spinetta” which sports Dürer’s rhinoceros on the label (pictured above). I look forward to trying a bottle along with other La Spinetta wines. If any readers of TheArticle know of any other wines which have connections to chess or my columns, please let me know.

Raymond Keene’s latest book “Fifty Shades of Ray: Chess in the year of the Coronavirus”, containing some of his best pieces from The Article, is now available from  Amazon , and  Blackwell’s .