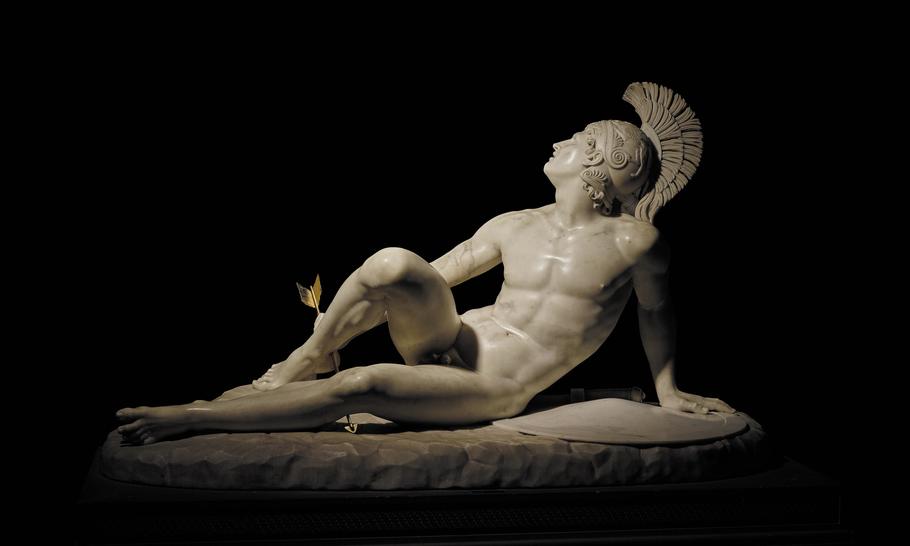 Before entering the spectacular new exhibition at the British Museum, visitors pass a sign on the wall offering a word of caution: “ ‘Troy: Myth and Reality’ tells a story about war. It includes depictions and discussion of violence and other aspects of conflict.”

It is a pointless trigger warning, and on two levels. For one, only those with an incredibly nervous disposition are likely to be shocked or sickened by the contents (and if truly faint-hearted or lily-livered then why come at all?). For another, everyone knows that Troy tells a story about war. As the exhibition’s lead curator Alexandra Villing puts it, the Trojan War was “one of the greatest stories ever told – about a war which has become an archetype for all wars”.

Troy is the ultimate Greek myth. It has endured for more than three millennia, inspiring countless artists and writers. It is a stirring tale of love and valour, violence and ruin, revenge and tragedy. The war that raged between the Greeks and the Trojans was not any old war: it was a decade-long war of attrition, which began with the abduction of the most beautiful woman in the world and ended with a ruthless massacre and wholesale destruction. Over the centuries experts debated whether the city that inspired Homer’s Iliad really existed, and searched in vain for its remains. It wasn’t until the late nineteenth century that the German archaeologist Heinrich Schliemann marked the spot in modern Turkey.

Almost a hundred of the treasures from Schliemann’s excavations are on display at the exhibition – the first of its kind in the UK for over 140 years. Some 300 objects in all are presented, from Bronze Age relics to contemporary art installations. Through them, we gain valuable insight into a vanished city and view in varying shapes and forms the key players in an epic tale.

Those players leave their mark. A ceramic amphora, or storage jar, dating from around 530 BC, shows the Greek hero Achilles attacking Penthesilea, queen of the Amazons. He is clad in shining black armour and his spear is about to pierce her pale and exposed throat. This is a brutal moment of truth: their eyes meet and he falls in love with her, just as he is snuffing out her life.

There are many more portrayals of Achilles as bloodthirsty marauder, cutting down those who get in his way. Now and again, though, we see him in less frenzied or more vulnerable situations. On one Roman fresco he waits calmly while the lame god Hephaestus forges new armour for him. In The Wounded Achilles, Filippo Albacini’s magnificent neoclassical sculpture from 1825, he sits stripped of that armour and clutching the fatal arrow embedded in his heel. On a drinking cup he bandages the wound of his comrade-in-arms – and possible lover – Patroclus. And in a Roman sarcophagus relief he appears bowed and broken as Patroclus’ body is brought to him.

There are even more representations of Helen of Troy. She is sweetness and light in Edward Poynter’s 1887 portrait, a winning combination of elegance, innocence and wide-eyed wonder. Antonio Canova’s exquisitely carved bust from around 1812, which comes complete with swan neck and cascading curls, captures the beauty and the serenity of the face that launched a thousand ships. A marble relief of the meeting between Helen and Paris, assisted by protective gods, shows a young flirtatious woman, her body turned towards his, and her arm draped around his shoulder. But Helen seems less in control in scenes that chart the next stage in her story, specifically her embarkation and departure to Troy. On a funerary urn she closes her eyes – blanking out her predicament, surrendering to her fate – as she and other plundered possessions are loaded onboard Paris’ ship. In a wall-painting from Pompeii she stares straight ahead, grim-faced, as a servant and soldier escort her up the gangplank.

Helen is a regular presence throughout the exhibition, but she dominates one particularly interesting section which focuses on the women of the Trojan War. In the literature of recent years, Pat Barker, Madeline Miller, Natalie Haynes and other novelists have successfully given a voice to the unsung heroines of Greek mythology. Here we come across a noble attempt to both articulate and amplify those voices further by way of art, artifacts and shared histories. Other sections take in the sack of Troy, the real-life search for Troy, and the adventures of Odysseus. Herbert Draper’s 1909 painting Ulysses and the Sirens, for example, arrests the viewer with its immense size, brute force and depiction of fear, temptation and raw physicality.

Visitors expecting a gigantic Trojan horse will be disappointed by a second-rate substitute in the form of an overhead arrangement of wooden ribs. Otherwise the exhibition delivers, both in terms of stylish layout and content so abundant that it could have proved overwhelming. However, we are kept stimulated and absorbed by the sheer variety of riches: the archaeological relics, whether pottery or bronze weapons; the bowls and vases, frescoes and mosaics, books and manuscripts, paintings and sculptures. There are also the scattered curios, such as the finely-crafted fifteenth-century Tuscan and Umbrian cassoni, or wedding chests, prestige presents for newlyweds, whose intricate panels come adorned with images of that ideal marital couple – Odysseus and his faithful wife Penelope.

Among the many choice quotes on the walls of each room is one from Catullus’s poem 68: “Troy the ill-omened, joint grave of Europe and Asia…” This exhibition shows how that grave gave life to an epic tale with resounding power and lasting value.

Troy: Myth and Reality is at the British Museum, London, until March 8.