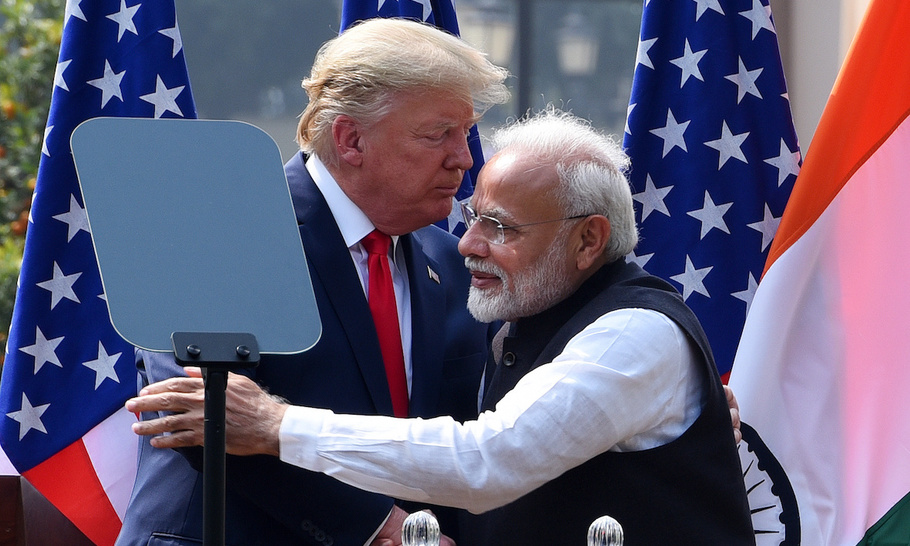 President Donald Trump stepped off a plane in Ahmedabad, India, on February 24, into the arms of India’s Prime Minister Narendra Modi.

Trump’s visit is, in part, an effort to break the impasse in trade negotiations between the two countries that have stalled in recent months. In May 2019, the Trump administration (in a move that has become increasingly regular) stripped India of a special status that exempted billions of dollars of its exports to the United States from tariffs. India retaliated in kind.

Negotiations up to this point have failed to reach even a “mini-deal” that would increase trade for focused groups of goods like dairy products, medical devices and Harley-Davidson motorcycles. Neither leader seems to be particularly concerned. Certainly, President Trump’s frequent public jibes are mainly reserved for the likes of Canada’s Justin Trudeau and France’s Emmanuel Macron, rather than “strongmen” like Modi.

The impasse that India and the United States find themselves in is illustrative of what happens when two populist leaders, suspicious of multilateral arrangements, attempt to reach a trade deal. Both leaders are popular with their grassroots bases for their commitment to protect jobs and fend off foreign competition. Neither can be shown to give an inch.

Trade tensions have not stopped the two leaders from making the most of the visit. Trump lavished praise on Modi on Monday as he addressed a rally of hundreds of thousands in Ahmedabad.

As the President praised Modi’s “democratic and tolerant” leadership of India, deadly protests engulfed the country’s capital, nearly 600 miles away. India’s new citizenship law, which grants amnesty to non-Muslim immigrants from nearby Muslim-majority countries, has fueled violence in New Delhi and other major cities. These have been joined by clashes between Hindu nationalist and communist groups holding pro- and anti-US demonstrations to coincide with Trump’s arrival in India.

Trump’s failure to mention the democratic backsliding that has characterised Mr Modi’s presidency is symptomatic of his tendency to embrace leaders he regards as strongmen in his own image, in spite of the controversy that comes with them.

Indeed, it is possible that Trump sees similarities between his own leadership and Modi’s. India’s citizenship law, which opponents claim discriminates against Muslims, is eerily similar to the American travel ban on those from selected Muslim-majority countries, which has drawn similar criticisms. Both, while controversial, have amassed huge support from each leaders’ base.

Trump appears drawn to world leaders that he calls “controversial,” and others call “anti-democratic” and “xenophobic”. When Trump met Viktor Orban, Hungary’s far-right prime minister, for example, he shrugged off complaints that the meeting essentially rewarded the erosion of democracy in Hungary that has taken place under Orban’s watch, instead congratulating the prime minister for a “tremendous job”.

On the world’s more overtly authoritarian dictators like Russia’s Vladimir Putin and North Korea’s Kim Jong-un, Trump has lavished similar praise. He famously called Putin a “terrific person” at last year’s G20 summit. Of Kim, Trump said “we met and we liked each other from day one”.

In meeting and praising these leaders, whose anti-democratic policies hugely restrict the freedom of their populations, Trump is not just giving them a legitimacy that they do not deserve, he is supporting a new, anti-democratic challenge to the world order.

Modi, addressing a press conference on Tuesday, said of Trump: “At the global level, our relationship is dependent on the similar democratic values we share.” In fact, the strong personal rapport between the two leaders is buoyed by their embrace of the populist strongman’s leadership playbook.

Trump’s club of strongmen leaders spells trouble for the world order and the problems it faces in the 2020s. Modi, Orban and Putin have all exhibited varying levels of climate change denial, for example, which will make the kind of international action necessary to prevent the worst effects of climate change – already a tall order – near impossible.

In the post-Cold War era, the US has played the role of the “global policeman,” supporting states in democratic transition and chastising regimes that risked backsliding. It now risks doing the opposite.