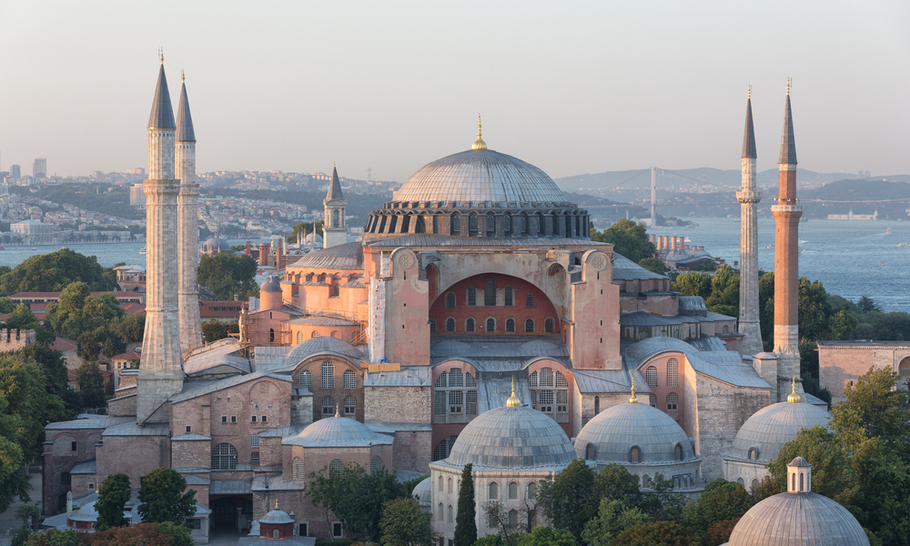 The Cathedral of St Sophia (meaning Holy Wisdom: Hagia Sophia to Greeks, Aya Sofia to Turks) is perhaps the greatest building to survive intact from the ancient world. Erected between 523 and 537, the Cathedral stood in Constantinople (now Istanbul) as a monument to the majesty of Christendom for nearly a thousand years. Then, in 1453, the capital of what we now call the Byzantine Empire fell to the Ottoman Turks. St Sophia was converted into a mosque; its mosaics were plastered over and minarets added. Four centuries later, Kemal Atatürk, the founder of modern Turkey, secularised the basilica in 1935. It has remained a museum ever since.

Until now, that is. By presidential decree, Tayyip Recep Erdogan has ordered that St Sophia is to revert to a mosque. It will, he insists, remain open to all — the Istanbul tourist trade depends on this magnet for 3.7 million visitors annually — but control of the basilica will be handed over to the Muslim authorities. At a stroke, the Turkish President has undone Attatük’s epoch-making work. St Sophia has been far more than a museum: as symbol of secularism, it represented tolerance not only for Turkey but for the Muslim world. From July 24, this meeting place for people of all faiths and none is to be monopolised by just one of the monotheistic religions.

In Geneva, the World Council of Churches expressed the “grief and dismay” of the Orthodox, Anglican and Protestant Christians that it represents. Like many other governments and organisations, the WCC begged the Turkish leader to reconsider his decision. Pope Francis put it more simply in his weekly address to pilgrims. “I am deeply pained,” he said.

Francis knows that papal appeals to Erdogan are usually in vain. In 2006 his predecessor Benedict XVI went on a mission to Turkey to ask the President to allow Christians to repair and maintain churches there, including places of pilgrimage. But Benedict’s appeal fell on deaf ears. Despite Erdogan’s boast that there are 435 churches and synagogues in Turkey, Christians and Jews there have faced discrimination and decline under his rule. In Greece, Christians have demonstrated against the Islamisation of St Sophia. But protests across the Orthodox world are simply ignored in Ankara.

Erdogan is whipping up old enmities — and he knows it. Not only has he reignited hostility in Greece, at a time when new waves of refugees may cause tensions between the two countries, but he risks alienating Russia, which remains a major regional force in Syria and elsewhere.

No less ominous was Erdogan’s implied threat to Israel in his claim that “the resurrection of Aya Sofia heralds the liberation of the al-Aqsa Mosque”. His implication that Jerusalem, too, could become a religious battleground again is deliberately provocative. The Temple Mount is administered by Muslims, but Palestinians often claim that Israel will one day reclaim the holiest place in Judaism and demolish the al-Aqsa Mosque that stands there. There is no evidence for such claims, but they enjoy wide currency among Islamists.

Unfortunately, such bombastic rhetoric is the basis of Erdogan’s Islamist politics. He sees himself in grandiose historical terms, but his bullying behaviour belies his boast to have revived Turkish leadership in the Muslim world. Even in the Middle East, he has few allies; elsewhere, he has none. His attempt last autumn to crush the Kurds in Syria once and for all proved to be abortive and appalled the Americans, among many others. He has exploited the refugee crisis to extract concessions from the EU, but his crude attempts to influence expatriate Turks in Europe have failed.

Even at home, Erdogan is unpopular. Since the failed military coup four years ago he has systematically eliminated opposition and censored the media. Despite this, he lost control of Istanbul in last year’s municipal elections. The new mayor, Ekrem Imamoglu, has emerged as a serious rival. After all, Erdogan himself began his career as mayor of Turkey’s largest city.

Hence the decision to polarise domestic and international opinion, by transforming the most famous building in Istanbul from a museum into a mosque, is vintage Erdogan. To the world, he proclaims that his decision “is the re-ignition of the fire of hope not just of Muslims, but…of all the oppressed, wronged, downtrodden and exploited”. But this is really a message to his mainly rural supporters at home. There, gaining global attention by glorifying Turkey’s imperial past and casting himself as a spokesman for Islam plays well with public opinion. The Ottoman Sultans were also Caliphs. Erdogan takes care to present himself as their successor, as both a politician and a preacher — like the Prophet Mohammed himself.

In this dangerous Turkish game of thrones, why does St Sophia matter so much? The answer is that it remains what it has always been: one of the genuine wonders of the world. According to the classic work Byzantine Art by the British historian David Talbot Rice, the domed structure of St Sophia was a synthesis by an unknown “architect of genius”, which transformed not only Christian but also Islamic architecture: “Nothing exactly similar, as large or quite as fine as St Sophia of Constantinople was ever built again, but we can trace the influence of the great cathedral…as a model for most of the large mosques which the conquering Turks erected in their new capital.”

The clash of civilisations, in Samuel Huntington’s pregnant phrase, is thus embodied in this single building. Its magnificent mosaics — whose ultimate fate is now uncertain, given the Islamic prohibition of images — depict Mary and Jesus, both Jewish and both of whom are sacred in Islam as well as Christianity. The cathedral is dedicated to divine wisdom, but there is nothing wise in the chain of events that have made it once again a global centre of gravity. Political theology always has the potential to erupt into political conflict. The Turkish démarche is (to coin a phrase) worse than a crime — it is a mistake. Making a museum into a mosque could prove to be Erdogan’s biggest mistake.