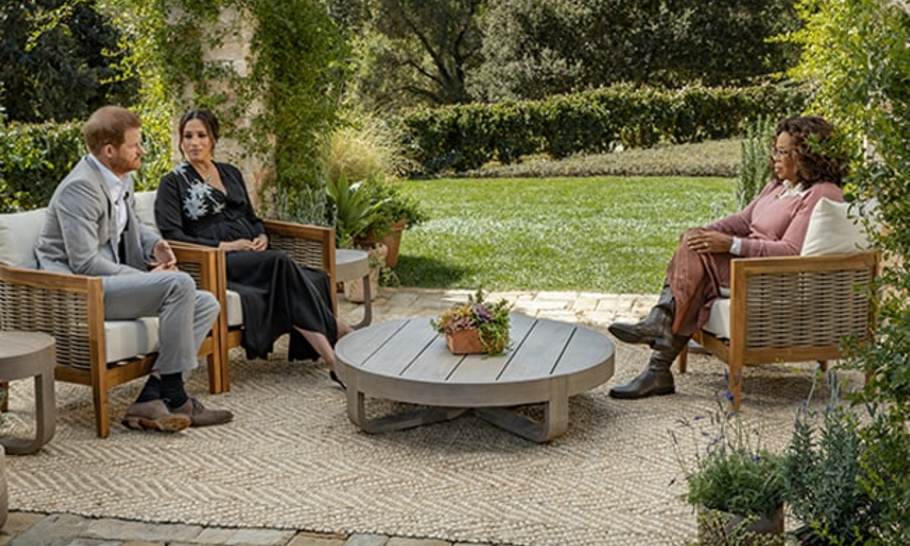 If, dear reader, you feel the slightest impatience with having to plough through the saturation coverage in the British media of a television interview with a certain young couple taking aim at the British monarchy, which hardly anyone in Britain has yet had a chance to watch, please spare a thought for those of us who have to write about it this morning.

One way to think about the Duke and Duchess of Sussex’s audience with Oprah Winfrey is as an exercise in comparative cultural anthropology. For American viewers, this was prime time entertainment: the latest twist in a reality TV saga, with a brave duo of rebels hitting back at their cold-blooded, bigoted, misogynistic family who are freezing Meghan out, just as they once froze out Harry’s mother Diana and, long before her, the Duchess of Windsor. For many people in Britain, by contrast, this looks like the revenge of two disgruntled members of the Royal Family from their self-imposed exile, trashing the institution to which they owe their celebrity and building their new careers by washing their dirty linen in public. What on one side of the Atlantic is a courageous exercise in truth-telling, calling out casual racism and revealing mental health issues that had unaccountably been hitherto ignored, is on the other side a cynical exercise in mercenary misery and petty spite, an unedifying unloading of trivial tribulations from two of the most privileged people on the planet.

To ask who is in the right in this tale of two continents is to miss the point: each echo chamber has its own version of the truth, to which it will cling no matter how much contradictory evidence the other may adduce. From the court of public opinion, there is no appeal.

What, then, can be done to heal the rift? In the first instance, there needs to be a truce. The Queen must order her courtiers to cease briefing the press against the Duchess and the Sussexes must call off their American lawyers from stoking up the war of words.

For the Palace, this means a self-denying ordinance, whatever the exasperation of hard-working public servants who feel they have endured the wrath of Meghan while acting in her best interests. Bullying allegations have fuelled the flames and should be dealt with as discreetly as possible. The suicidal depression of the Duchess during her time in England should be taken at face value. The Duke, too, may have suffered from PTSD from his wartime service in Afghanistan. There should be no playing down by the Palace of the gravity of mental illness, as undoubtedly occurred in Diana’s case. Clearly not enough was done to prepare a young black American woman for the culture shock she was bound to experience and for a life lived in the public eye; once this became obvious, lessons should have been learned. It seems they were not. A little humility from those to whom she was entitled to look for protection would not come amiss.

For the Royal Family, an effort must be made to build bridges. Perhaps the saddest fact that emerges from the interview is that Harry is no longer on speaking terms with his father. If this is true, the Prince of Wales needs to reflect long and hard on the implications of that decision. Meghan is also estranged from her father, who is in poor health. Even if Charles does not find his son and daughter-in-law easy to get on with, surely little Archie and the sister he is soon to have do not deserve to be deprived of their paternal grandparents. It would speak well for the future King if he could make a gesture of goodwill, even if full reconciliation is some way off.

As for the incident in which an unnamed member of the Royal Family is alleged to have raised with Harry the subject of their future child’s skin colour: by refusing to name the individual, the couple must know that they are casting aspersions on his entire family. The mere suggestion of racism is, as the Duchess says, “very damaging to them”. What was a private conversation is now in the public domain and will fester. Silence or denial are not good enough to lay the matter to rest. Whoever said what they did, even if they didn’t mean to sound prejudiced, should own up and apologise.

As for the Sussexes: it is probably too much to expect them to make amends. Having got a great many (though doubtless by no means all) of their resentments off their chests, however, they should have the decency to desist from any further exploitation of the insatiable curiosity of their global following about “the Firm”. They say they have everything they could possibly want or need. Harry may feel he was “cut off” without a penny but he had his inheritance from his mother and now, as professional celebrities, he and his wife will be effortlessly wealthy. Whatever grudges Meghan may hold against her in-laws, she is expecting a child. A period of silence from the Duke and Duchess would now be welcome.

The Queen has indicated that she will not be watching the Oprah interview, but is getting on with the day job. She also has a husband in hospital. Just a few months short of his hundredth birthday, Prince Philip is convalescing after a heart procedure. Did the thought cross the minds of a certain young couple that, by making themselves the centre of global attention, they might be darkening the last days of their paterfamilias? Or that the Queen — whom Meghan went out of her way to thank and praise for her personal kindness — deserves better than to have the final years of her reign overshadowed by an unseemly family row? She has endured the trials of Job; let her enjoy the evening of her long life with her children, grandchildren and great-grandchildren as the Psalmist says, “like olive plants round about thy table”.