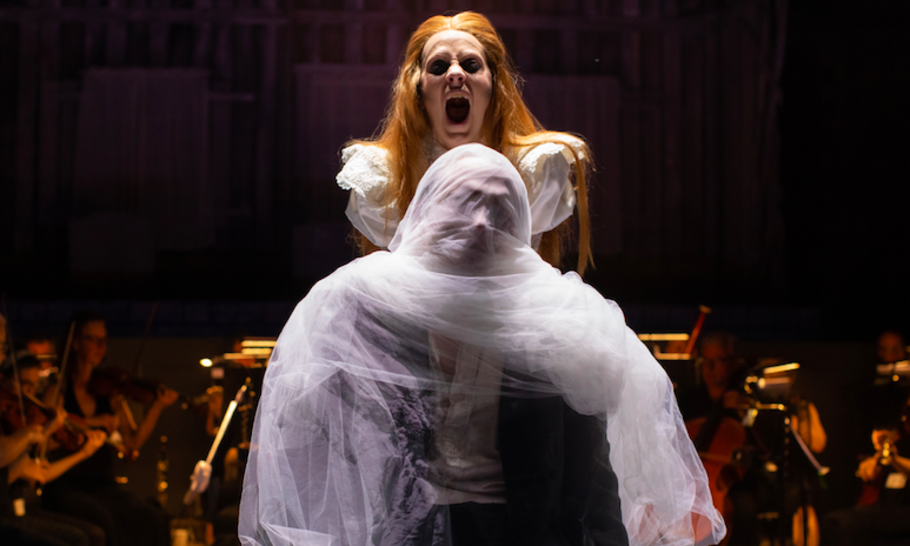 An evening of Italian verismo at Opera Holland Park gave a very effective production of two little-known works by Delius and Puccini. Verismo refers to some perfectly ordinary situation, such as four “Bohemians” sharing a flat in Paris, by turning it into an operatic drama full of passion. Puccini was a master, and the second half of the evening included his first stage work Le Villi. The first half featured Margot la Rouge : an opera by Delius, who is not normally thought of as composing for this genre.

“ It was his only opera, you know,” I heard one audience member say to another as we entered. Not true. Delius is largely thought of as a composer of orchestral works, but the well known “ Walk to the Paradise Garden” comes from his opera A Village Romeo and Juliet.

Margot la Rouge is quite different. A soldier arrives at a sleazy bar in Paris and is drawn to Margot, who inspires his finer feelings and reminds him of a country girl, Marguerite he once loved. When they eventually recognise one another he determines to take her away from this seedy life, but another of the girls brings in the pimp (aka L ’ Artiste). He kills the soldier in a jealous rage, Margot picks up the soldier ’ s weapon, kills the pimp, and the police arrive.

This melodramatic story was not a good fit for Delius, and the orchestration is more interesting than the story, but it contains a lovely duet between Margot (Anne Sophie Duprels) and the soldier (Samuel Sakker). The pimp is a nasty piece of work, and bass Paul Carey-Jones, who recently sang The Wanderer in Siegfried at Longborough, gave him a very powerful vocal and stage presence.

Ms Duprels killed two men on the same evening, as she also appeared as the jilted bride in Le Villi. Like the Delius, Puccini’s opera-ballo (i.e. including dance) was written for a competition by the publisher Sonzogno, but it failed to get even an honorary mention. As a result, Puccini abandoned Sonzogno and went to his competitor Ricordi. The failure is understandable as the libretto is pretty hopeless.

I found myself wondering why the tenor (Roberto — boldly sung by Peter Auty) rushed off, apparently on the day of his wedding to the soprano Anna, but this sets in motion a grievous sequence of events. She dies, and Anna ’ s father Guglielmo (Stephen Gadd, who doubles as an occasional narrator) calls on the villi (ghosts of dead maidens) to take revenge. When Roberto returns, full of remorse, the villi force him to dance himself to death.

The story is based on a legend from Mitteleuropa that also gives rise to Adolphe Adam ’ s ballet Giselle, set in northern Europe — experts may recall that the hunting party in that ballet, when Giselle finds Albrecht is already engaged to be married, is led by the Duke of Courland (a province of Latvia). The wilis would dance Albrecht to death but he is saved by the emergence of dawn when their power vanishes.

This opera provides no such reprieve, and when Anna reappears as one of the villi she sings “ I am no longer Love. I am Revenge”. If the idea of an Italian tenor dancing himself to death on stage seems a step too far, the production by Martin Lloyd-Evans finesses the problem beautifully. The dancers in their long white veils — designs by takis — were far more terrifying than the wilis in the ballet, more like the witches in Macbeth.

The great thing about Le Villi, however, is that it allowed symphonic composition, which was ideal for Puccini. He was a great exponent of expressing emotion through music, and this work was an astonishing achievement for a young man of 25. The conducting by Francesco Cilluffo was thrilling and Opera Holland Park did full justice to its swelling musical phrases.