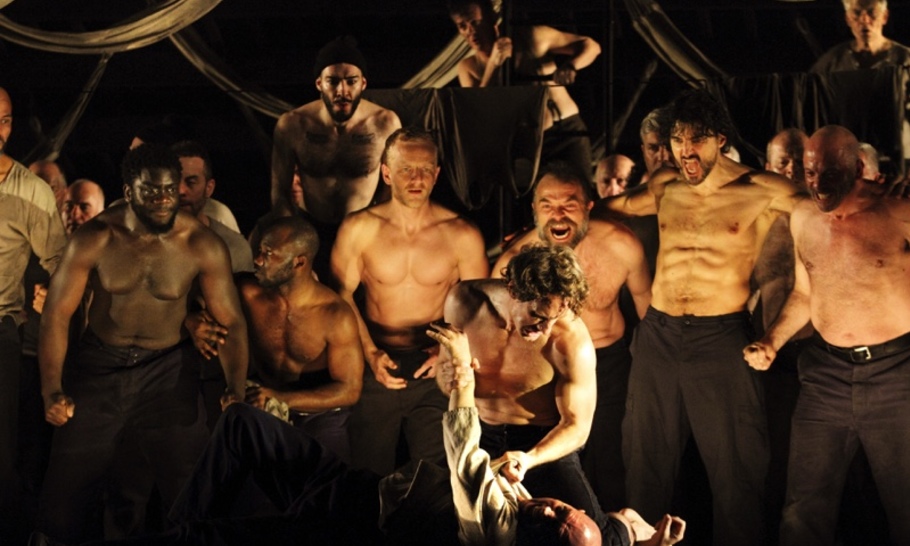 The ambivalence between good and evil, particularly in times of political uncertainty, is what informs Deborah Warner’s new production, as does Britten’s remarkable music, beautifully conducted by Ivor Bolton. Highly appropriate, therefore, that this production was first performed two years ago in Madrid, where the Catalonian rebellion informed the national political scene.

In the Royal Navy, rebellion was mutiny punishable by death, and the mutiny on the Nore in 1797 is an ever-present background for the officers tied to their ship at sea. This story takes place later that same year. But instead of a ship, Ms Warner and her set and lighting designers Michael Levine and Jean Kalman have created the feeling of a ship, with ropes, decks and ladders, and the movement of the chorus suggests mutiny could be in the air.

The Captain “Starry” Vere is hugely respected, but even he can find himself on the horns of a dilemma when the unexpected happens and he must dictate the consequences to Billy Budd, a seaman who over-reacts to a false charge of sedition, striking Claggart, the Master-at-Arms and causing his death. The whole drama revolves around these three, bookended by a prologue and epilogue showing Vere recalling the incident where he condemned a generous-spirited sailor without malice to hang from the yardarm. In this opening and closing scene we see not just the figure of the captain but his aged and decrepit self in later years. Claggart is dead, “Struck by an angel of God, but the angel must hang” as Vere says to himself at the time. The ‘Articles of War’ leave Vere with no choice, but he suffers the consequences of a moral failure for the rest of his life, despite Billy’s last words, “Starry Vere, God bless you!”.

To produce this subtle and stunning drama, Deborah Warner has taken Vere, Claggart and Budd at face value. Vere, beautifully sung by Toby Spence, plays it straight down the middle, giving little outward show of anguish despite his internal torments, and clear distrust of Claggart. Claggart’s homoerotic tendencies are deliberately underplayed in Brindley Sherratt’s marvellous portrayal, his well-oiled bass revealing a mixture of evilness and well-judged control over the seamen, and although he may be driven to destroy a man he longs for, the drama centres on Vere himself. In Jacques Imbrailo’s outstanding interpretation of Billy Budd, we see a youthful beauty and strength that he raises to the heights of purity and love in his valedictory farewell where he sings of contentment in seeing beyond the ship to a land where his soul will soon lay anchor.

The cast, almost identical to the production’s premiere in Madrid, is close to perfection. David Soar, Thomas Oliemans and Peter Kellner are all strong as the officers Flint, Redburn and Ratcliffe; Duncan Rock made a fine physical and vocal presence as Donald, with Sam Furness as the cowardly young Novice easily persuaded to do Claggart’s bidding and Clive Bayley a superbly sympathetic and wise Dansker. The chorus too were outstanding, moving superbly under the direction of choreographer Kim Brandstrup.

The moving levels of decks in this production give a marvellous interplay between officers and seamen, with some striking moments such as the compressed atmosphere of the encounter between the Novice and Billy in his under-deck hammock, and the final blessing of Vere as Billy descends below before climbing to his final death. This is a production with a cast not to be missed.