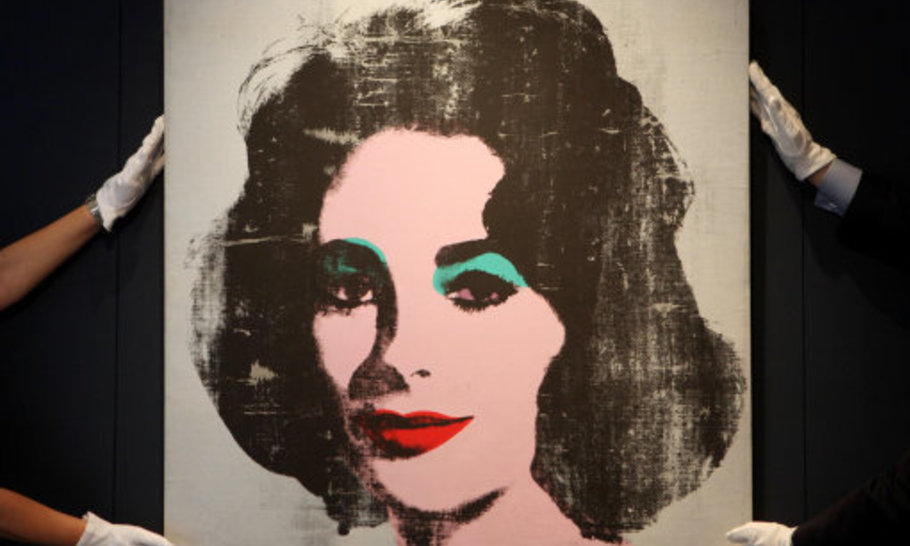 Four years ago, New York’s Jewish Museum put on an exhibition of Andy Warhol’s images of Marilyn Monroe and Elizabeth Taylor. Becoming Jewish was ostensibly about conversion. Monroe converted in 1956 when she married Arthur Miller and Taylor converted three years later. It was a crucial moment in the journey of America’s Jews from immigrants to main street.

Becoming Jewish was not, of course, about Jewishness or conversion. It was about fame and celebrity, like everything else Warhol did. Monroe and Taylor were two of the great figures of post-war Hollywood’s golden age. They were the very embodiment of beauty, success and fame. They and Warhol were contemporaries, born within a few years of each other and for Warhol the key attraction was obvious. He loved celebrity and they don’t come more famous than these Hollywood stars. “My idea of a good picture,” he said, “is one that’s in focus of a famous person.”

Warhol became famous in the early 1960s with his silkscreen works, Campbell’s Soup Cans (1962), Marilyn Diptych (1962) and Nine Jackies (1964) and his experimental film, Chelsea Girls (1966). He was the darling of Pop Art. In November 1962 he had his breakthrough exhibition in New York at Eleanor Ward’s Stable Gallery. It included the works Marilyn Diptych, 100 Soup Cans, 100 Coke Bottles, and 100 Dollar Bills. His images were full of wit and bright colours, and his subject matter included the consumer society and, of course, the greatest subject of the sixties — America.

Warhol wasn’t just about Pop Art. There was also camp, sex and rock and roll. In the late 1960s he managed The Velvet Underground and in 1969 founded Interview magazine. Susan Sontag wrote her famous essay, “Notes on Camp” soon after meeting Warhol. He was the very embodiment of camp and the new avant-garde: a mix of gay people, drag queens, consumerism, shock, rock and celebrity. Just right for the times.

In 1976 Warhol was in New York with a group of people watching the fireworks marking the bi-centennial. “It’s looks like a movie,” someone said. “A TV movie,” Warhol replied. Classic Warhol. In those days a TV movie was synonymous with trash, no depth, no high culture, no history or tradition. Just like his screenprints of coke bottles or Elvis.

The 1970s were a quiet time for Warhol, but he took off again in the celebrity-obsessed 1980s. In 1980 he made his portrait of Debbie Harry, soon followed by images of Edward Kennedy and Jane Fonda. In November 1984 Vanity Fair commissioned Warhol to create a full colour illustration of Prince for an article titled “Purple Fame.” He was a regular at Studio 54 in the heyday of disco and was photographed with Mick Jagger and Donald Trump, Elton John and Brooke Shields.

This major retrospective at Tate Modern is their first Warhol exhibition for almost 20 years. The irony is that an exhibition designed to bring in huge crowds will only be seen now online, since the museum has been closed because of Coronavirus.

It’s ironic because Warhol’s moment has passed anyway. From the Sixties to the Eighties, Warhol was always a product of his time, famous for being famous. Between 1963-68 he made more than sixty films. Who can name any of them now? Who under fifty has even heard of the Factory, Nico or Candy Darling? “Andy Warhol was my hero,” said Camille Paglia. Camille, who?

The Platinum fright-wigs, Studio 54, an eight-hour film of the Empire State Building… All these belong in a museum, a brief cultural moment in New York which has gone forever. So much of the celebrity was about shock. Images of Mao and Hammer and Sickle, another of an electric chair. A thirty-five minute film of a blow-job, a five and a half hour film of his gay lover, sleeping.

Almost half a century later none of it is shocking now. And without the shock, it’s not very interesting either. In a devastating review in The New Statesman, “When stardust loses its sparkle”, one of our best art critics, Michael Prodger, writes, “his historical moment has passed.”

“Andy Warhol” runs at Tate Modern and can be viewed online here.