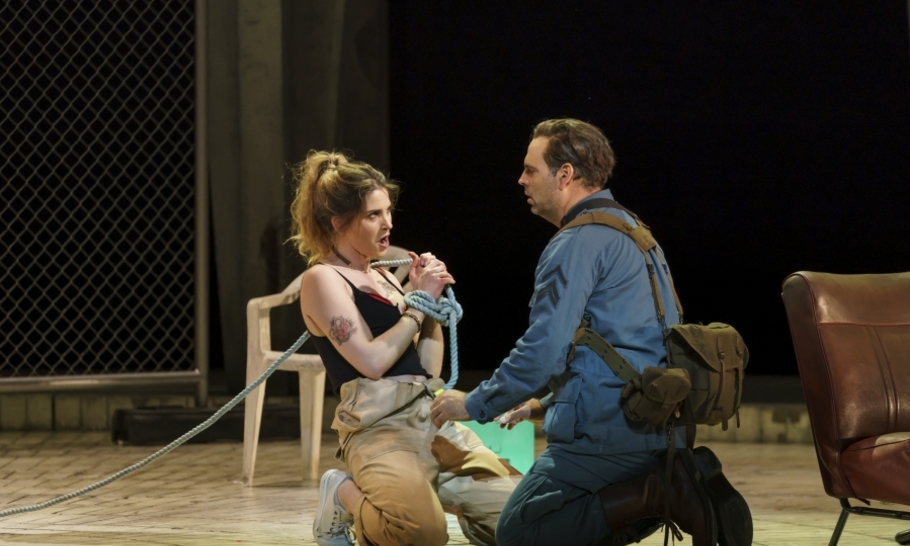 How should a director approach Carmen? Elegant Spanish dancing, stylish costumes, and a bit of earthy sexuality may help with atmosphere, but at its heart, this is the story of a young soldier’s disintegration when faced with emotional forces beyond his control. In her new production for Welsh National Opera, set in a Brazilian favela, director Jo Davies has grasped this.

This is a world where people make a life for themselves despite economic hardship, skirting the ubiquitous military presence, while the kids enjoy a bit of fun, and the adults a bit of smuggling when the soldiers’ backs are turned. This is the world of Carmen, a spirited woman who dominates other women, whose love affairs don’t last long, and whose vibrant seductiveness is capable of manipulating men and drawing them towards her.

Don José, posted here with his platoon, already has a brave girlfriend Michaëla, who visits him in this fearful place. She brings a message from his loving mother, who wants to see them get married, but then he’s given the task of guarding Carmen after her arrest and his safe world slowly falls apart. As Carmen herself, Virginie Verrez was every inch the self-possessed seductress, playful, willing to love and be loved, but always with an eye on the main chance. Vocally captivating, theatrically fascinating, she only yields to her own death because her fate is foretold when Frasquita (Harriet Eyley) and Mercédès (Angela Simkin) see it in the cards. Both gave robust portrayals, suiting a production where the women are strong, and the men work within the constraints of society and events.

Within this milieu, Anita Watson as Michaëla showed gentle but firm presence, with a beautiful soliloquy early in Act III, and Phillip Rhodes sang superbly as the toreador Escamillo, stylishly dressed and with a ready stage presence. As the hapless Don José, Dimitri Pittas balanced vocal power with personal weakness to reveal a man obsessed by a desire to regain what he can never recover. Their impassioned duets were superb, and when at the end of Act III he refuses to leave with Michaëla to see his dying mother, his fate and Carmen’s are sealed.

Despite the tragedy of this drama, a zest for life was present throughout in the glorious fights, the rambunctious children and the Brazilian Boi Bumba (Beat the Bull) in Act IV. With excellent sets, costumes and lighting by Leslie Travers, Gabrielle Dalton and Oliver Fenwick, this is a Carmen for our times, made musically thrilling under the baton of Tomáš Hanus, who conducted with sensitivity and huge panache. Portraying Carmen’s world in modern terms creates a reality in which cast and chorus gave everything. Utterly compelling.

Continues at Cardiff until 10 October with a revival in late February, plus tours to Plymouth, Llandudno, Birmingham, Oxford, Southampton, Bristol, Liverpool, and Milton Keynes — details here.