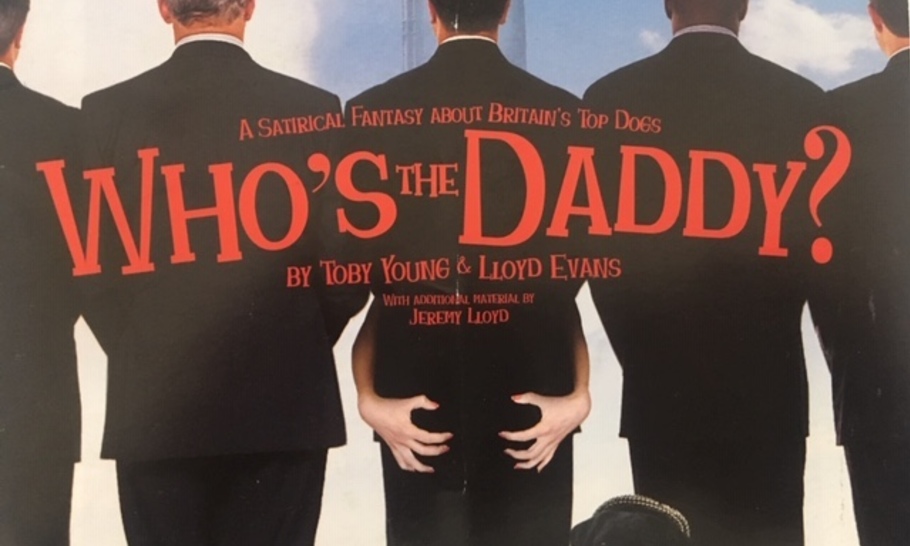 Theatre programme from Who’s the Daddy? which premiered on 25 July 2005.

The phone-call would arrive on Thursday, at noon or shortly after. “Are you coming for lunch today at the Spectator?” Of course, I would say. “Great. We didn’t get your reply to our invitation.” I hadn’t received an invitation, I would explain. “Ah well, that’s the Royal Mail!” The caller’s statement was a white lie intended to obscure the fact that I’d been invited at the last minute to replace a guest who’d dropped out.

This was in 1999 and my links with the Spectator, then edited by Boris Johnson, were pretty tenuous. It had published a poem by me and a couple of articles about Radio 4 and New Labour’s arts policy. But I had two invaluable qualities as an emergency chair-filler. I could reach the office in 20 minutes flat on my bike. And I was never not available.

Back then the magazine was based in a four-storey townhouse in Doughty Street, near Lincoln’s Inn, and there was a palpable sense of excitement about the place. Historically, the Spectator had leaned to the Right, but a few of its senior columnists had been dazzled by the audacity and charisma of Tony Blair. He himself had been a contributor in the 1980s and the magazine was widely read in Parliament and Whitehall. It was close to being Westminster’s “in-house journal”.

Lunch began at 12.45 with Moët popped and poured in the Editor’s office. After downing plenty of fizz, we trooped upstairs to a cramped dining-room where a large oak table was surrounded by ten or twelve chairs.

Talk at lunch was competitive and gossipy. Politicians aren’t nearly as fascinated by details of their manifestos as they are by personal rivalries and vendettas. The journalists knew that the lunch was an extended version of the editorial conference, held at 10.30am, so everyone was informally pitching ideas for the following week’s edition. Boris, the newly appointed boss, would invite suggestions for articles or undercover stings.

One Thursday, the broadsheet papers were filled with talk of “Poujadisme”, a half-forgotten movement from the 1950s led by a provincial French businessman, Pierre Poujade, who supported low taxes and light-touch government.

Boris had a brainwave. “Where is he? Track him down. Get Poujade on the blower.” “He probably died 20 years ago,” said someone. An intern discreetly left the table and returned half an hour later, having conducted a flurry of cross-Channel phone-calls. “He’s alive. He’s lucid. He’ll do an interview.” Even before the pudding arrived, the intern was on his way to Paris to speak to the elderly sage. The piece appeared the following week.

As an outsider I found it fascinating to find myself in a small room with just a handful of people who were setting the news agenda for the following week. Articles were being commissioned. Campaigns were being launched. I felt I’d arrived at one of the hubs of British politics.

My friend Toby Young suggested that we write a Carry On-style farce about events at “The Sextator”, as Fleet Street had dubbed the magazine. We knocked out a burlesque satire, Who’s The Daddy? in three weeks flat. It was staged during the summer of 2005 at the Kings Head Theatre, Islington, where it broke box-office records. Our principal targets were the male characters — Boris, Rod and David Blunkett — whom we characterised as ludicrous and unattractive specimens, ruled by their libidos, and apt to be exploited by the good-looking, high-status females at the office. By the end of the play, Boris is ruined and the three women have been vindicated.

Since the run in 2005 we have considered reviving the show, but its ribald tone feels a little out of touch with today’s more puritanical mood. “When are you going to let those puppies off the leash?” says a male character, ogling a secretary’s bust in Scene One.  That line got a decent laugh fourteen years ago, but nowadays it might seem sexist or abusive, even Weinstein-esque.

And yet I wonder if the mood has begun to change again. This week’s Charlotte Edwardes revelations have led some commentators, many of them female, to ask why she remained silent for two decades about Boris’s alleged molestations. Her bombshell was evidently timed to cause him maximum damage at the start of his first conference as Tory leader.

I’ve come to the conclusion that sexual comedy has completely polarised society. Some people, like me, wish we lived in a simpler and freer age, when a farce full of gags about boobs and knobs was a harmless, if childish, source of amusement.  But many argue, quite sincerely, that sexual harassment should never be a matter for jokes.

My solution would be to embrace both ends of the spectrum. If Toby and I were to mount a new version of Who’s The Daddy?, we should supress its origins as a farce and present it as an historical enquiry into a bygone culture. “A drama-documentary about an institutionally misogynistic workplace, told by eye-witnesses and survivors.” That way we could please everyone in the audience. The more old-fashioned and relaxed people would laugh at the burlesque comedy. Those of a more censorious nature would relish their sense of outrage and condemnation.