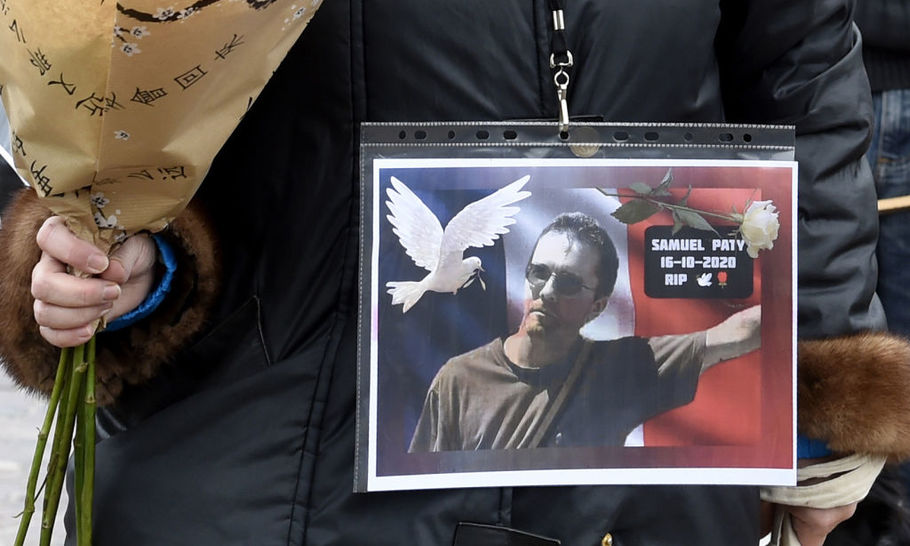 Why is Britain so silent on the beheading of a teacher in France at the hands of a foul, murdering hater of freedom of expression?

There was no mention at Prime Ministers’ questions, no condemnation by Dominic Raab or for that matter from Sir Keir Starmer or the shadow foreign secretary, Lisa Nandy. The  biggest teachers’ union, the NEU, has published no press release, and neither have the National Union of Journalists or Index on Censorship, the UK’s self-proclaimed NGO, whose task is to defend freedom of expression.

The victim, Samuel Paty, 47, decided to teach his teenage pupils a class on freedom of expression. It is important to remember that the French school-teacher has a near mythic status in France. They are seen as the transmitters of the civic virtues of Republican France.

The 1789 “Declaration of the Rights of Man and the Citizen” was approved by the National Assembly of France, on August 26, 1789. This foundational document makes plain what is at stake. Article XI states plainly that, “The free communication of ideas and opinions is one of the most precious of the rights of man. Every citizen may, accordingly, speak, write, and print with freedom, but shall be responsible for such abuses of this freedom as shall be defined by law.”

The men who organised Samuel Paty’s murder did so because, in his lesson on free speech, he had taken as his example the cartoons of the Prophet Mohammed that in 2005 had caused controversy first in Denmark and then world-wide. He wanted to show that every religion in the world has to tolerate being criticised and mocked, and that to murder the journalists of Charlie Hebdo, the French Private Eye, for satirising aspects of Islam and its ideological offshoot Islamism, was unacceptable.

Being sensitive he invited any Muslim pupil who might be offended to take a break from the class. Some of them went home to tell their parents — and an infernal torrent of social media attacks on Paty was launched. He complained to the police about the threats. But the Islamist hate machine against Western values is stronger in France than anywhere else in Europe.

France is in a mixture of shock, mourning, and anger. Paty’s funeral involved a national ceremony of mourning in the courtyard of the Sorbonne, a centre of scholarship through the ages that has stood against superstition and hatred, and against the creeping authoritarianism of religious extremists.

He was decorated with the highest rank of the Légion d’Honneur with a powerful oration by President Macron (a man who, lest we forget, married his own school teacher). Macron’s predecessor, François Hollande, stood beside Macron, as France stood in solidarity with the murdered teacher. (It was only the odious Marine Le Pen who tried to use the killing for her own political advantage.)

When the Saudi-financed Islamists organised the 9/11 terror attack in New York, Le Monde, carried a powerful front page editorial — “Nous sommes tous Americains” (We are all Americans). Millions of French people, who regard school as the place where freedom of expression is first inculcated into future citizens, now sport home-made badges proclaiming, “Je suis Prof” (I am a teacher).

The absence of any expression of solidarity in Britain is sad, a reflection perhaps of how inward-looking our society has become, under the twin pressures of Covid and Brexit. We are uncomfortable about confronting the freedom-denying aspects of organised faith — Christian churches not so long ago, Islam today. Paty was not Jewish. He was killed because he was a teacher. American social media platforms like Facebook and Twitter claim they extend freedom of expression, but are more often used as transmitters of hate. It is profit they want, not the transmission of civic rules essential to a free society.

As a personal gesture by someone who loves France and as a former president of the National Union of Journalists, I will be outside the French embassy in Knightsbridge on Monday at 11 am to wear my home-made “Je suis Prof” badge. I hope others will join not to make or hear speeches, not to shout at or about anyone, but  just to extend a British hand of solidarity to France and to teachers everywhere after the extreme evil that we have witnessed, but which in Britain has been passed over in silence.