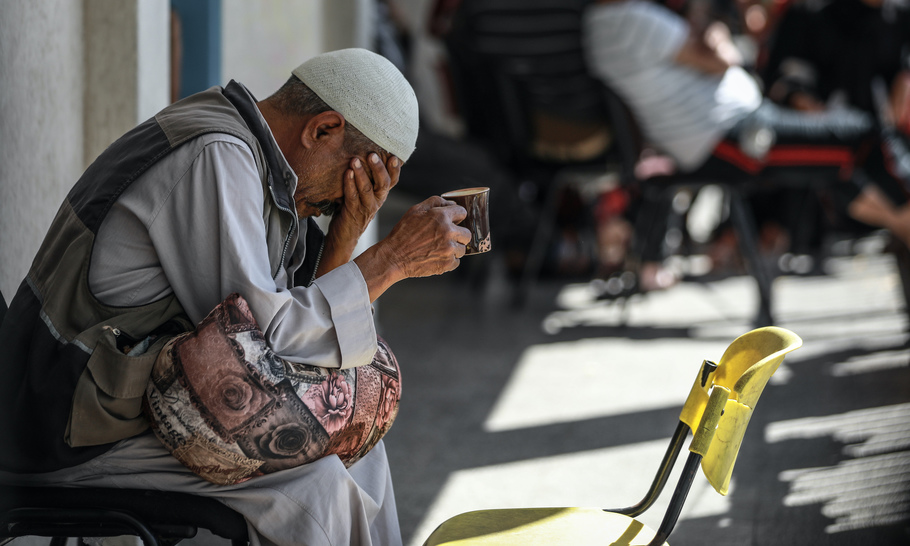 The sight of Palestinian families fleeing Gaza City under Israeli bombardment with no more than what they can carry reminds me of my Polish grandmother.

She also, as it happens, played a tiny part in the emerging state of Israel.

I remember greeting her at Heathrow in the early 1970s. She wore a jaunty brown cloche hat and carried a single, small, dog-eared suitcase with all her belongings. She had finally manage to leave Władisław Gomulka’s hardline communist regime in Poland.

At the start of the Second World War she and my university professor grandfather fled Lwow after the Red Army marched in. Lavrentiy Beria’s NKVD had begun rounding up intellectuals and army officers, later to be massacred at Katyn and elsewhere. My grandparents fled to Krakow, under German occupation, where he taught cultural history secretly as part of a kind of clandestine university.

In 1941 they were asked to shelter a Jewish toddler, a little girl, whose entire family had been shipped to Auschwitz. (The Krakow ghetto was where Oskar Schindler was buying the lives of Polish Jews earmarked for liquidation.) I never learnt the girl’s name. But I do know that she survived the war and was safely smuggled to Palestine, where she was placed with foster parents.

It has always seemed self-evident to me, even as a child listening to my grandmother’s stories, that the Jews, persecuted down the centuries, deserve a country where they can live in peace. Equally, it seems obvious to me that the Palestinians too should have a home they can call their own. No other equation will lead to a settled peace. Nothing else will stop the killing.

The deadly struggle, or what has come to feel like a deadly struggle because the option of co-existence seems now so remote, is not at its core, political. It is existential. It is a struggle between two closely related peoples, each of whom lays claim with equal force to a narrow strip of land drenched in religious symbolism.

It’s a struggle about place and memory, with convictions held so deeply that dialogue simply turns to rage. The attempt to suppress such memories by political means leads to what the late Chief Rabbi Jonathan Sacks called a kind of collective dementia: a loss of memory that leads to a loss of identity, which in turn leads to inner and eventually overt conflict.

This is not helped by an exaggerated sense of entitlement on both sides. The assertion that Jews have a unique claim to the Holy Land is as unhelpful as the claim by hardline Palestinians that Jews have no claim at all. From these fundamentalist positions, it’s a short leap to assert that Israel has no right to exist and the Palestinians have no right to a homeland. This is the Gordian knot at the heart of the conflict.

The very existence of the state of Israel is rooted in the historic “right of return” of Jews to an ancient religious homeland, enshrined in the secular law of Israel. Palestinians, who were expelled or left in 1948, enjoy no such right, outside unenforceable UN resolutions. The political, and not least the demographic, challenges to Israel of allowing the Palestinians to enjoy the right that Jews do, are immense. But that does not make it right for one people — and not the other — to be given the unlimited right of return to a land that belongs to both of them.

This double standard applies also to the language of loss and return. In recent years Right-wing Israeli governments have sought to censor the word Nakba (“Catastrophe”), which refers to the exodus of Palestinians at the time of Israel’s creation. If the memory of the Nakba, commemorated every year on May 15, can be buried, argue some Jewish leaders, perhaps the Palestinians will stop thinking about the past and move on.

The obvious irony is that Israel’s very existence and the resilience and survival of the Jewish people is cemented by celebrating each year memories and rituals that stretch back thousands of years including, of course, the Shoah or Holocaust.  You do not need to assign a moral equivalence to both events to see that there’s an inequity here.

Benjamin Netanyahu had hoped to relegate the Palestinian cause to a sideshow by pursuing agreements with Israel’s Arab neighbours, the so-called “outside-in” strategy: normalising relations with the UAE and Bahrain to start with, followed by Morocco and possibly by Saudi Arabia.

A demoralised Palestinian population, abandoned by the Arab world, would give up the fight. The current cycle of violence has blown a hole in that strategy.

More damaging than the violence in Gaza, however, is the inter-communal violence that has erupted between Jews and Arabs within Israel itself. Disturbances by Israeli far-Right extremists in East Jerusalem, where the displacement of Palestinian families continues, and raids on the al-Aqsa mosque by Israeli police have brought outraged Arab citizens of Israel onto the streets.

This is a perilous new phase. Jewish extremists shouting death to Arabs’ confronting Arab rioters burning synagogues in the Jewish heartland is the stuff of which civil wars are made. There are 1.9 million Arabs in Israel, making up 20 per cent of the population. Their rights have been increasingly curtailed as Jews seek to secure their hold. This, too, is an existential issue subject only in part to a political fix.

Like the Jews and Palestinians, like all the dispossessed, the events in my babça’s life had a profound effect on her and her attitudes. Mention of Germans or Russians sent her into a rage. She lived in constant fear that it would all happen again”. One day I saw her stashing tins of food in her bedroom cupboard. What are you doing, Grandma? We have plenty of food in the kitchen.” She replied: “I am a refugee. You never know.” Fear drives people to do irrational things.

In the 2019 movie Crescendo, the Israeli director Dror Zahavi explores the possibility of achieving some human connection between individual Arabs and Jews. The film is loosely based on the West-Eastern Divan Orchestra, made up of Israeli, Palestinian and other musicians from Spain and the Middle East, created by Jewish conductor Daniel Barenboim and the late Palestinian scholar Edward Said. It proves very hard work. In the end all that unites the young musicians is the music.

There will be no Palestinian state — at least, not in the foreseeable future, if ever. This is in part because Israel has never really wanted one. But it is also because the Palestinian leadership has proved to be chronically inept. Hamas in Gaza is the repressive, intransigent face of Palestine. The Palestinian Authority in the West Bank is its flabby, corrupt counterpart.

Peace in Israel-Palestine will not come by political means from on high, let alone from Washington. It will not flow from backroom deals between a supine Palestinian Authority and an Israeli state increasingly opposed to compromise.

A political settlement will only follow, as it did with the peace movement in Northern Ireland, when ordinary Israelis and Palestinians decide they wish to live together peacefully and reach out to each other across the divide. We can only hope.