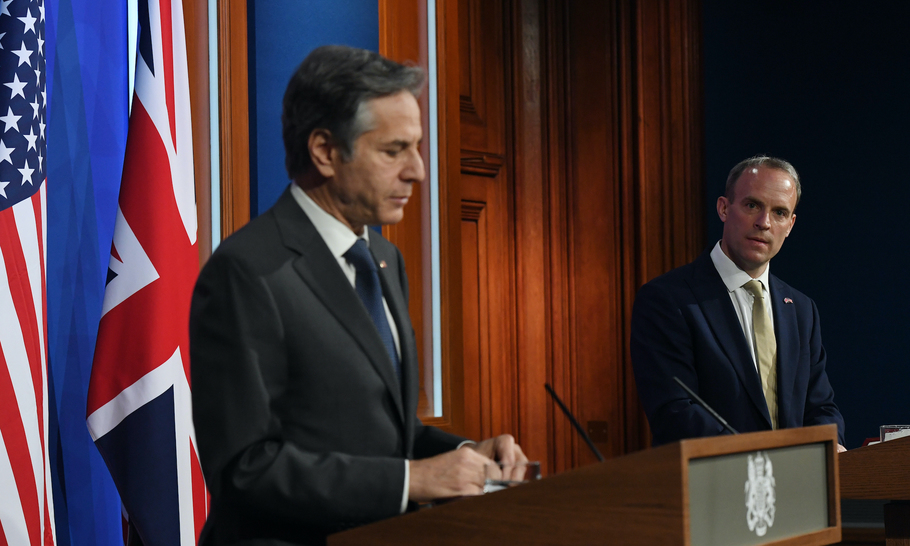 Antony Blinken (left) and Dominic Raab at Downing Street May 3, 2021.

It has been a little while since diplomats on either side of the Atlantic invoked the mantra of the “special relationship”. During the Trump years the President’s transactional attitude to the outside world put even hallowed Anglo-American ties of language and history in the shade. There had been no special favours forthcoming from President Obama, either, and there have been concerns, too, that President Biden might have reservations about Britain, arising from his Irish roots. The special relationship, by definition, depends on warm personal relations at the top and each new resident of the White House is anxiously awaited in London. Boris Johnson was visibly delighted that Joe Biden called him immediately after his election. To be treated as primus inter pares among European leaders even after Brexit must indeed have been gratifying. Scoffing at the special relationship had become a regular media pastime; now the boot was on the other foot.

The phrase was coined by none other than Winston Churchill, who embodied it supremely well. In a speech given exactly 75 years ago, the former war leader eulogised not only “the growing friendship and mutual understanding between our two vast but kindred systems of society, but the continuance of an intimate relationship between our military advisers, leading to a common study of potential dangers”. That still sums up pretty well why the relationship matters not only to the British but to Americans too.

On Monday Antony Blinken, the new Secretary of State, laid on the bonhomie. Standing next to his opposite number, Dominic Raab, he told a press conference that President Biden was looking forward to next month’s G7 summit in Cornwall. Blinken described the relationship in glowing terms: “It’s effective, it’s dynamic and it’s close to the hearts of the American people. The work we do together serves our people’s interests across a vast array of issues. I think our bilateral relationship is also vital to the world…We’re connected by ties of friendship, family, history, shared values and shared sacrifice.”

The sacrifice of which the Secretary of State spoke has a special meaning for him and for the Foreign Secretary too. Blinken is Jewish. His maternal grandparents came from Hungary and his stepfather, Samuel Pisar, was a Polish Holocaust survivor who was rescued by GIs from a Nazi death march. Raab’s father was also a Jewish refugee, who fled Czechoslovakia after the Munich agreement in 1938. Both men have personal reasons to be grateful for the wartime alliance and indeed both are staunch Atlanticists — something that can no longer be taken for granted in Washington or London.

Today’s challenges are different, yet our shared history and values still chime. The talk now in foreign policy forums is of a new Cold War between the US and China. This week one of the most distinguished figures ever to occupy the office of Secretary of State, Henry Kissinger, gave a speech in which he warned of the consequences of such an impending conflict. He told the McCain Forum that a Sino-American Cold War would be much more dangerous than that with the Soviet Union because of the development of artificial intelligence. The risk is that “machines can develop their own judgement. In a conflict between high-tech powers, it’s of colossal significance.” Kissinger told Die Welt that the only solution to the AI problem was co-existence rather than competition: “Strive for it; the alternative of an all-out conflict strains the imagination.”

Antony Blinken would do well to heed the warnings of his 97-year-old predecessor. Kissinger still seems as sharp as ever, half a century after he was the architect of Nixon’s famous visit to China. This time, however, the task of rapprochement is far more intractable. It is not merely that the two sides hold incompatible views on regional security, human rights, the rule of law and many other issues. That was as true in the Mao era as it is in Xi Jinping’s. The problem is, as Kissinger points out, that, unlike either the Soviet Union or the China of the 1970s, today “China is a huge economic power in addition to being a significant military power”. Beijing does not fear Washington, but aspires to replace its dominant role in global leadership.

Hence the United States needs its allies every bit as much as it did during the Cold War. America’s pivot to the Pacific does not imply that Britain is now irrelevant. On the contrary: the UK’s ties to the region — not least our commitment to the people of Hong Kong, enshrined in an international treaty to which China is a signatory — mean that we are an essential partner of the US in its efforts to deter China from its present aggressive trajectory. Blinken and Raab have plenty to discuss quite apart from China, but on this most pressing of issues it is vital that the British and Americans co-ordinate their policies as closely as possible. The estrangement of New Zealand from the “Five Eyes” intelligence community is a warning of how fragile, even fissiparous, the coalition of democracies may be.

Churchill was prophetic in identifying the “the study of common dangers” as a vital function of the special relationship. Shared experience and intelligence are indispensable, but they are insufficient to deal with the impending threat of a potentially disastrous new superpower rivalry. Britain has never been, as Harold Macmillan impudently implied, the Athens to America’s Rome. But we can revitalise the partnership that has served us so well in war and peace. Blinken, Raab and the other foreign ministers gathered here this week are the political equivalent of the doctors and scientists who have rescued humanity from coronavirus. Averting conflict is the primary purpose of diplomacy. We are entering a period when literally nothing is more important.