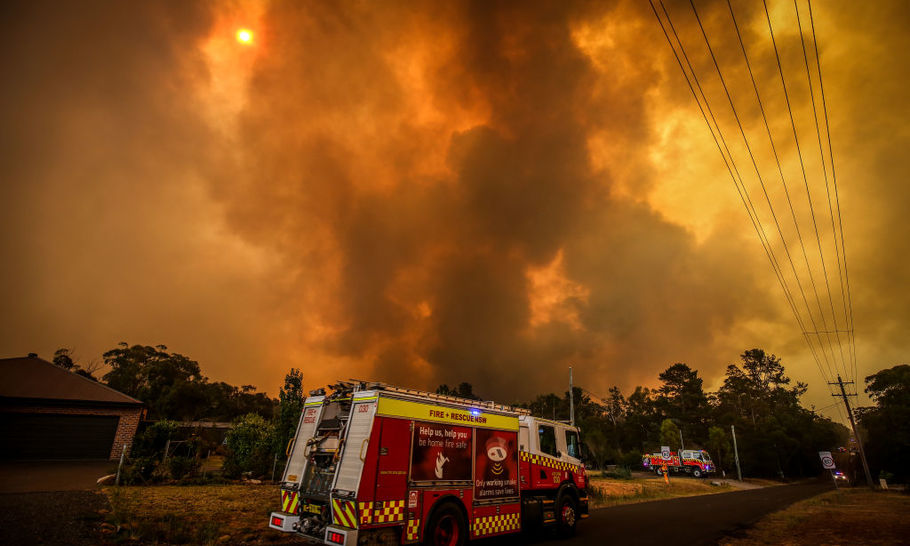 Sydney arose to a blood-red sun straining to force light through a smoke-filled sky. Ash is falling on the city. Australia has sweltered under its hottest day ever — twice — in the past week. Records set on consecutive days established a staggering new mark of 41.9C on average across the continent. In the Western Australian town of Eucla, the mercury hit 49.8C.

Fires have affected 3.1 million hectares of New South Wales and Queensland. To put that in context, if the centre of the devastation was London, it would stretch to Cambridge in the north, Brighton in the south, Oxford in the west and Canterbury in the east. Hundreds of homes, ten lives — including two volunteer firefighters — and countless endangered native animals have been lost.

Compounding the disaster for the conservative Liberal government is Prime Minister Scott Morrison’s ill-timed family holiday to Hawaii, seen as symbolising his absent leadership on climate change. The deaths of the firefighters have stoked public anger with him and his government.

The fires mock Morrison’s assiduous denial of climate change — a term that civil servants, including firefighters, have been warned to avoid uttering aloud. This official avoidance of reality has pushed Australia to the embarrassing periphery of global efforts to halt, if not reverse, climate damage, even as the government pursues the coal industry as a pillar of its economic growth promises.

It was with the support of big coal that Morrison and the conservative Australian Liberal Party won the national election this year. He then put jobs over the environment by giving the go-ahead to a massive coalmine of questionable economic value.

If Morrison’s head-in-the-sand approach to the crisis wasn’t clear before the U.N. Climate Summit in New York in September, which he refused to attend, he certainly made it clear when he responded to Greta Thunberg’s searing speech on the urgency for action. Australians, he told the world, live in a “wonderful country and pristine environment”. And he warned children about “needless anxiety” over their futures.

Before summer even arrived, the country was on fire.

Since October, the destruction has accelerated. Last Thursday, New South Wales Premier Gladys Berejiklian declared a week-long “state of emergency”. It’s the second time in as many months that this contingency has been used.

While the scale of the fires is harrowing, it’s not unexpected. The former chief of New South Wales Fire and Rescue, Greg Mullins, said last month that he and 23 other emergency chiefs have been seeking a meeting with Morrison since April, because they “knew that a bushfire crisis was coming”.

“This government fundamentally doesn’t like talking about climate change,” Mullins said. “We would like the doors to be open to the current chiefs, and allow them to utter the words ‘climate change’. They are not allowed to at the moment.”

Morrison isn’t just distancing himself from the professionals. Australia relies heavily on its volunteer Rural Fire Service. New South Wales has the world’s largest unpaid firefighting agency, with over 72,000 members. Thousands of them — like Andrew O’Dwyer, 36, and Geoffrey Keaton, 32, who were killed on Thursday night — are putting their lives at risk by tackling the current blazes.

This month, the Prime Minister rejected calls for more help for firefighters as the situation worsens. “The fact is,” he told a press conference, “these crews, yes, they’re tired, but they also want to be out there defending their communities.”

Exhausted and unpaid, many volunteers didn’t see it the same way. “We’ve got a PM that’s quite happy to say we’ll work them till they break,” an anonymous volunteer told Guardian Australia. “It shows a massive disconnect with what’s on the ground. Everyone knows something’s changed.”

What’s really brought the scale of this disaster home is the fate of the country’s endangered koalas. Their populations have been decimated and TV footage of the burnt, slow-moving marsupials drinking water from bottles offered to them has become the heartbreaking image of government denial.

An urgent New South Wales parliamentary enquiry heard this month that the destruction of the koala population and its habitat has been unprecedented, with the animals unable to outrun the fires.

“We’ve lost such a massive swath of known koala habitat that I think we can say without any doubt there will be ongoing declines in koala populations from this point forward,” Mark Graham, an ecologist with the Nature Conservation Council, said.

With only 80,000 koalas left in the wild, the species was already considered “functionally extinct” by the Australian Koala Foundation. Their fate is now even more uncertain.

While the threat of fire is ever-present in Australia and can never be fully mitigated, the same cannot be said for the government’s considered decision to approve the Adani coalmine at Carmichael in Central Queensland.

The coalmine would be the largest in Australia, and one of the world’s biggest, producing at peak capacity 60 million tonnes a year, much of it low quality, high ash product. There are a range of estimates of the economic benefit and potential harm of the mine, but what it does demonstrate is the government’s commitment to the economy ahead of the environment. A report by the Institute of Energy Economics and Financial Analysis found the mine would be “un-bankable and unviable” without $4.4bn in effective government subsidies.

The current bushfire response and the support for Adani are just two examples of government policy that refuses to prioritise climate change. The 2020 Climate Change Performance Index released this month by a group of international think tanks ranked Australia sixth-worst on a list of 57 countries for emissions, renewable energy development, energy use and policy. When it came to policy alone, Australia was dead last.

Damningly, the report noted that the government has “continued to worsen performance at both national and international levels… [and] is an increasingly regressive force in negotiations and has been criticised for its lack of ambition”. Special note was made of the decision to approve Adani.

Instead of making substantive steps towards addressing the threat of climate change, the government has just added mirrors to the smoke. To meet its 2030 Paris emissions commitments, Australia will be using carry over credits created under generous soon-to-be-obsolete Kyoto targets. It is the only country planning to do this, with no legal basis.

Even within the Liberal Party’s ranks, members are starting to speak out for change. New South Wales Environment Minister Matt Kean has set himself apart, telling the Smart Energy Summit that the fires were “exactly what the scientists have warned us would happen.”

“Longer drier periods, resulting in more drought and bushfire,” he said. “If this is not a catalyst for change, then I don’t know what is. This is not normal and doing nothing is not a solution.”

At least while Rome burnt, Nero fiddled. Scott Morrison has done little more than get himself a Honolulu suntan before heading home to apologise. But he didn’t say sorry for his refusal to deal with the reality of climate change — only for taking a holiday while the country goes up in flames.