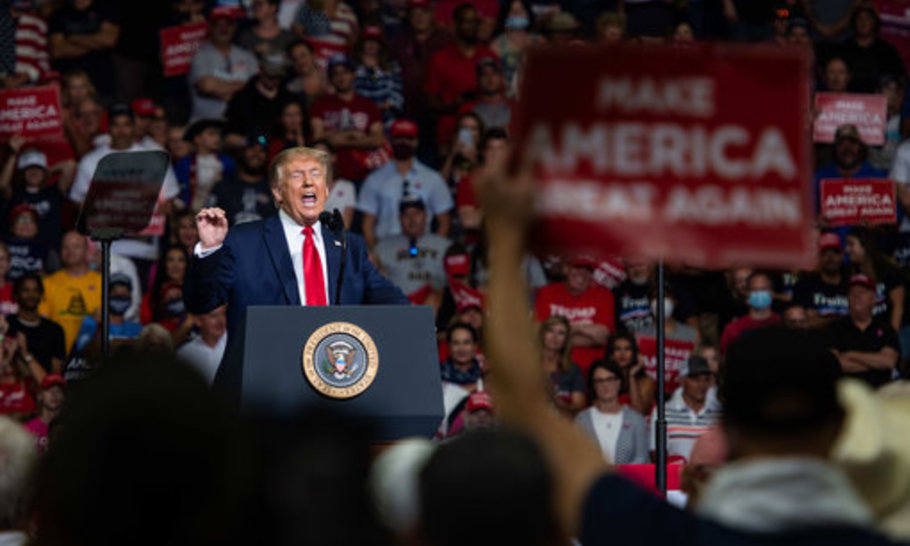 Is Donald Trump’s conduct in office — past, present and future — a threat to the United States? The question has now been posed by his own former National Security Adviser in a TV interview to publicise his memoirs. John Bolton warned that a second term for Trump would pose “a danger for the Republic”. The President’s “policymaking is so incoherent, so wrapped around his own political fortunes,” he said, “that mistakes are being made that will have grave consequences for the national security of the United States.”

Coming from the man who for 17 months was responsible for advising the President on a daily basis in the field of national security, this is a pretty damning indictment. Trump’s response has indeed been incoherent. It has also been menacing. After legal attempts to stop publication of Bolton’s book failed, the Commander-in-Chief tweeted: “He likes dropping bombs on people, and killing them. Now he will have bombs dropped on him!” An example of Trumpian humour — or something more sinister?

Fortunately for Bolton, he lives in a free country that is still under the rule of law. Moreover, he is in good company: the President has denounced many of his compatriots in similarly extravagant terms, including generals, judges and journalists. Quite a few of Trump’s targets are officials he himself appointed to his Administration. If Bolton was a “wacko”, as the President now claims, why appoint him to such a position of trust?

It is true that Bolton was seen as a hawk, even a warmonger, by so many members of Congress during the Bush Administration, in which he served as UN Ambassador, that he was never confirmed in office. But British commentators, such as the BBC’s Justin Webb, who describe Bolton as a “neocon” do not understand the term. Neoconservatives, in Irving Kristol’s famous phrase, are mostly former liberals “mugged by reality”. They work for the “national greatness” of the US in order to make what Natan Sharansky calls “the case for democracy”. Bolton was and remains a lifelong conservative. He shares with neoconservatives a commitment to democracy and human rights, but only insofar as these goals serve the American national interest. War, for him, is a legitimate means to that end — but he would never risk American lives solely to promote global democracy.

Trump, according to Bolton, is guided in foreign and security policy mainly by domestic politics. Right now, for example, two American carrier task forces are conducting exercises in the Western Pacific — the largest show of Western force there for two years. Their purpose is to remind the Chinese that the US Navy is not to be trifled with, after various provocations by Beijing against its neighbours.

Knowing what we now know from Bolton’s book about the  present occupant of the White House, however, there must be more than a suspicion that this demonstration of naval power is motivated by the President’s need to prove that he is indeed tough on China. The Room Where It Happened depicts Trump soliciting favours from Xi Jinping to help his own re-election campaign. When it came to defending national security in his dealings with dictatorial regimes, Trump was “naive”, according to Bolton, and “many of these foreign leaders mastered the art of ringing his bells”.

So what would happen if Xi decided to call Trump’s bluff? Mike Pompeo, still Secretary of State with his own presidential ambitions, has talked tough on China and he probably believes what he says. But the President himself blows hot and cold on the subject. His attitude to the likes of Xi and Putin seems less of revulsion than of envy. Bolton claims that Pompeo shares his own view of Trump’s incoherence — and no wonder.

Bolton’s book has reignited a new American debate over national security. Against the backdrop of Covid-19 and an impending presidential election, this episode will illuminate the political scene brightly but only briefly. The United States is still in the grip of the pandemic: new cases are rising by at least 50 per cent a week in several states — including Texas and Florida —  even as the economy emerges from lockdown. This experiment is being conducted mainly by state governors, but at the urging of the Federal government; indeed, the President held his first rally last weekend in Oklahoma, where coronavirus is rampant. He is taking a huge political gamble. As another White House adviser, Dr Anthony Fauci, has pointed out, the US is still enduring the first wave of Covid-19. If deaths were to soar again across America, public opinion will blame Trump.

Meanwhile, the putative Democratic candidate to replace Trump has been all but invisible for months, content to lead the polls and let the incumbent make mistakes while he self-isolates. Joe Biden gives no press conferences or interviews even to friendly media, makes hardly any speeches and appears in public only wearing a face mask. He has done nothing to dispel the suspicion of incipient dementia that has been prompted by his seeming inability to string two sentences together on the rare occasions when he speaks. There has certainly been nothing presidential about his conduct so far. Will the real Joe Biden please stand up?

At November’s general election, now only just over five months away, the American electorate is likely to be faced with a choice between two self-serving septuagenarians: an incoherent Trump and an incompetent Biden. Likely, but not certain: either or both candidates could yet pull out. In Trump’s case, the prospect of almost certain defeat might deter him from seeking a second term. In Biden’s case, physical and mental unfitness for office might yet intervene. With everything still to play for, the choice of vice-presidential candidates is more important than ever.

It is remarkable that with these presidential rivals, both of whom have been prominent in public life for some forty years, the outcome of this contest should be so unpredictable. Even more striking is the fact that if, in John Bolton’s words, Trump is “a danger for the Republic”, the same could plausibly be said of his likely opponent, albeit for different reasons. Perhaps the only certainty is that both men are a danger to themselves. The winner will be the one who makes the last but one mistake.