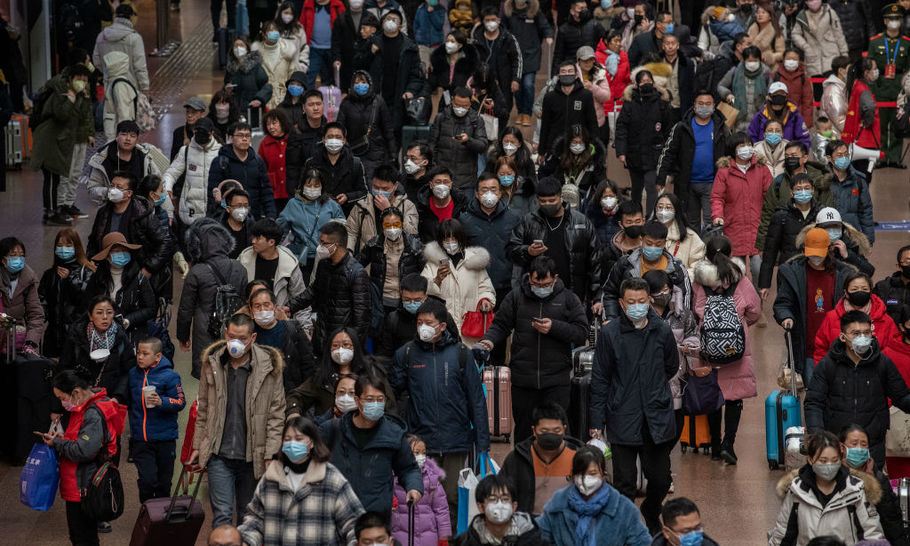 Coronavirus, which has already killed 26 people, is striking China at the worst possible moment. The biggest annual migration in the world, of 100 million people, has just begun ahead of the Chinese New Year on January 25. It marks the Year of the Rat. Millions go by train, bus, car and airplane to celebrate the most important holiday of the year with their families. The holiday lasts until January 30.

The virus originated in the central China city of Wuhan at the end of 2019 and has spread to more than 13 provinces, as well as to the US, Thailand, South Korea, Japan and Taiwan. It is transmitted from animal to human and human to human. There is no vaccine. A patient either recovers or dies.

Gao Fu, the director-general of China’s Centre for Disease Control and Prevention, said that the new virus was adapting and mutating. “This shows the challenges of health authorities in controlling the outbreak,” he said.

As of Thursday morning, the government of Wuhan closed down all buses and ferries, as well as the subway, airport and railway station for departing passengers. It ordered all its citizens to wear masks and made it a criminal offence not to do so. The city has been closed to the outside world. It has prepared 40 million facemasks, five million sets of protective clothing and 5,000 monitoring machines.

But the government cannot shut down the national transport network. The Spring Festival is the most important holiday in the Chinese calendar and, for many people, their only chance to see their family and hometown during the year. Planning involves months of preparation and the use of thousands of aeroplanes, trains and buses. Such a mass migration, however, offers a unique opportunity for the virus to spread all over the country.

The rapid spread of the disease has raised two serious issues. First is the delay in announcing the existence of the virus. On December 31, Chinese state media reported 27 cases of an unknown type of pneumonia in Wuhan. Over the next two weeks, the city government identified many new infections, saying that the virus was similar to SARS (Severe Acute Respiratory Syndrome). But the Wuhan Evening News, the main newspaper of the city, did not put the outbreak on its front page until January 19.

Second is the over-concentration of power. People in Beijing describe governance as “an echo chamber”. Officials are afraid to report bad news and wait for instructions from above. President Xi Jinping has concentrated enormous power in his own hands. So it was only after he issued a nationwide warning on the virus on Monday that the full apparatus of the state went into action. The policy failures in Taiwan and Hong Kong may also be due to this. Did officials give Xi an accurate account of what was going on in both places? Did he take decisions based on incomplete intelligence?

In a statement on Sunday, China’s National Health Commission said: “The source of the new type of coronavirus has not been found, we do not fully understand how the virus is transmitted, and changes in the virus still need to be closely monitored.”

The epidemic represents a global test of China’s credibility — has it reported the disease quickly, accurately and comprehensively? Has it taken all the measures necessary to prevent it spreading? In 2002-2003, a slow response and inadequate information was one reason why the SARS outbreak that started in China killed around 800 people.

In the world of myths and symbols in which many Chinese believe, it is a severe challenge for President Xi. Last year, China was hit by swine fever, which led to the culling of two million pigs.

Zhong Nanshan, 84, one of China’s top specialists in respiratory diseases and the man who discovered the cause of the SARS virus in 2003, has gone to Wuhan to investigate the disease. He said that the source of the coronavirus may be the rhizomys, a large rat-like rodent, that has become a popular and expensive form of meat. It is known in Chinese as “bamboo rat”. Rich in vitamins and nutrition, a dish of them costs 1,000 yuan. Are these pig and rat disasters a bad omen that foretells the end of the dynasty?

It also casts China in an unfavourable light for its exclusion of Taiwan, which already has one confirmed case, from the WHO. This means that the island does not receive immediate information from WHO meetings; such rapid intelligence could be critical during an emergency. “Taiwan’s 23 million people, as in other corners of the earth, could face health risks at any time,” said President Tsai Ing-wen. “I again urge the WHO not to exclude Taiwan over political factors.”

On Wednesday, the National Genomics Data Centre in Beijing said that 88 per cent of the strain of the coronavirus was identical to a SARS sample collected in 2017 from a cave of Chinese bats that proved to be the source of SARS.

“Despite the genetic similarity, the new virus is not SARS, but a close relative [belonging] to a different class called the betacoronavirus — a single-stranded RNA virus that can infect wild animals, livestock and humans,” it said.

Medical workers are on the front line. During the SARS outbreak, they accounted for 19 per cent of the 4,948 cases reported in mainland China. So far, 15 medical workers in Wuhan are confirmed cases and one other is a suspected case. One of the 16 patients is in a critical condition and the others are in stable condition.

Many things are different to 2002/2003. After the experience of SARS and other global respiratory diseases, China and other countries are better equipped to deal with them. The official response this time has been much quicker, in part due to the widespread use of social media in China. This allows ordinary people to put their own experiences, fears and suspicions on line – and forces the government to react more quickly.

The risk is greater than in 2002/2003. Chinese now travel all over the world in large numbers, as tourists, students and business people, increasing the danger of spreading the disease to more countries.

In an editorial on Thursday, the official China Daily summarised the scale of the threat. “Preventive measures work, which was verified in the fight against SARS in 2003. While hoping for the best, we need to ensure we are making every effort to prevent the worst.”

(Please note: Infection and death rates correct as at time of publishing)