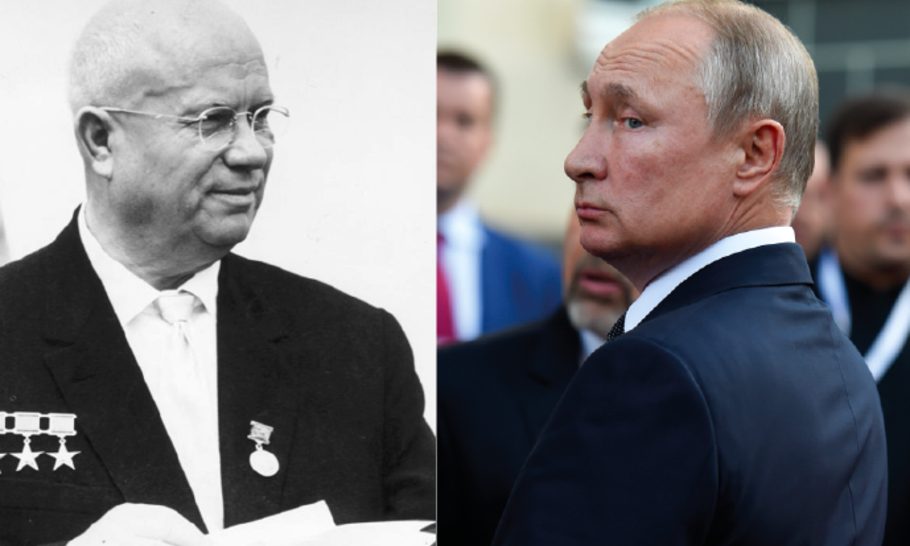 From Nikita Sergeyevich, General Secretary of the Association of ex-Politburo members, First Circle, 4th May, 2022

I know your fascination with Iosif Vissarionovich. You want to know everything what he does. Well, here is some news. He managed to find a Proposer and a Seconder for his 69th attempt to become a member of the Old Bolshevik Club. Alas, he got only 10% of the vote, far below the two-third majority required. He was also outclassed in a debate with Niccolo Macchiavelli about Realpolitik. I know you admire him, but he is only a poor shadow of his former self.

Now let me come to Ukraine, to your disastrous invasion. You were trigger-happy. You said: “It will take three days at maximum. A country led by a Jewish comedian might not even last three days.” We warned you. We quoted the Russian proverb: делить шкуру неубитого медведя (Don’t share out the skin of a bear until you have killed it.) We meant: “Don’t install a new government in Kyiv until you take Kyiv.”

You claim to be a student of Russian history. I am afraid your studies were not sufficiently profound. You should study a little more the history of our invasions. We only invaded a country when we could be certain to win. Let me tell you what we did in the last hundred years. We invaded Menshevik-led Georgia in the 1920s. We invaded Poland in 1939 when it was already prostrate. We invaded Finland later in the year, and the Baltic States (Lithuania, Latvia and Estonia) the year after.

We invaded Hungary in 1956, Czechoslovakia in 1968 and Afghanistan in 1979. That last one was a mistake but all the others were resounding successes. I know one of them particularly well; I led the assault on Hungary in 1956.

It seems to me that I have to restate our simple and clear principle: “Invade weaker countries and you will always win.” Have we ever invaded a stronger country? Did we invade Napoleon’s France at her prime? Did we invade Nazi Germany before it had been fatally weakened? We did not. Perhaps we should have done it. Anyway, that is by now water under the Volga.

Now let me come to a comparison that I’m sure you will not like: “You are in the same mess as the Americans were in Vietnam.” They flattened Hanoi. A fat lot of good it did to them. They never managed to overcome Vietcong resistance. Could the Americans have won in Vietnam? Perhaps they could have eventually won, but at what price ? By completely destroying the country, and facing instability at home. Nixon and Kissinger realised that that was not an option, so they had no alternative but to accept a humiliating withdrawal.

You are in the same position, whether you like it or not. To continue, trying to occupy the whole of Ukraine, would in theory be militarily possible. But at what price? Would you be able to pacify the country? You surely know about the two Ukrainian Stepans, Stepan Razin and Stepan Bandera, and the havoc they created. We had to execute one, and assassinate the other. Even in the best scenario in which we completely defeat the Ukrainians, annex the country and set up a government of our own, it is unlikely that we’ll be left in peace. There will be a third Stepan, a fourth Stepan, and a guerrilla war. We can impose terror. We can start another Ezhovshchina, as we call Iosif Vissarionovich’s Great Purge. That might succeed. Is that what you want?

You know very well that we had no objection to your invasion of Ukraine, but ours was a gradualist approach. You were too greedy. You wanted the whole country and you wanted a quick victory. We warned you. Now it is quite clear that to start an overall invasion of Ukraine was a blunder. Your progress has been slow, embarrassingly slow. You have to rethink your aims. Luckily, you are still in a good position. So, what should you do? The first thing is to stop the bloodshed. We propose:

The negotiations will take time, but by then time would not be at a premium. Initially, with the exception of clause (iii) the Ukrainians will reject all the other demands, but time will work for you. The Ukrainians will be under increasing pressure from the Europeans, anxious to see our oil and gas flowing again.
There is actually another solution. Resign, and let the problem be solved by your successor.