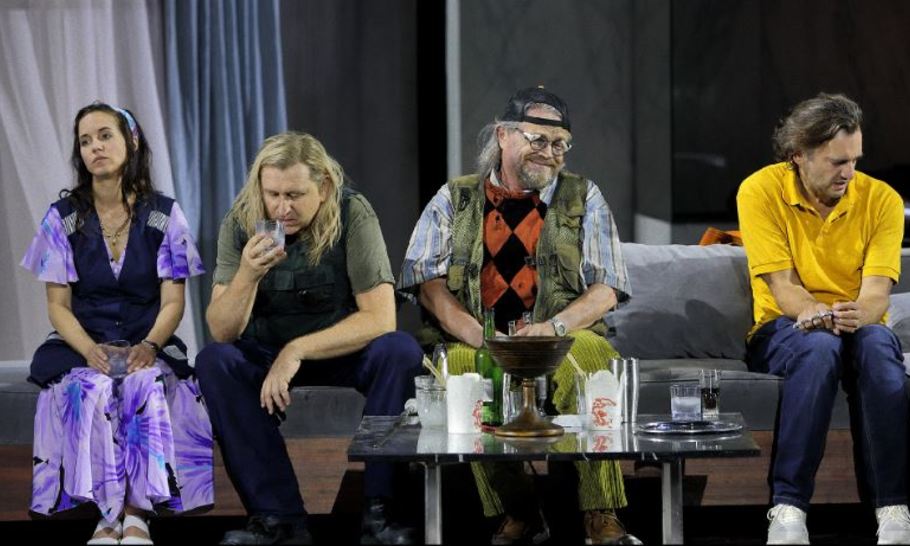 The new production of Wagner’s Ring cycle at Bayreuth never quite settles down. My review of Rheingold and Die Walküre, the first two operas of the tetralogy, appeared here last week, still giving the young Austrian director Valentin Schwarz the benefit of the doubt. By the third opera, Siegfried, some of the inconsistencies should be nearing resolution. The final work, Götterdämmerung, is supposed to complete that resolution in monumental style.

No chance. There was no Ring, no gold, and as the orchestra played Siegfried’s funeral march no one moved. The paddling pool of Rheingold, where the Rhine maidens appear as nannies with children, had become a deep but empty swimming pool. There Hagen kills Siegfried, while his vassals lie half asleep in the fenced-off area above. Brünnhilde then appears above, accompanied by the three Rhine maidens. A yellowish, rocky desert background glows in the distance — a future without water perhaps?

There is no resolution, though ideas aplenty. In the second and third operas, Brünnhilde’s horse Grane is a man in a three piece suit, a sort of chaperone who gets into conflict with Siegfried in the third opera when he approaches Brünnhilde. She stands, shrouded, in sunglasses, her face wrapped in bandages.

Then, in the final opera, Hagen’s half-brother, the hapless Gunther, wears a T-shirt emblazoned (in English) with the question: “Who the f*** is Grane?” Yet Brünnhilde’s horse, her faithful companion, is no longer there for her immolation in a funeral pyre that doesn’t exist. Despite her demand for its preparation, no one did anything.

The vassals merely lay around in semi-sleep and Gunther, realising all is lost, flings a polythene bag to the ground as he too abandons the scene, like his sister Gutrune. The bag contains the head of the dragon Fafner, who in the third opera appeared as a wealthy old man in a nursing home. He abuses one of the nurses, who then turns out to be the Woodbird. Abuse is endemic in this production, and she almost looks as if she might run off with Siegfried. In the final opera his blood-brotherhood with the sneaky Gunther is sealed with an unwanted kiss. As for Fafner in the third opera, Siegfried had no need to kill him. He simply died of a heart attack.

The overall concept is of huge wealth being passed from one generation to another in an extended family that has a problem with child abuse, but it never quite hangs together. Wotan at the start appears as a wheeler-dealer with a mobile phone, willing to be utterly ruthless, as when he shoots his own extra-marital son Siegmund in the second opera. This is Wagner’s Ring as dynastic soap opera, featuring at least one child in each opera. But where is it going? As one German audience member said to me, it is clearly not over at the end, but gives food for thought. Perhaps, but who cares? Certainly not Hagen, who reappeared at the top of the swimming pool, looked over the edge and promptly left.

Due to the pandemic this production was delayed and the team had plenty of time to make it work. They did not, so why should the rest of us try to synthesise Schwarz’s bleak vision of Wagner’s tetralogy? Since he is unwilling, or unable, to bring his all-too-clever ideas into a compelling coherence, he has failed. Despite some applause for the directing team, they were mostly greeted by deafening boos from all around.

The management of the Festival doubtless welcomes such conflicting responses. The more boos the better — they want to be controversial. But it is surely time for Bayreuth to once again invite a non-German-speaking team to produce The Ring. On the advice of the late Pierre Boulez, they did this in the centenary year 1976 by bringing in French director Patrice Chereau, with Boulez as conductor. He created a production that was initially hated, but later received a 45-minute ovation. That experience needs repeating in order to revitalise the Festival and make it more attractive to the world’s finest singers.

As Siegfried, Andreas Schager was first-rate in the eponymous opera, and since Stephen Gould was indisposed for Götterdämmerung, they flew in the American tenor Clay Hilley from holiday abroad and he did extremely well in the circumstances. The role of Brünnhilde was shared by Iréne Theorin in the second and final operas, and Daniela Köhler in the third, where Tomasz Konieczny was a firm Wanderer, having recovered from the collapse of his chair in Rheingold, and Olafur Sigurdarson was a terrific Alberich. In Götterdämmerung, Christa Mayer (Fricka in Rheingold) made a fine Waltraute, appealing to Brünnhilde to give up the non-existent ring. Michael Kupfer-Radecky (who had replaced Wotan after his chair collapsed) as Gunther, and Elisabeth Teige as Gutrune, were excellent as the half-siblings of Hagen, very well sung by Albert Dohmen.

Altogether this was an incoherent production of the Ring, though well sung and superbly conducted by Cornelius Meister, scattered boos notwithstanding. He had originally been prepared to conduct Tristan und Isolde, which opened this year’s festival, and should be congratulated for stepping in to replace Pietari Inkinen, who had to withdraw due to Covid. Ring cycles at Bayreuth are productions in progress, and the director can be expected to make modifications. But many of the audience who were there this year may not have the patience to return for the revival of a Ring that went nowhere.