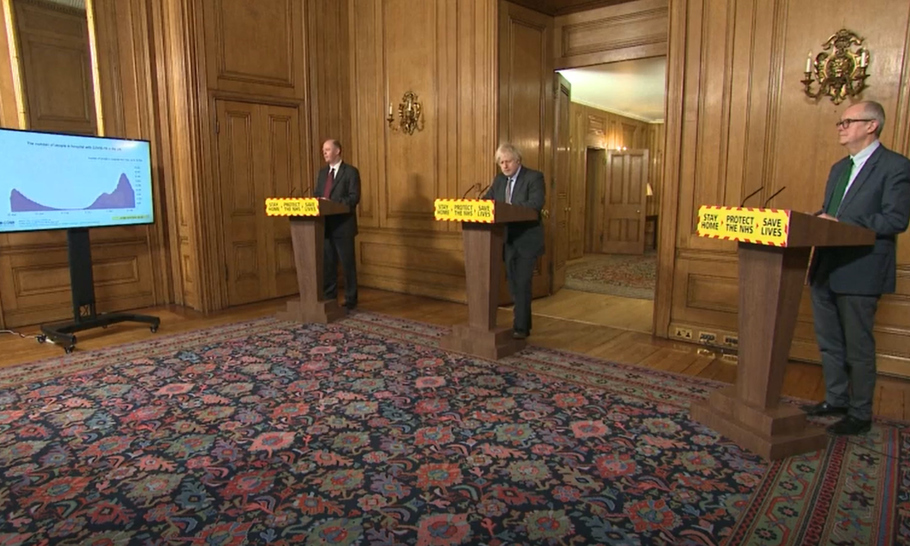 Watching the most recent Downing Street press conference, many people will have recalled the first one, nearly a year ago. Then, each televised apparition was dreaded, their grim faces harbingers of an unknown but deadly virus. We were transfixed by horror. Could this really be happening? It did happen. So far, 121,000 have died in the UK, 500,000 in the US, 2.5 million worldwide. Only by dint of extraordinary efforts has an even greater death toll been prevented, but tens of thousands more will die here before the ordeal is over.

Last night’s appearance, though, was quite different. Flanked by his senior medical and scientific officers, Chris Whitty and Sir Patrick Vallance, the Prime Minister presented a “road map” to lead the nation out of the pandemic. The hopes and fears of the Covid year we have just lived through were embodied in the triumvirate’s combination of cautious optimism and justified pride in the incredible achievement of the vaccination programme.

Most encouraging of all was the publication of three separate large-scale studies, all showing excellent results from the two vaccines used in the UK. In particular, the evidence from Scotland confirms that the Oxford-AstraZeneca vaccine offers protection from severe disease that is at least as good as its more expensive Pfizer-BioNTech counterpart. In the fourth week after the initial dose, the Oxford vaccine reduced the chances of hospitalisation by 94 per cent, compared to Pfizer’s 85 per cent. Both vaccines also performed well in reducing infection and transmission.

Such hard facts unfortunately come too late to dispel the disgraceful smear campaign against the Oxford vaccine in Germany, France and other EU countries which has resulted in many people refusing inoculation with this remarkably effective drug. There was never any evidence that it was “quasi-ineffective” in older people, as Emmanuel Macron claimed, apparently on the basis of an inaccurate story in a German newspaper. Now the evidence is clear, will the EU politicians and officials admit their mistake, endorse the vaccine, or even apologise? Not a chance. Yet this warped, embittered attitude towards all things British will have cost many lives on the Continent.

Here, we can feel confident that the decision to press ahead with the first dose rather than wait for the second — a decision that was also widely criticised by EU leaders — has now been vindicated. More than a third of the adult population in the UK has now been vaccinated and the effects of this are beginning to emerge from the dramatic fall in infections, hospitalisations and fatalities. Just a year ago hardly anyone believed that vaccines could be developed from scratch, tried and tested, then dispensed at unprecedented scale and speed. The Oxford vaccine was one of the first and, thanks to AstraZeneca producing it without regard to profit, it is likely to save more lives globally than any other. Its cheapness has been held against this “second-class vaccine” by competitors, but should be a source of pride.

Indeed, Britain has led the world in scientific breakthroughs many times in history and once again our laboratories have acquitted themselves with flying colours. The first effective treatment for Covid, the steroid Dexamethasone, was pioneered here. The authorisation of the first vaccines was fast-tracked by new regulatory methods (also criticised by none other than Angela Merkel) and this enabled the UK to steal a march on the rest of the world — apart from Israel, to whose example we are all indebted.

There is one concern that needs to be addressed: the reluctance of some ethnic minorities, particularly in the black community, to accept vaccination. Figures suggest that while overall the British take-up rate is well over 90 per cent, among these groups it is much lower. Various reasons have been offered for this resistance, but it is more urgent to tackle the problem head-on. Whatever happens must come from within the black British community, supported but not coerced by the Government. Doing nothing is not an option, though: if any significant group is in denial about the necessity of immunisation, that is a problem for the whole of society.

The answer might be a public information campaign such as we have never seen before. The antidote to the antivaxxers is to harness the power of celebrity. Famous or distinguished members of the black community — from music and film, sport and business, politics and the professions — should be filmed actually having the jab, live on TV and online. To avoid any impression of discrimination, they could be joined by celebrities from Asian or other minorities — and white British ones too.

It should be possible for the festive atmosphere, which many people have detected when receiving their jabs, to be communicated to viewers. Getting your vaccination is not just a duty to protect yourself, your family and society in general. It is also a huge morale-booster, one that should be celebrated.

Who knows? By the time the twenty-somethings are in line for their jabs, perhaps as soon as June, we should be allowed to have parties again. Now there’s a thought: jab parties! Perhaps the Roaring Twenties, so far a phrase that evokes only hollow laughs, are only just around the corner after all.