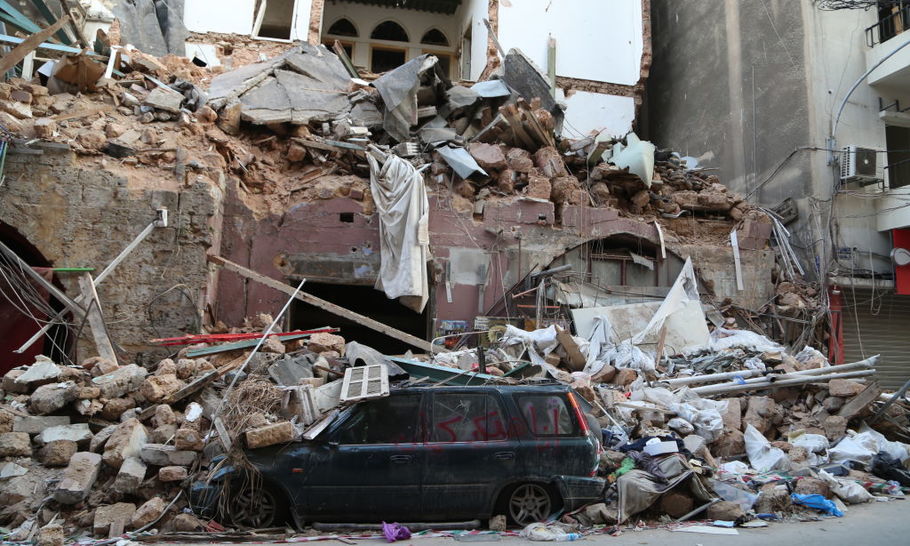 The detonation of 2,750 tonnes of explosive material in Beirut’s port area was probably the largest sub-atomic blast in recent history. The event and its place within the wider Lebanese tragedy have been exhaustively covered elsewhere and require no further elaboration. One anecdote captures the hideously tragi-comic nature of modern Lebanon. In order to retain a lucrative state monopoly on power, the Lebanese government made private electricity generators illegal. At the same time and in an attempt to stop the lights going out, it prohibited the companies that service the generators from going on strike. Throughout the coronavirus pandemic Lebanon has therefore depended on the criminal activities of its key workers — a perfect metaphor for a society bent out of shape by its own internal contradictions.

And then Mr Macron arrived on the scene to dispense his Jupiterian largesse. The French president is not known for his sense of irony or profound self-knowledge and neither was on conspicuous display during his brief visit. This year marks the centenary of Lebanon becoming a French protectorate and Mr Macron’s stately procession certainly had a neo-imperial quality, this despite the fact that Lebanon gained independence in 1943 while France itself was under foreign occupation. His denunciation of the distant, self-interested, corrupt and metro-centric political elites that have distorted Lebanese politics for private gain was both passionate and sincere; it could also have been lifted from a gilets jaunes manifesto, as social media across the Middle East was quick to point out.

But what Beirut has illustrated at a more fundamental level is the way in which events can be manipulated for sectarian advantage and that countervailing narratives will be the first shots fired in future conflict. The Levant in the early 21st Century has the same feel as the Balkans in the early 20th — that part of the map where race, tribe, religion, politics and culture combine to make a combustible mix that a single spark might detonate. The Ottoman, Austro-Hungarian, Serb, Muslim, imperialist, nationalist, catholic and orthodox Christian legacies of 1914 Sarajevo are now replaced by the Druze, Christian, Sunni and Shia Muslim, Israeli, Iranian, Hezbollah, Falangist, fundamentalist and liberal cosmopolitan influences playing out in Beirut today.

The Sarajevo/Beirut comparison is inexact in the sense that, mercifully, Beirut is yet to provide the pretext for a global conflict. But, in the sense that both illustrate the early mechanics of conflict in their respective epochs, the comparison works. In 1914, an assassination in Sarajevo initiated the mechanism of conflict in the mature industrial age: mass mobilisation and deployment by railway timetable that, once started, proved so difficult to stop. In 2020, an explosion in Beirut has initiated the instruments of conflict in the early digital age: communication and conspiracy in mischievous combination in an attempt to win narrative advantage.

Pressing the button to initiate the Beirut explosion would not seem to serve the strategic purposes of either of the main protagonists — Israel or Hezbollah — and the prosaic truth may well be that it was simply a tragic accident. That, of course, is an unacceptable answer for those seeking marginal advantage from events; neither does it serve the institutional interests of the internet which has a reputation for principled disruption to preserve. As a result, the narrative debate has intensified in the days since the blast.

First up was the theory that it was an Israeli airstrike against Hezbollah with Facebook showing a circled dot in the sky, just before the second explosion: 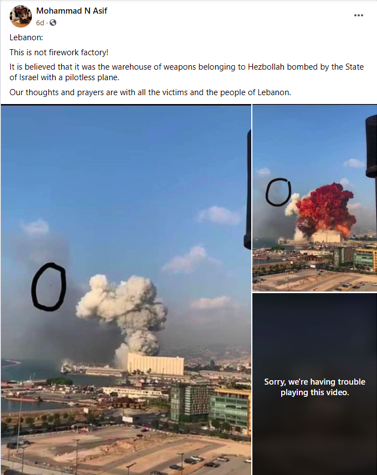 This was immediately countered by official Israeli sources and counter-claims made that Hezbollah, as the ruling-state-within-the-state, had to hold ultimate responsibility: 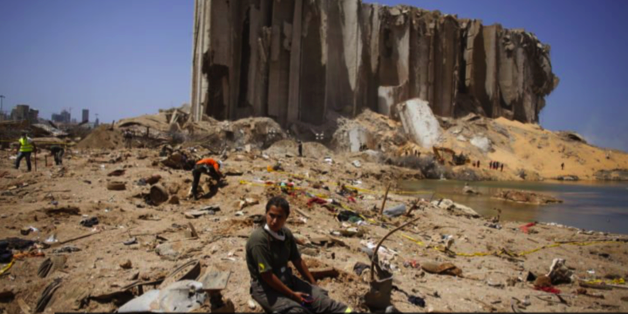 “I believe that explosives, ammunition, and missile fuel (which are highly volatile and flammable substances) were stored by Hezbollah in this warehouse after being shipped from Iran” — Lt. Col (res) Dr. Mordechai Kedar, BESA Center

In turn, this was refuted by Hassan Nasrallah, the head of Hezbollah, on YouTube: 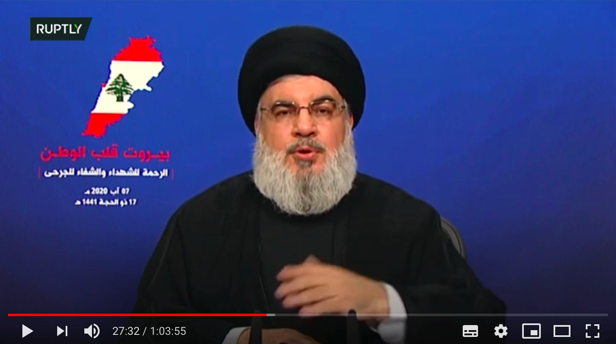 At which point the debate broadened into speculation that the mushroom cloud created a nuclear analogy: 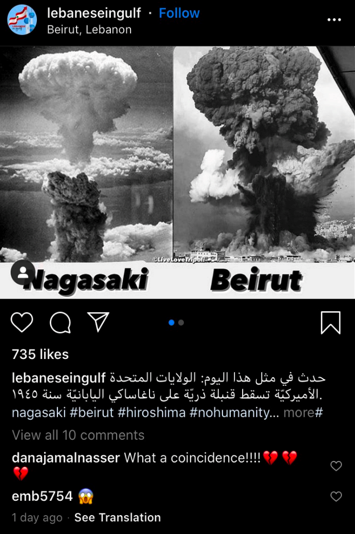 A point immediately seized upon by Ayatollah Kamenei’s twitter account to turn the nuclear reference against America. The video contained in this post is a classic example of Iranian misinformation (or State Sponsored Propaganda as it is known in the trade). It places a carefully prepared narrative lens over the event, to place the burden of historic guilt firmly on the US: 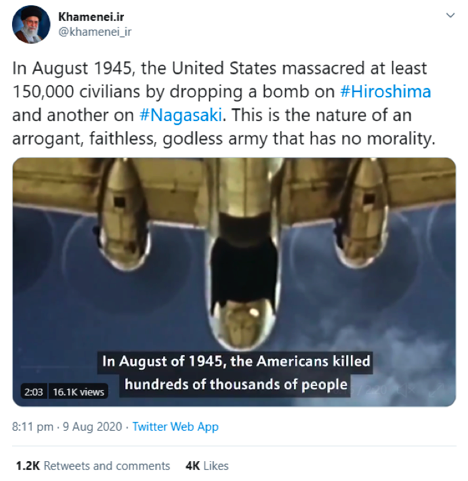 After which the trail split in the direction of French neo-imperialism: 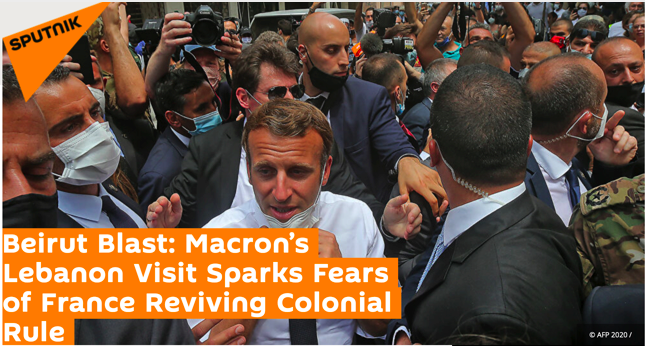 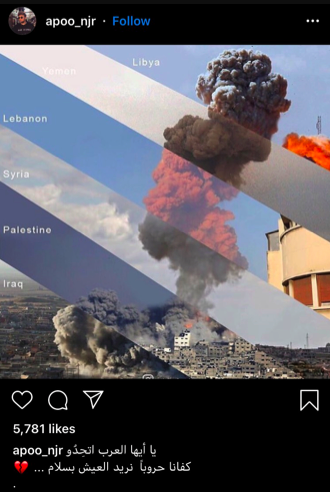 And back to the guilty men of Lebanese politics: 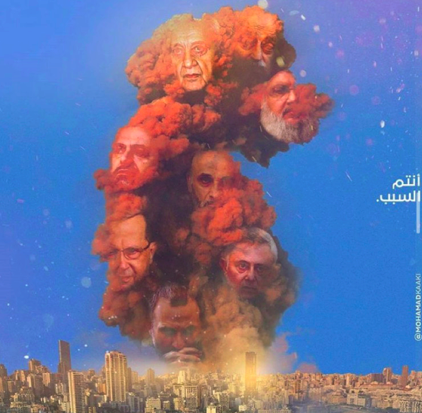 These images represent no more than an illustrative dip into some of the main themes emerging from Beirut and certainly do not capture the fevered speculation available on the more extreme, conspiracy-based sites. Nor does a single smoking gun emerge that traces a link back to a state sponsor attempting the non-attributable shaping of perception. However, in a region where the vital interests of Israel, Iran, Turkey and Russia are so heavily invested the one thing we can be sure of is that it is part of the ceaseless competition for narrative advantage in the information environment.

In turn, that ceaseless competition is re-defining the sense we have of what conflict means. Ideas like war and peace as definitive conditions characterised by the application or absence of military force seem an inadequate explanation for a world in which competition is perpetual and typically prosecuted by non-military means. All states are involved in this process but Russia probably leads the field. After the collapse of the Soviet Union the residual Russian state could no longer compete with the West in military terms and had to find alternatives forms of engagement. The concept of Hybrid Warfare emerged as a result.

Hybrid Warfare is power on the cheap, sees conflict as constant, seeks to test every boundary short of military violence and derives particular advantage from the centralised control available to autocratic government, able to pull every lever of national power with only limited oversight. At the point where centralised control bumps up against the naturally democratising nature of the Internet, Russia — and China too — has the inherent advantage of being able to regulate internet access within its own borders while exploiting global access elsewhere. Within this construct, disinformation is a national capability in the same ways that nuclear weapons or aircraft carriers are, but with far greater utility in that it can be deployed on a daily basis.

Recent US State Department analysis sees Russia’s disinformation system as a combination of official, proxy and unattributed channels and platforms, which are used to create and amplify false narratives. It goes on to identify five separate components: official government communications, state-funded global messaging, the cultivation of proxy sources, the manipulation of social media and cyber-enabled disinformation which separately or in serial combination seek to use information as a weapon. This structure grants plausible deniability to official sources, combines overt and clandestine means and has an agility that is capable of running rings around more conventionally minded opponents; in many ways, it gives a glimpse into the future nature of conflict.

Among strategic commentators, and rather improbably, the Victorian American navalist Alfred Thayer Mahan perhaps anticipated this condition best. In his eulogy to the Royal Navy in the Napoleonic Wars, The Influence of Sea Power on History, he wrote about unseen, implacable, remote and relentless maritime power “pressing ceaselessly upon the vitals of France”. The nature of war is immutable but the nature of warfare constantly adapts. The material blockade of the early 19th Century has been replaced by the cognitive blockade of disinformation in the early 21st but it serves the same purpose of gaining advantage in the wars we fight now.